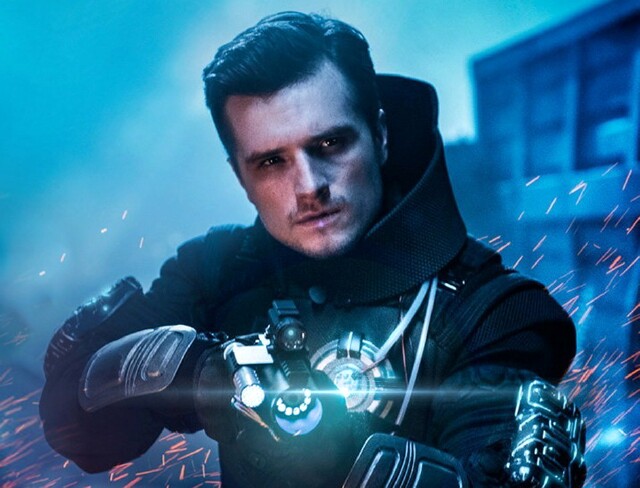 The headline on this review should be “Hulu’s Future Man: Better than I Thought It Would Be,” because nothing could be closer to the truth than that.  A pleasant surprise from Seth Rogen and Evan Goldberg (the men behind the hot AMC series Preacher), Future Man is what happens when one perfectly combines spoof-grade comedy writing with true-to-form sci-fi action.  With little to no hesitation I’d call this Hulu Original as award-worthy as any of the streaming giant’s other recent successes.  Let’s talk about how Future Man went from something I barely wanted to turn on to something I binged every episode of. Twice.  Within two days.

Basically, Josh Hutcherson (The Hunger Games) is Josh “My last name is impossibly convenient” Futterman, a janitor who lives with his parents and loves video games.  This one game in particular, Biotic Wars, is his favorite because it’s got a reputation for being unbeatable.  Of course, Josh eventually beats it, and faster than you can say “cliché” a pair of battle-grizzled time travelers from the future appear in his room.  As it turns out, Josh Futterman -- now referred to as “Future Man” -- is “The Savior,” and his seemingly friendly employer is actually the culprit responsible for the eventual dystopian future from which his new friends hail.

That’s all great, but time travel, sci-fi warriors and world-ending scenarios are nothing new.  The reason this series is 13 episodes of laugh-out-loud binge-ability is simple: It leans into itself.  Hard.

Eliza Coupe (Happy Endings) and Derek Wilson (Preacher) were perfectly cast as foul-mouthed futuristic badasses Tiger and Wolf, respectively, and when the situational humor surrounding Josh isn’t stealing the show, they steal it back and forth from each other.  The future world that Tiger and Wolf come from differs so greatly from ours that their logic is simplistic and survival-based, they both have huge knowledge gaps as far as what present day Earth was/is like, and their social skills are pretty much non-existent.  But, rather than dance around the ridiculousness of the ‘80s sci-fi action movie plot that is their lives, Tiger and Wolf both embrace the madness and behave the way two people with their specific backstory would genuinely behave.  Coupe and Wilson are so crass, yet so convincing that even though I recognized them from two other extremely different shows, I never once thought of them in those roles.  To me, they are Tiger and Wolf.

On the other hand, Josh acts as more of a surrogate for the audience.  He seems to say the things that viewers might be thinking at times, and is often the vehicle through which the writers call out their own jokes, or specifically name the pop culture references in whatever scene they’re in.  For example, when Tiger and Wolf first arrive they mention that their time machine only had a finite amount of fuel and would therefore only provide a certain number of “leaps.”  Immediately Josh calls the duo out on the Quantum Leap-ness of it all.

Additionally, Tiger and Wolf don’t know very much about “Time Travel 101,” leaving it to Josh to have to fill them in on the rules before they ruin something major.  These rules are things that Josh picked up from all the same iconic movies and TV shows the rest of us love and include things like: Don’t leave future tech in the past; blend in; don’t kill anybody, and most importantly, don’t “Back to the Future” yourself (which Josh almost does).

There are almost too many good things to say about Future Man.  I could talk about how the cast is full of awesome people like Ed Begley Jr. (Pineapple Express), Keith David (Community), Haley Joel Osment (The Sixth Sense), stand-up comedian Ron Funches, Paul Scheer (The League), Rapper/Actor Awkwafina (Neighbors 2), Britt Lower (Man Seeking Woman) and the late Glenne Headly, who is simply amazing as Josh’s mother Diane.  (Sadly, she passed away in June.)

I also could talk about when Josh and Wolf accidentally switched penises during a time jump, or about how this show inadvertently made me revisit the music of ‘80s chart topper Cory Hart.  If I even began talking about the uber-hilarious James Cameron episode we’d be here all day, but the truth is, none of that stuff mattered at all until I looked past FM’s metaphorical book cover and gave the show a chance.

Truth be told, I didn’t think there was any reason for this show to be good at first. On the surface, it’s just another futuristic sci-fi show featuring iffy, convenient time travel rules, cornily named clichés for supporting characters, and a hero whose last name is so on-the-nose it’s almost painful.  The special effects and stunt work alone are worth the binge, and the added layers of feature-worthy hilarity and legitimate character development only serve to improve what is already a surprisingly sterling production.

Future Man is fast-paced, action-packed and filled to the brim with the dirtiest of jokes.  In other words, it’s f**kin’ dope.