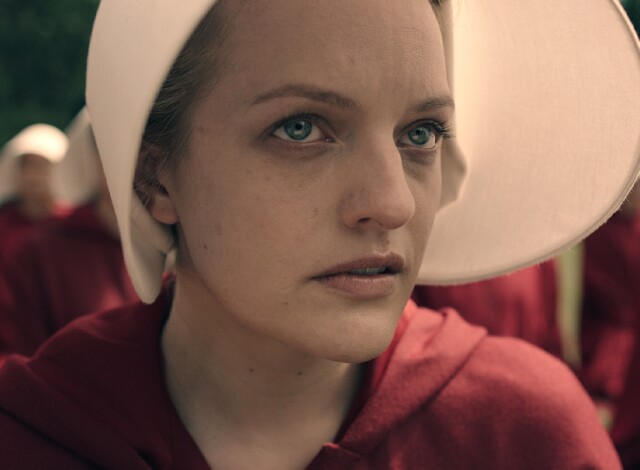 One look at some of the promotional materials for The Handmaid’s Tale and (if you aren’t familiar with Margaret Atwood’s 1985 novel) it’s easy to come to the conclusion that it is yet another period piece that is probably centered on the unfair treatment of women.  In a sense it is, but it’s not historical at all.  And yet, it feels like a warning of some kind, given the world we find ourselves living in at the moment.

Hulu’s riveting adaptation – which begins streaming today -- is actually about a not-so-distant future where to say things have changed for the worst would be the understatement of the century.  Apparently, the world as we know it has gone the way of the dodo, leaving behind a much more Children of Men-ish version of itself.  Through some assumed political f**kery the rights of every woman in this police state have been taken away and now, due to the rampant infertility that plagues the world and the new vaguely Christian regime that runs it, women with viable wombs are nothing more than unwilling surrogates for the privileged, with the remainder being placed into some kind of subservient role.

Handmaid’s is harrowing throughout, largely because it does a bang-up job of dispensing just enough information at just the right time to keep the viewer on edge.  I’m actually very glad that I was able to screen the first couple of episodes with no prior knowledge of the story, because it allowed me to become caught up in the drama and horror of it all while my questions arose in the order the showrunners probably intended.  It also gave the show the opportunity to inspire interest at its intended pace, which is important, because the pace and the bits we learn about protagonist Offred -- played by Elisabeth Moss (pictured at top) -- and the terrible reality she’s unlucky enough to live in define the level of tension and gravity certain moments have.  There are very few joys in this world, if any, but the ever-present possibility of shit getting even worse than it already horribly is keeps viewers just as alert as Offred constantly has to be.

There is a scene where Offred is participating in a "ritual" that essentially consists of her copulating with the man of the house she's assigned to. It's done fully clothed, and without any affection or emotion.  It's a terribly disturbing sequence, not only because of how cold and wrong it is, but also because the lady of the house (who, remember, is barren) holds the handmaid's arms down and basically supervises the endeavor.  The whole thing seems soul-crushingly awful for all involved.  Here is a woman who is physically unable to produce a child for her husband, assisting as the man she loves has intercourse with another woman who has no choice but to submit simply because she can do what the man's wife cannot.  This is where Moss truly impressed me.  One look into her eyes and it was clear Offred wasn't there.  There was no life behind her gaze, just the focus-less stare of a woman who had done what most abuse victims do in the face of constant attack.  She stopped feeling -- definitely not all together, but to get through a moment like that she most definitely had to flip an emotional off switch just to survive.

I’m not taking anything away from the rest of the cast, but I’d remiss if I didn’t assert that Moss is the backbone of this series.  There’s something accessible about those moments in all of her projects (in particular Mad Men and Top of the Lake) when her characters put their feet down. Whether they’re right or not, their convictions always feel genuine and deserving of our admiration.  The same holds true here.  Not surprisingly, her portrayal of Offred exudes an inner strength that’s immeasurable and seemingly unbreakable.  I spent every episode I screened nervously waiting for her comeuppance as intently as she probably does.

The Handmaid’s Tale is an intimate look at this dystopian totalitarian future from right there on the ground floor.  As Offred quietly fights to keep her sanity while traversing the landmine-riddled metaphorical warzone that is her life, viewers get in on that experience both as it happens andas it happened to her through her audible inner monologue and visceral intercut flashbacks.  This level of intimacy is integral, especially since the dominant themes in this series are pretty heavy.  Just off the top, Handmaid’s touches on women’s rights, homophobia, religion as a political tool and classism, to name only a few.  These are issues that many people feel strongly about, and they all share one common trait: They greatly affect us all and they very much need to be talked about.

Offred’s story gets increasingly captivating with every episode.  (As is its norm with original productions, Hulu is dropping one per week, the perpetual anticipation adding to the ever-tightening grip of the overall Handmaid’s experience.)  Although definitely fiction, it depicts a horrific world full of injustices that unfortunately doesn’t seem to be too far removed from a possible future for us all, especially when considering our nation’s current state of affairs.

Thankfully, The Handmaid’s Tale is here to warn us that we had better pay attention all the time and resist when necessary -- or maybe to keep us distracted while everything goes to sh*t.