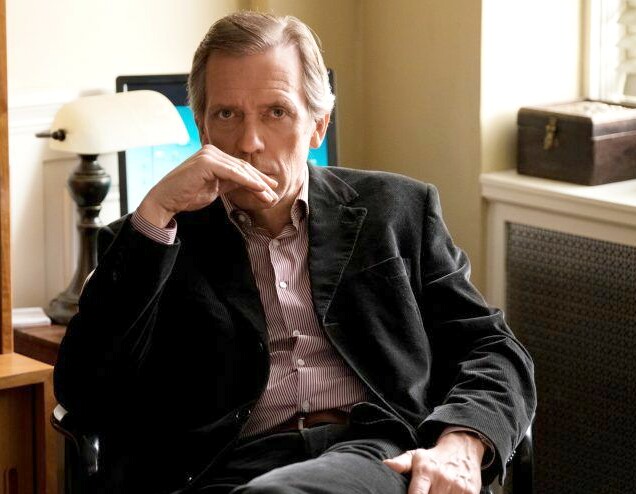 The Hulu original Chance offers Hugh Laurie yet another opportunity to star in a show that features his character’s surname as the title, and although the similarities don’t stop there, there aren’t as many as you’d think. He plays Dr. Eldon Chance, an empathetic neuro-psychiatrist who recommends patients to the appropriate therapist. Dr. Gregory House was a physician who’s specialty was curing fools while giving zero f--ks. Other than the both of them being doctors who look a hell of a lot like Hugh Laurie, pointing out any other similarities would be kind of a stretch -- at least until you consider their ever-shifting, emotion-based relationships with the law, and morality in general. Then they’re basically twins.

At the beginning of season one (now available in its entirety on Hulu) Dr. Chance is having a rather normal day in his rather normal middle-aged divorcé life when suddenly in walks a particularly attractive damsel in distress type named Jaclyn Blackstone (Gretchen Mol). She explains how she’s in an abusive marriage with a dirty yet decorated homicide detective named Raymond (Paul Adelstein) that has pushed her to the point of developing a second personality, the provocative Jackie Black. The more cynical Dr. House would’ve probably accused her of making the whole personality thing up, but in the case of Dr. Chance, this information tugged at his horny little heartstrings while she played him like the metaphorical fiddle he’d become.

The jury is out on whether or not this woman is shady throughout most of the season, and there will be no spoilers here, but honestly, I’ve been calling bullsh--t on her since the first episode. Her song, dance and sex appeal rope loverboy right in, and every episode basically consists of him making decision after terrible decision because of it.

Now I don’t know much about the code of ethics for medical professionals, but I’m pretty sure “try not to fall in love with your patients” is in there somewhere. Add to that the fact that Jaclyn/Jackie is a married woman who’s husband is as menacing as he is unstable and it’s easy to see that life for everyone involved is about to get a whole lot harder. This is the point where Dr. Chance’s morals start to get shaky. He knocked over the first domino when he began to ignore his professional ethics in order to interact with Jaclyn. That’s why every rule broken seems easier than the last for him, and I wouldn’t mind, if he was all in, but he seems to be torn almost the entire time. He’s constantly on the fence, not about whether or not he should be interested in this woman at all, but about how interested he should be at that particular moment depending on how dangerous his immediate situation has gotten.

Dr. House broke the law as well, as evidenced by the illegal recon missions he routinely sent his underlings on. Almost every episode consisted of his team of doctors breaking into their patients' homes in search of some plot device that would explain the disease from which they were suffering. Remember, these violation of ethics, both professional and moral, weren't attempts to save whatever patients he was dealing with. His motives, like those of Dr. Chance, were self-serving.

In this respect, both of Laurie's TV doctors are one and the same. Given their respective motivations their stances are on law, ethics and morality are basically equal. Sure, Chance is a bit of a push over -- the kind of guy you imagine would be a great mark for a conman -- and House is an arrogant dick -- the kind of guy who’d probably make a great conman. But at their cores they aren’t that much different then the rest of us, called to action by their personal interests, more often than not to the detriment of themselves and those around them.

Don’t get me wrong; Dr. Chance does seem to be an overall good guy. He genuinely loves his daughter, apparently has a great platonic relationship with his assistant (Greta Lee) and seems to want to do the right thing. He’s also well respected in his field. His problem is his inability to think with his big head when it comes to Mrs. Blackstone. He knows that the lengths to which he’s willing to go for her are not normal, especially since her husband is a Training Day-level psycho, but something about this woman just makes him say "screw it" every time. And that’s the fun part: watching intently, screaming (sometimes out loud) “Don’t go in there!” “Why are you calling her?!” “I knew you were gonna do that! I didn’t want you to do it, but you did it anyway, damn you!”  It’s just like watching a horror flick, except the monster in this movie is chaos -- easily avoidable chaos -- and these people you’ve become so invested in are now wandering aimlessly into its path. So you yell at the screen in an attempt to save your fictional friends from their obvious plights.

The question is: If they listened, would Chancestill be fun to watch? Maybe -- Hugh Laurie is always fun to watch -- but it wouldn't be as addictive. That's something Dr. House knew a lot about.