Hulu's "Woke" Wakes Us Up to the Complexity of Social Justice 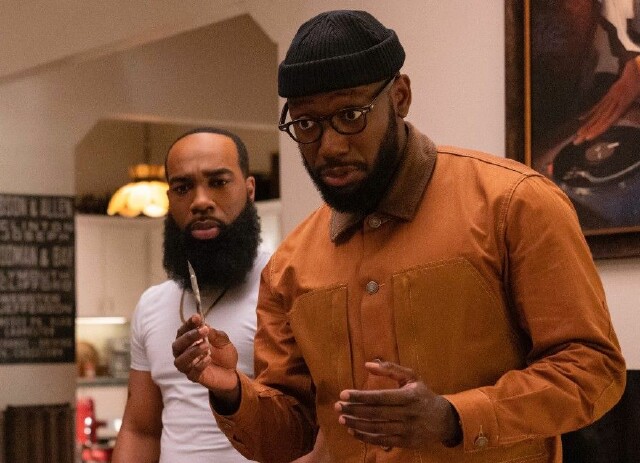 Two years ago, the world was a slightly different place, and by "a slightly different place" I mean it was on fire. Sometimes literally. Socio-politically, and most prominently, were the protests against racial inequality and police brutality, specifically the increasingly frequent murders of Black people during arrests or the service of warrants. It was … a lot, especially with a full-on pandemic happening in the foreground. And sure, now there's less COVID, and most of the literal fires are out -- which is something -- but the real work is far from finished. In fact, fighting for something that matters has never been harder, especially with everyone trying to ride the activism wave to a place that turns their social media platforms into equal parts status and profit. Which brings me to this new season of Hulu's original series Woke, in which Keef Knight, the cartoonist turned police brutality victim turned reluctant-then-not-so-reluctant activist at its center, finds out exactly how tricky the social justice world is to navigate.

For the uninitiated, Woke is a series created by real-life cartoonist Keith Knight (on whom Keef is based) and writer Marshall Todd, and follows Keef (Lamorne Morris) on his journey from being someone who didn't involve himself in social justice issues at all to someone who knew he had a place in all this whether he really wanted one or not. After turning his for-the-cameras fake apology pow wow with the officer who assaulted him into its own kind of protest, Keef has become a big name in the Bay Area activism world. His words -- also his tweets and live streams -- carry weight now, but with that weight comes great responsibility. And a lot of bullshit.

In my last piece on Woke, I focused pretty heavily on the social justice edu-tainment aspect of this series, but what I don't want to do this time around is overlook the comedy of it all. This show is hilarious, in a big way, and it displays that fact with such balance and finesse this season that I can't help but be impressed.

Last time, Keef's boy Clovis (T. Murph, recently interviewed by Juan Ayala for his Multicultural TV Talk podcast) spent his time focusing on his success, or lack thereof, with various ladies all season. This time around, it initially appears like he's still on the same wave (especially since he's been on a physical fitness kick since then), but he almost immediately finds himself smitten with a particular woman instead, which kind of throws him for a loop. He says as much to Ayana (Sasheer Zamata), the guys' friend and writer of local activist newspaper The Bay Arena, when he tells her about the encounter. "Afterwards we just laid around in the bed for hours, just talking and … scissoring," he sighs. To which Ayana replies, "Do you mean spooning?" (God, I hope that's what he meant, I thought. Turns out it wasn't.)

The humor does still serve the purpose of pushing particular themes, though, which is representative of the balance that I mentioned before. Gunther (Blake Anderson), Keef and Clovis's roommate, finds himself on a journey of self-discovery, which, after finding out that his Black roommates use washcloths in the shower, lands him in a support group for white people who are trying to be better allies to people of color. As it turns out, it's actually more of a white guilt confessional, which, as a legit ally already, isn't really what he's looking for. There's even a lady in there debating if she should celebrate the 40th birthday in her "white life" (her words) because it happens to occur during Black History Month.

After reassuring her it's okay to have a birthday, the moderator of the group, a Black man, decides to explain the group's nature to Gunther. "Some white people are so fragile that if you call them out they'll give up being an ally completely," he asserts. He goes on to say, "You don't have to adopt Black culture to be an ally. You're not hurting anyone by not knowing every single thing about us." Oh, white fragility, you rascal.

Clovis's Dad (Isiah Whitlock Jr.), who's entire episode is laugh-out-loud funny, by the way, also voiced his opinion, and made a solid point, during an interaction with his son and Keef where he criticizes this generation's style of activism. "We had guns!" he says. "We were talking about Black power! Now all y'all wanna do is matter." He continues in a whiney voice, "Oh please, Mr. White Man. Let us matter!"

Surely the situation's more nuanced than that, but I also see his point.

There are also some pretty sick burns throughout this new season. Clovis's Dad calls the van he lives off the grid in "the overground railroad." Clovis calls it "the tragic school bus." Later, someone tells Keef he looks like "a fake ass Malcom X," to which Ayana piles on, "more like Malcolm Why." The famous manifestations of Keef's subconscious -- talking pens, and garbage cans, and what not -- also make a return, though they don't play nearly as large a role as they did last season. This makes sense, considering that narratively Keef got a handle on most of that the first time around. It also probably serves the show better as a whole to have the majority of his conversations be with real people.

Woke has legitimately stepped up its game this season, and regardless of how much funnier it managed to get, it still covers a plethora of relevant topics. I mean, we're talking polyamory, Black people who don't identify as Black, Black Trauma on television, unintentional sexism, the weirdly corporate dark side to activism, and of course, the rampant homelessness that continues to plague this country.

Not unlike Keef, this second season the show has a true evolution from its former self. It's culturally educational, socially relevant, and incredibly funny. If it's not on your watchlist, maybe you're not as woke as you thought.

Seasons 1 and 2 of Woke are current available on Hulu.