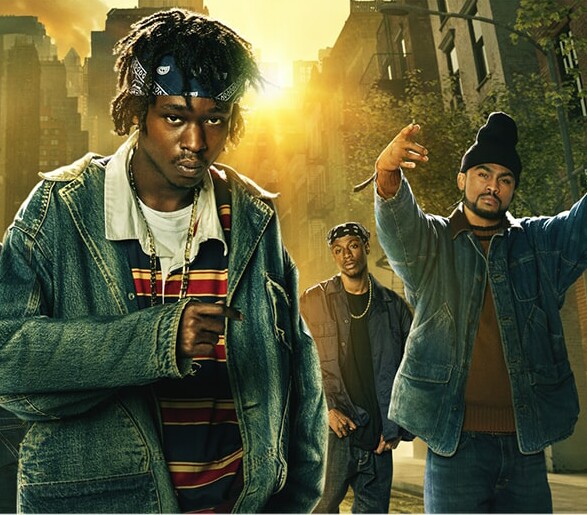 Wu-Tang: An American Saga is Hulu’s latest original offering, and while there aren’t too many people who haven’t heard of them, the iconic hardcore hip-hop group the series is named for is finally having its story told.  The question is, how will entry-level fans fare in the battle to connect the dots between the characters on the screen and their real-life alter egos?  And where does this series fit in the landscape of black-focused semi-historical dramas that has developed over the past few years?

Wu-Tang follows Bobby Diggs (a.k.a. The RZA), played by Ashton Sanders (Moonlight), on his journey from the unforgiving streets of 1990’s Staten Island to the annals of hip-hop legend.  As the visionary for the unquestionably influential crew that the Wu would one day become, this story is more or less Bobby’s, but still also revolves around the group’s original members: GZA, Old Dirty Bastard, Raekwon, Ghostface Killah and Method Man.  Inspectah Deck, U-God and Masta Killa are also original members of the group, though they haven’t appeared in the series first three episodes (which dropped on Sept. 4).

Is this show emotionally gripping and accurate as far as ‘90s Staten Island/NY-style physical and verbal swag go?  Absolutely.  Is its integration and use of the scratching and sampling style pervasive throughout that specific era of hardcore hip hop as an auditory and occasionally visual method of storytelling surprisingly fresh and impressive?  Obviously.  Is this series perfect?  No, but that’s okay.

What’s not okay are one or two of its other sins.

Let’s say you’ve heard of the Wu-Tang Clan but aren’t a die-hard fan.  Yes, you recognize the logo and know a song or two, but that’s more or less the extent of your knowledge.  If that sounds like you, then this series may be a bit more confusing than necessary.  That might not sound like the biggest deal, but it might be, assuming you care about knowing who you’re looking at.  See, in this series the characters aren’t credited as or referred to by the aliases their real-life counterparts are known for.  Maybe it doesn’t take a rocket scientist to figure out that Bobby Diggs is meant to be real-life Robert Diggs, or that Ason, the energetic grill-mouthed dude, is supposed to be a young Old Dirty Bastard, but the rest of the group may be a little harder for the layman to decipher.

For example, GZA (real name Gary E. Grice), is played by Johnell Young, and has only been referred to as “Gary” so far.  Raekwon’s character, played by Shameik Moore (Spiderman: Into the Spiderverse), only goes by the name “Sha,” and rapper Dave East’s character, Method Man, is called “Shotgun.”  Then there’s Siddiq Saunderson’s character, “Dennis ‘D-Love’ Jones,” who plays a prominent role as a young Ghostface Killah.  The thing is, besides a single advertisement (as far I’ve seen), who each person is supposed to be is never made explicitly clear.  I imagine it’s a legal issue, as in, it would be a bad idea, legally, to depict a living person in a semi-historical re-enactment of a crime.  Think Sha (a.k.a. Raekwon) shooting up D (a.k.a. Ghostface’s) apartment in the first episode.  Both Raekwon and Ghostface are alive, right now, so you can’t just outright say that they were involved in something like that, right?  But you can say that Sha and D were.

It could also just be that none of them have yet taken up their famed monikers at this point in the series, which would make sense if O.D.B.’s real name was Ason.  It’s not, though.  His name was Russell Tyrone Jones.

All that aside, the series is an enjoyable experience so far.  It very closely follows Bobby, and while the nuanced struggle between his familial responsibilities and his creative ambitions is a motivating aspect of the overall narrative, at this point (episode three) the show’s focus shouldn’t feel as though it’s only Bobby, Dennis and Sha, with Ason just kind of in tow for the most part.  T.J. Atoms delivers a spot on O.D.B., but I didn’t really learn anything about him.  This is different from Shameik Moore’s depiction of Raekwon, which was more powerful and also more informed.  He shows us who this man is, whereas with O.D.B. we’re given more of an impression.  I definitely understand why this happened, but I don’t think it had to be this way.

My favorite part of Wu-Tang: An American Sagais probably the least-considered implication of its existence:  Its place in the universe of semi-historical black-focused crime dramas that’s emerged over the past couple of years.  Technically, there is no official connection between any of the properties I’m about to mention but hear me out.  BET’s American Soul starts in the ‘70s and focuses on Don Cornelius’s crime-adjacent life as a black entertainment pioneer.  FX’s Snowfall then takes over in the ‘80s with a crack-crisis-driven plot set in a super-accurate Los Angeles.  Next up is VH1’s The Breaks,which began in the 1990’s and followed the emergence of hip hop from the underground to the mainstream.  This, of course, also involved a healthy amount of the seediness for which the entertainment business is generally known.  Now, we have Wu-Tang, overlapping The Breaks in ‘92.

I know that none of these shows are actually linked, but for the first time that I can think of I can imagine this timeline of events that is directly related to aspects and influences of cultures to which I very closely relate.  Even if that wasn’t the case, the thought of all these things happening around each other -- Don Cornelius prospering in the TV game while Franklin Saint is becoming a prominent drug lord, followed by Nikki Jones forcing her way into the New York hip-hop management business a mere two years before Wu-Tang officially forms just a train ride away -- is something new andblack for me to nerd out about.  That might not be everybody’s cup of tea, but it’s mine.

So, could this series maybe have been a little more accessible for those who may not know exactly what they’re walking into, but are still interested enough to give it a shot?  Maybe.  What’s more important, though, is that this is quality programming, regardless of a misstep or two, and this legendary rap group is now getting the treatment it deserves, similar to acts like New Edition or N.W.A.  The RZA himself created this series, along with Watchmen writer Alex Tse, and the group itself has been very hands-on during the creative process.