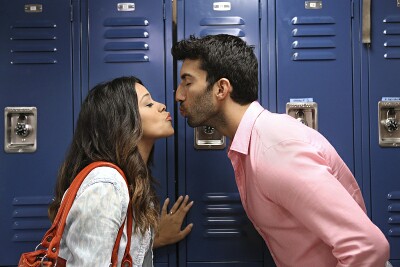 The CW’s much-buzzed-about “Jane the Virgin” is best described as a lightly comedic serial that deals with serious social and personal issues in telling the story of a sexually inexperienced young woman who as the result of a medical mix-up becomes pregnant via artificial insemination. It is in every way an ethnically diverse, multi-generational, modern family friendly show. The star of the series, which premieres tonight at 9 p.m., is a relatively unknown actress named Gina Rodriguez, who in July instantly charmed hundreds of critics and bloggers at the Summer 2014 Television Critics Association tour by putting into a fresh context the dialogue about diversity that has for decades been top of mind throughout the media.

Today, that dialogue is often defined by youthful bloggers and tweeters who are largely unaware of the great advances that have been made over the last twenty years in assembling ethnically diverse casts in primetime shows and top network executives repeating the same old comments about the work still to be done.

Talent and individuality almost never enter into the conversation. Rodriguez’s comments during the “Jane the Virgin” at TCA session changed all that.

Rodriguez revealed that before “Jane” (and after some well-received independent film work) she had been offered a role in “Devious Maids,” the Lifetime series about Latino maids working for rich people in Los Angeles, which she turned down. “I found it limiting that that was the one that was available to me,” she said. “I found it limiting for the stories that Latinos have, for the stories that Americans have. I feel like there's a perception that people have about Latinos in America specifically – as somebody [who grew] up in Chicago, English being my first language, Spanish being my second -- that we are perceived a very certain way.

“You know, being a maid is fantastic,” she continued. “I have many family members that have fed many of their families doing that job, but there are other stories that need to be told. And I think that the media is a venue and an avenue to educate and teach our next generation.

“Sadly, right now the perception they have of Latinos in America is very specific to maid, landscaper, pregnant teen,” she added. “Mind you, I am playing pregnant -- [but] not a teen.

“I didn't become an artist to be a millionaire,” Rodriguez explained. “I didn't become an actor to wear Louis Vuitton. I became an actor to change the way I grew up. [Growing up] I never saw myself on screen. I have two older sisters. One's an investment banker. The other one is an actor. I never saw us being played as investment bankers and actors. I realized how limiting that was for me. I would look at the screen and think, well, there's no way I can do it, because I'm not there.

“So [the] roles that I've chosen have been ones that I think are going to push forward the idea of my culture, of women, of beauty, my idea of liberating young girls [from] feeling that they have to look at a specific beauty type. I wasn't going to let my introduction to the world be one of a story that I think has been told many times. I wanted it to be a story that was going to liberate young girls and [let them] say, ‘Wow, there we are, and we're the doctors, we're the teachers, we're the writers and we're the lawyers, and I can do that, too. And I don't have to be a perfect size zero. I can be a perfect size me. So ‘Jane,’ I waited for her patiently.”

Rodriguez later said, “It's going to be really exciting to go on this journey with this girl that has a very serious thing happen to her and see the way she chooses maybe not the popular choices in life but the unpopular ones, i.e., her virginity. And I think that that's a really awesome thing to put out into the world right now where we are bombarded by twerking and -- don't get me wrong, I can twerk -- but we're bombarded by those images, and I see what they do to my niece and nephew that are four years old. I see what they do to my cousins that are 13. And I think, well, if I can use my art and what I love to do every day to change that perception, that's awesome. That's the blessing. That's the money for me.”

Rodriguez also spoke about the use of English subtitles when certain characters – especially Jane’s grandmother – speak in Spanish on the series. When she saw that in the script, she thought, “‘[Executive producer] Jennie [Snyder Urman] is in my house! Jennie knows my life!’ I do not speak back in Spanish to my grandmother at all. My grandmother only speaks to me in Spanish. She knows what I'm saying, but she refuses to speak English back, and I refuse to speak Spanish.

“There's a moment in the show where I'm describing to my grandmother how I got inseminated, and I say, ‘I don't even know how to say this in Spanish.’ We're talking to 50 million people in this country when we say that line. It is outrageous how Jennie encompassed the culture, and that first, second, third generation story to anybody that came over from outside that have the language in the house, have the traditional food in the house, and then hamburgers and hot dogs outside the house. It's pretty awesome.”