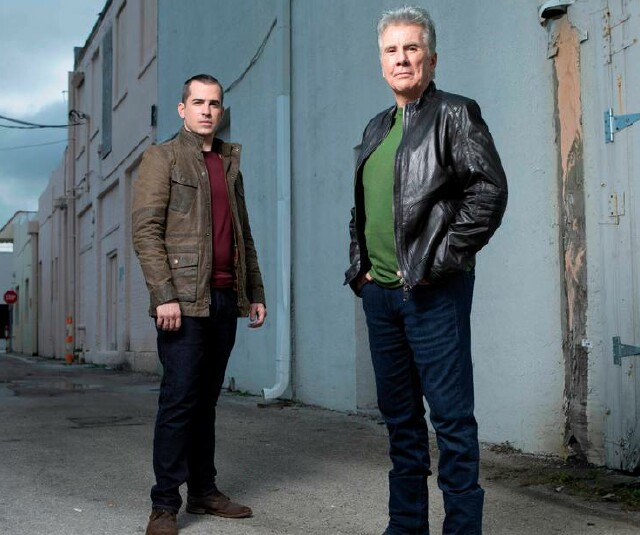 America is a very dangerous place.  That’s why I am happy to report that John Walsh, the justice advocate who turned his family’s personal tragedy into a national crime solving movement, is back on television.  This week we attended the premiere screening of his new program In Pursuit with John Walsh, which premiered on Investigation Discovery on January 16.

John and his son Callahan (pictured top left, with John), who team up to showcase unsolved crimes in the hopes that some of these cold cases can finally be solved, appeared on a panel at The Paley Center with Paula Zahn, whose own show on ID, On the Case, focuses on the investigations behind some of America’s most fascinating crimes.  Callahan has taken up his father’s cause, serving as the Strategic Advancement and Partnerships Senior Specialist for the National Center for Missing and Exploited Children.

In the premiere episode, In Pursuit focused on two unsolved crimes of husbands killing their wives and then eluding the police.  Each segment includes photos of the criminal with a toll-free number to call and a website address.  The program also features photos (age enhanced where needed) of two missing children in the hope that someone will recognize them and help reunite them with their families.

John Walsh explained that he wants to highlight unsolved crimes in small towns whose police forces are small and often not equipped to handle many of the heinous crimes in their communities.  He said that 70% of all police forces in America have fewer than 10 officers.  To help support local efforts, Walsh has set up a network of retired veteran police, marshals and detectives, called Team Adam after his son who was tragically kidnapped and murdered 27 years ago.  Team Adam participants fly in and help local forces fight for justice by doing immediate actions such as grid searches and hot interviews.  John is also committed to reforming the justice system to find more ways to protect child victims, such as enabling them to testify in the judges’ chambers instead of the courtroom.  “We know what it is like to wait for justice,” he stated.

In the case of his own son, John explained that the local Hollywood, Florida, police refused to act upon his abduction and the case languished until he was able to obtain all the police files from the case and hire his own private detective to investigate.  The case was then solved in one month.  The importance of having experienced investigators on the case and a system that is actively committed to pursuing justice cannot be understated. I speak from experience.

My mother-in-law was the victim of a homicide in Pasco County Florida in 1997.  We were fortunate that two local detectives were retired New York City homicide police who solved our case in two weeks.  But the then District Attorney of Florida would not prosecute, citing a lack of evidence … until one of the local detectives brought the case to the F.B.I. and the U.S. Federal court where it was successfully prosecuted.  This hard lesson underscored to me how lucky our family was to have two veteran law enforcers working on our behalf and how they took a risk to go over the heads of state agencies to seek full justice on the national level.

Callahan summed it up best when he said, “We want to make the world a smaller place for criminals.”  Not even home is safe; John reported that 35 families turned in their own sons after hearing about criminal cases on America’s Most Wanted,his previous and long-running show on Fox.  So far, the Walsh family’s efforts have helped bring to justice hundreds of criminals globally with arrests made as far away as India.  “The tips from the public are vital,” Callahan continued, “so we want to lower the threshold for them.”  To that end, they are leveraging social media such as Facebook.

I know first-hand that when a family member is a victim of a crime, there is never closure.  “But,” as John pointed out, “justice helps.”

In Pursuit with John Walsh is telecast Wednesday at 10 p.m. on ID: Investigation Discovery.