IFC Has Another Winner in "Baroness von Sketch Show" 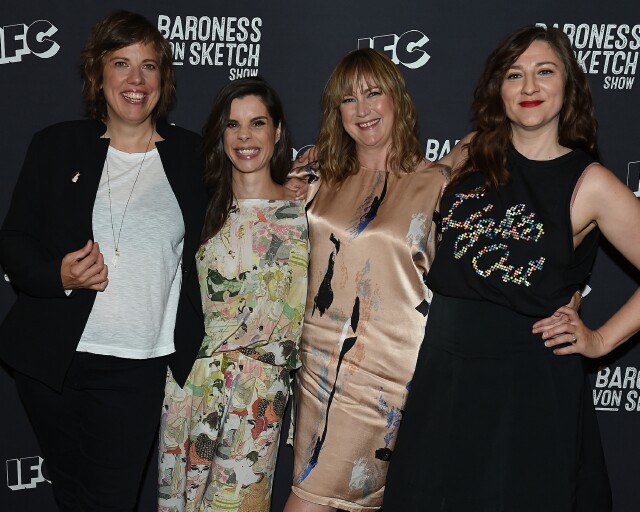 Women are hilarious.  That’s not exactly a hot take, but no show offers greater evidence of that observation than IFC’s newly acquired comedy Baroness von Sketch Show.  Think Key & Peele meets Portlandia, except it’s written by an almost all female staff, and there’s no underlying narrative or interspersed monologues.  The four creators, executive producers, and stars of the Canadian-borne BVSS are Carolyn Taylor, Meredith MacNeill, Aurora Browne and Jennifer Whalen, and their brand of rapid-fire sketch comedy is as side-splitting as it is relatable and honest.  (My editor tells me they took the Television Critics Association by storm last weekend when they appeared at the group’s Summer 2017 tour -- see images above and below.)  These female aficionados cover every aspect of feminism from lipstick to post-structural, and everything in-between, but the cherry on top is their collective aptitude for touching on everyday stuff like the workplace (birthdays, and bosses), social situations (drinking, and vacationing with friends), and social issues (motherhood, and being a lesbian).

It’s more refreshing than I can describe to see women at the helm of something so ridiculously funny.  The “business” (as it’s commonly referred to) is lousy with male comedians and comedy writers who often times write the sketches and shows that their female counterparts star in, and it only makes sense that when material is meant to represent any particular group of people it’s the people being represented that should (and would) know best how to create it. That is only part of the reason why Baroness von Sketch Show has so quickly become near and dear to my heart, because no man could ever have written it.  It had to be written by women to become what it is, and not just any women -- these women.  This comedy quartet has a collective voice that is intelligent, insightful and balls-out funny. 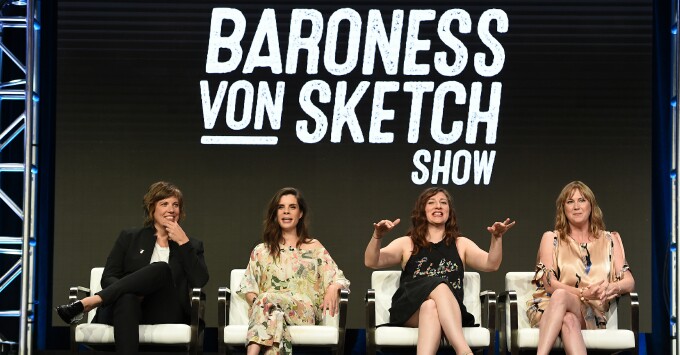 The “About IFC” page of IFC’s website clearly states, “IFC is the home of offbeat, unexpected comedies.”  “Offbeat” and “unexpected” are two of the three words I’d use to describe the 22 minutes of magic that is BVSS, and the third is “edgy.”  These women use observational and occasionally crass humor to shine a ruthlessly bold light on the more ridiculous parts of normative culture, all while keeping one eye on the truly important aspect of what they do: getting the laugh.  Too often do entertainers allow the comedy to play second fiddle to whatever message they’re trying to spread, but fortunately, with the Baronesses that is not the case at all.  Like one of my favorite examples of satire, the radio stations in the Grand Theft Auto series of videogames, Baronesslooks at life through a humorous lens of irony and exaggeration in a way that exposes and critiques the ridiculousness of everyday pretensions and sexual politics.  Yea, there are shows (like Broad Cityand 30 Rock)that have worked similar themes into their material, but for a show with no main characters, no plot to speak of and no continuity it’s truly amazing how this one was able to draw me in and keep me coming back all while quietly teaching me some shit. There aren’t too many shows that I can say the same for.

These ladies ain’t slouches, either.  MacNeill graduated from a three-year acting program at the Royal Academy of Dramatic Art in London, after which she started working with the Royal Shakespeare Company. Taylor honed her skills as part of the improv comedy enterprise The Second City in Toronto.  Browne also became part of Toronto’s Second City Troupe (after she graduated with a BFA from York University’s acting program) and Whalen is part of Second City Toronto as well, from which she is an alumna.  This doesn’t even begin to sum up the impressive CVs of this group, or the awards they’ve been nominated for and/or won (individually), but it does show that they aren’t just good by coincidence.  They’re great on purpose.

Normally, the fact that I hadn’t heard of these women prior to seeing the show would alarm me, probably because as Americans we have a tendency to stick with what we know and are comfortable with (which is why so many shitty franchises exist and shows we love are kept on the air until we hate them).  Luckily, I don’t mind stepping out of my comfort zone for something that may truly be worth my time, and thankfully, this was.  With the thousands of choices we’re allowed as consumers in this golden age of television, it can be hard to sift through the garbage and find the real gems.  This one is a glittering jewel, and IFC was smart to grab it.