IFC's "Brockmire" Goes Out With a Bang 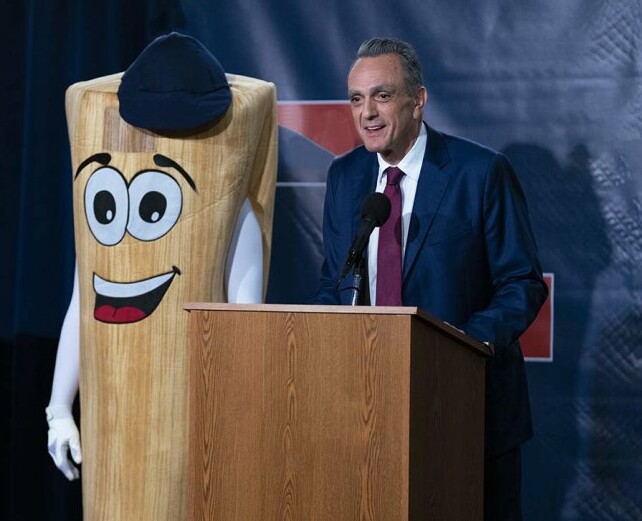 I’m just going to go ahead and say it: IFC’s Brockmire is the most socio-politically aware and emotionally evolved show on television.   A bold claim, I know, but it’s one that I am more than happy to defend.  Besides being responsible for some of the most cleverly crass jokes and monologues of all time, Brockmire also has been a painfully human journey through some of the darkest moments that the ever-conflicted fictional baseball announcer for which the series is named has ever gone.  In its fourth and final season, the evolution of the charismatic man in the plaid blazer is complete.

I once called the act of watching Jim Brockmire (Hank Azaria) “akin to driving past a fiery accident on the highway” (in a good way).  In the same breath I also said that he was “the perfect mix of charisma, narcissism and self-loathing,” and at the time it was the absolute truth.  By the end of season three, however, the opposite had become true, though he was still pretty charismatic.

The first season introduced us to the garbage fire that was Jimmy B’s life, while the second showed how success and a handful of debilitating addictions aren’t exactly the healthiest combination.  Season three chronicled the man’s arduous road to sobriety, and all the while it wasn’t just Brockmire’s trauma we explored; it was also the emotional wreckage of those closest to him that we got to sift through, as well.  This voyage over the scorched earth of Jim’s past teaches him to be someone who’s empathic, not narcissistic.  It taught him to be someone who practices self-love, instead of self-loathing.  As someone who’s dealt with similar issues in his past, I can’t even begin to explain how down-to-earth, relatable and unbelievably cathartic it all was to watch.

There’s a scene in the third season’s finale where Jim is having a particularly rough day and, during a walk he took to cool off, he finds himself sitting in a bar, drink in hand, contemplating breaking his sobriety … at least until he sees his sponsor, who’s apparently sh*tfaced.  He immediately forgets about his drink and starts talking to her about how she always tried to get him to acknowledge the “higher power” in his life.

“I don’t think I ever truly felt it’s presence until right now, because in this moment I’m exactly where I’m supposed to be, doing exactly what I’m supposed to be doing, and all the bad stuff that happened to me today that drove me to this bar served its purpose, ‘cause I was meant to be here to help you right now,” he says.

That quote, for me, sums up the entire series.  Everything that happens to Jim, everything we ride through with him, is not only necessary for his personal growth, but for that of the audience.  This connection to the material is what makes the underlying finality of the fourth season so palpable.

Speaking of the fourth season (spoiler alert), there’s a bit of jumping back and forth in time that occurs just about immediately after it begins.  Not unlike the final two episodes of Weeds, Brockmire jumps a decade into the future.  Unlike Weeds, it then splits the narrative, using moments from the present/now past to provide context for the future/new present, and vice versa, for the entire season.  It’s a move that allows for some very efficient storytelling, time wise.  It also allows for some solid socio-political predictions that I obviously wouldn’t want to see come to fruition, mostly because they were as dystopic as they were entertaining.  (We’re talking water shortages, wildfires, roving street gangs, the works).  That said, if any of them did come true, I would feel like I should’ve seen it all coming.

In one scene, Jim describes the “current” state of things on the east coast to a character I won’t name right now but who is wonderfully played by Reina Hardesty, and with that classic Brockmire brand of colorful commentary he says, “New York is now just a flooded playground for the one percent of the one percent.  The Bronx is now Brooklyn.  Brooklyn is now Manhattan.  Manhattan is now Dubai.  And darling, the worst part is, Staten Island is still just Staten Island.  That thing is a civic black hole that the light of gentrification and human decency can’t penetrate.”

There is so much to love about this show.  Its depth, its wit, Jim’s grayed look after the time jump, it’s all wonderful, and watching the graceful landing of a series that just kept doin’ the damn thing all the way until the end was definitely bittersweet, but ultimately satisfying.  The whole thing comes full circle in an edifying way.  I usually feel like the maximum length for comedies is five to seven seasons, but when they come as heavily packed a dramedy as this one, a shorter run (like the four seasons we got) seems to be a way better fit.  There was a reason why I named Brockmire one of my Top Ten shows of 2018, and there’s a reason why I feel like a part of me will end when the show does.  Great shows always hit me, but this time it was personal.

Before checking back in with Brockmire, read our classic Lunch at Michael's interview with Hank Azaria.

Brockmire is telecast Wednesday at 10 p.m. on IFC.