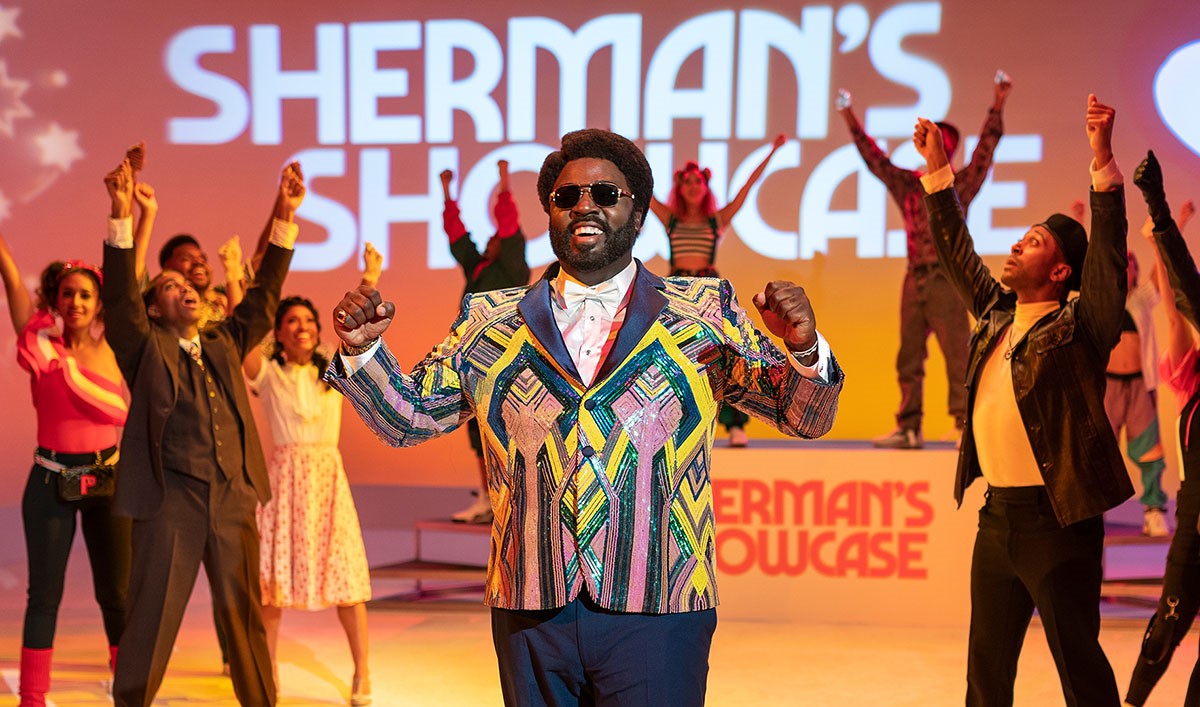 In recognition of Juneteenth, season one of Sherman's Showcase will be replayed tonight from 7-11 p.m. ET and its Black History Month Spectacular … in June will be telecast tonight at 11 p.m. ET on IFC. Season 2 has already been greenlit.  In 2019, I touted IFC's Sherman's Showcase as "the funniest show of the year."  I stand by that.  Now, in what will probably be touted as the most un-funny year of the decade, show creators and stars Diallo Riddle and Bashir Salahuddin have found a way to continue being as "unapologetically Black" as possible.  How?  By using their platform to celebrate Black History Month … in June.

Obviously, saying that America's been through a lot this year is an understatement.  Between the unprecedented effects of the global COVID-19 pandemic and the events leading up to and following the egregious murder of George Floyd by Minneapolis law enforcement, the world as we all knew it has changed -- including the way we go to school, work, shop, live and even watch television.  There are droves of people protesting around the world every day so that we all see positive change (specifically in areas like racial equality and police reform) and some of these changes are finally starting.  Serious talks are being had about defunding and demilitarizing police, Aunt Jemima and Uncle Ben are history folks, and, finally, out the door with them is the constant overlooking of one of our country's most important holidays: Juneteenth.

Juneteenth (June 19th) marks the true end of slavery, the day that Major General Granger led Union soldiers to Texas in 1865 with the news that the war was over and that the previously enslaved were free.  Don't remember learning about this holiday in school?  Neither do I.  I learned about it the same way I learned about the Black Wall Street Massacre in Tulsa, OK: on television.

This finally brings us back to Sherman's Showcase.  Now let me be clear: Sherman's Showcase is ridiculous, and is in no way a means of learning actual Black history.  That said, I can think of few things that are Blacker than this show and the purity in which it exists.  I had the pleasure of speaking with both Riddle and Salahuddin recently (amazing convo, by the way), and they enlightened me as to how the BHM/Juneteenth episode came about, and their general modus operandi when it comes to this hilarious comedy.

According to Mr. Riddle, the network (IFC) proposed doing a "very special episode" of Sherman's sometime in 2020, to which the guys said, "Let's do a Black History Month special in February."  Due to scheduling conflicts that was no longer an option, so naturally, the idea was proposed to do it in June.  This initially sounded like celebrating Christmas in May to the fellas, but given the nature of the Showcase and its equally over-the-top host, it serendipitously seemed like the perfect thematic fit.  Timing-wise, the through line of an authentic Black experience fit the show's core vibe as well.

"It just seemed like, in a weird way, now is a much better time to sort of like open up the door on what, you know, the black perspective is," said Riddle.  "Obviously we don't think there's any one Black experience, but we are Black, we feel like our show's unapologetically so, and it speaks to what our interests are."

The work that these two gentlemen put into this show is extensive, not just on a cultural level, but on a pop culture enthusiast level as well.  After mentioning how I caught a subtle Easter egg in the show's upcoming special episode, Mr. Salahuddin had this to say:  "It really brings joy to our hearts that you would mention that because Diallo and I are big sci-fi fans, we love fantasy, we love the lore aspect, we love the fact that those worlds are so deep and so complex, and we kind of try to do that even though it's a sketch comedy show."

Mr. Riddle, who's apparently also a fan of one of my favorite shows, Community, explained, "Dan Harmon always put like a weird C story in the background of some episodes of Community, and we always thought that was really cool.  [We thought] 'we gotta do stuff like that' just for people like you who notice something like the Easter egg.  That is 100% intentional.  That's a great catch."

We went on to discuss the talent in the series, specifically comedian Rob Haze -- who is a beast when it comes to bringing Sherman's brand of exaggerated characters to life -- and what their goals are as far as the show's legacy.  Haze has played sidesplittingly hilarious characters including the likes of Young Morris Day, the "Beat Tight Face" guy, and most recently, a ridiculously entertaining depiction of a pre-2010 Terrence Howard. The duo praised Mr. Haze's abilities both in the writer's room and in front of the camera.  "We feel super lucky to have Rob as part of the Sherman's Showcase family," Bashir proclaimed.

As far as legacy goes, Diallo said, "We kind of go out of our way to hire writer/performers the same way that Bashir and I are writers and performers, and we feel like we're cultivating potentially a-whole-nother generation of just really, really funny people.  We see our show the same way that Kenan [Ivory Wayans] saw In Living Color.  He was like, 'I'm gonna use it as a platform to put on a whole generation of people. That's our goal, anyway."

Now, no one's ever said it about me, but I'll personally admit that I hold Black television to a higher standard than the rest.  I feel as though I have to, because people of color have never received the same number of opportunities as their less colorful counterparts.  So, when a "Black show" finally gets its time to shine, it doesn't just need to be good, it needs to be amazing, because Black people have had to constantly prove themselves and their worth to continue getting these opportunities, and I'll be damned if I'll allow mediocrity to ruin future opportunities for us.  I feel as though Sherman's Showcase carries that same type of cross for itself, not in the exact same capacity that I do as a critic, but in the same protective way that we all do as Black people trying to do our part to protect and further the culture.