IFC's "Sherman's Showcase" Is the Funniest Show of the Year 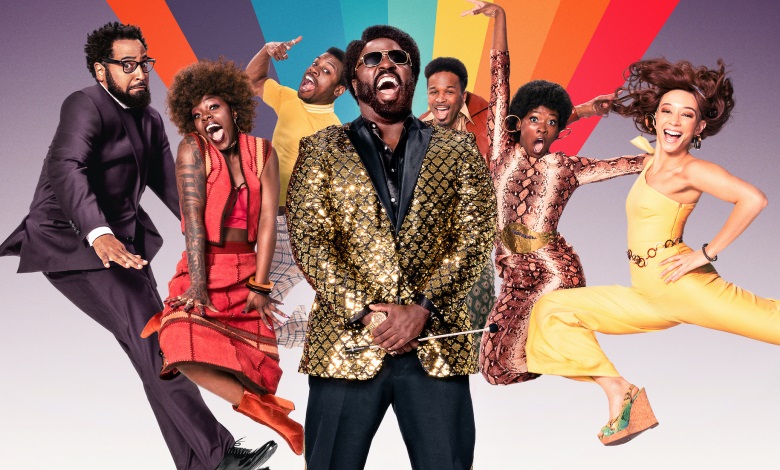 A documentary style show that revels in the past glories of a fictional musical variety show of the same name, Sherman’s Showcase is probably the funniest thing to come out of IFC since that one time they let me do stand up.  Filled to the brim with over-the-top characters, celebrity cameos and some seriously hilarious writing, this show feels like the unapologetically black lovechild of Comedy Bang! Bang! and Documentary Now!  Seriously.  All that’s missing is an exclamation point in the title.

Sherman’s Showcase is essentially a fake version of Soul Train, with its Don Cornelius-type hosting spot belonging to Sherman McDaniel, played to comedic perfection by Bashir Salahuddin (who’s probably better known as “Keith Bang” on GLOW or “Pastor Craig” on Superstore).  Salahuddin’s real-life creative partner in this endeavor, and the actor playing McDaniel’s fictional producer “Dutch Shepherd,” is none other than Diallo Riddle (a.k.a. “Stevie” on Marlon). Their almost identical CVs imply that they’ve been writing together for most if not the entirety of their respective careers, and after viewing their most recent collaboration it’s clear that these two belong together.

Format-wise, the similarities to Comedy Bang! Bang! are undeniable.  The opening title sequence is animated and follows the same template mostly, with episode-specific changes made for thematic reasons. Whenever an intro precedes said title sequence, its involves some sort of Documentary Now!-style celebrity appearance. It’s usually a real celebrity talking about the fictional history of the show, or a fictional version of a celebrity doing the same (think real-life John Legend and fake-Mary J. Blige).

In the same way that Soul Train was a conduit for spreading black culture through white America in the early Seventies, so was Sherman’s Showcase a show that did the same. The difference is it did it through commercials starring Frederick Douglas, it’s been on since the Seventies (but also the Fifties, apparently), and I guess nobody cares about cussing or saying the N-word in the Shermiverse, because both happen a lot. Truth be told, it’s legitimately one of my favorite things about the show.

But Ainz, what did you mean before, when you called it “unapologetically black”? Well, I meant that the best stuff coming out of this show is the content that would stereotypically have a great chance of existing in your personal lexicon if you were lucky enough to grow up black. Not knowing who Mary J. Blige or Chamillionaire are, or that black women wrap their hair before bed, or what the “real title” of Ginuwine’s “Differences” is, might work against you in some scenarios. That said, Sherm’s level of general accessibility is on par with that of black-ish, making it as afro-centric as possible while not alienating even your most non-brown of friends.

Besides celebrity appearances that include the likes of Tiffany Haddish, Morris Day, Quincy Jones, Ne-Yo, Marlon Wayans and so many more, Sherman’s Showcase is also a one stop shop for some of the highest quality joke tracks ever recorded.  Fictional songstress Liz Giant’s “Gossamer Tunic” is a legitimately dope Eighties-style pop joint, and “Time Loop” by the also fictional funk band Galaxia is good enough that in my mind the soundtrack to this show would already be bought and paid for (if it were released).  In the past I felt similarly about the soundtrack of Walk Hard: The Dewey Cox Story, which was also full of funny tracks with formidable grooves and instrumentation, but unlike that soundtrack, this one has enough flavor to actually get bumped in my car.

On an aesthetic level, the visuals do a lot of heavy lifting, as well. The showcase’s stage, lighting and camera work all give off that Soul Train vibe, and Salahuddin’s presence and performance bring it all home. Sherman McDaniels is confident, yet insecure; both bumbling and talented. Salahuddin is absolutely perfect in the role, and has no issue being the straight man, the funny man, or the foil, depending on what the scene needs. Similar things can be said for Riddle, who, like Salahuddin, constantly finds himself playing more than one role, both figuratively and literally.

Also, if we’re talking aesthetics, I need to shout out the costume designers. Not only does everyone in every scene always look the part, but Sherman’s blazers specifically deserve special props. Each episode of Showcase showcases a completely new and unique blazer made of something that looks luxurious and is most probably handcrafted. For real, the superior level of quality on these things is obvious.  Someone worked quite hard on them, and trust, it has not gone unnoticed.

Currently clocking in at only eight episodes for the first season, this show hasn’t even been released yet and I’m already pining for a second season. Comedy Bang! Bang! (may it rest in peace) got a solid five seasons, Documentary Now! is going on four, and the fictional Sherman’s Showcase got like four decades.  Can the real Sherman’s Showcase get some love, too?

Two. That’s a good number. Give them a second season, because seriously, they’ve earned it.