In BBC America’s “Killing Eve” Execution Is Everything 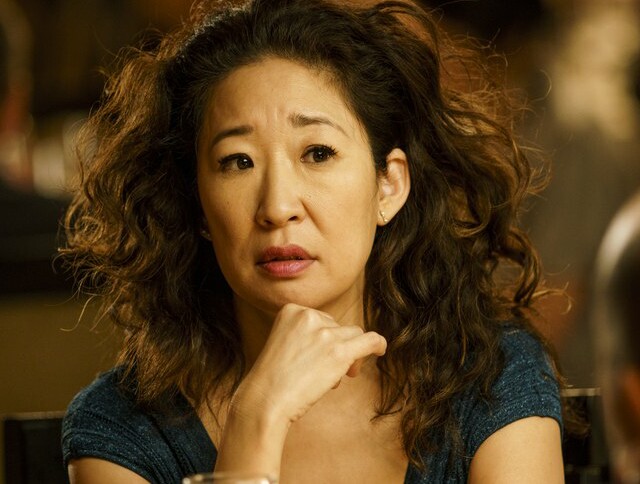 Killing Eve is fresh, stylistic, intriguing and, above all, intoxicating.  It had slipped past me, but after this BBC America series received all those nominations for this year’s Television Critics Association Awards (including Outstanding New Program, Outstanding Achievement in Drama, Program of the Year and nods to its two stars for Individual Achievement in Drama) I gave it a binge.  And now, in much the same way that the two lead characters can’t stop thinking about each other, I can’t get them out of my head.

This drama/thriller follows Eve Polastri (five-time Emmy nominee Sandra Oh, now deserving of a sixth), an MI5 Security Officer turned MI6 Intelligence Agent leading a secret task force formed with the goal of finding a talented and ruthless international assassin named Villanelle (Jodie Comer).  Their riveting game of cat and mouse is as unpredictable as it is gripping, probably because Oh (pictured at top and below right) and Comer (below left) are veritable powerhouses when it comes to bringing these convincingly grounded, multi-layered adversaries to life.  I know … cops chasing killers isn’t the most original premise, but as far as I can tell, the writers are fully aware that much like an assassination, execution is everything. 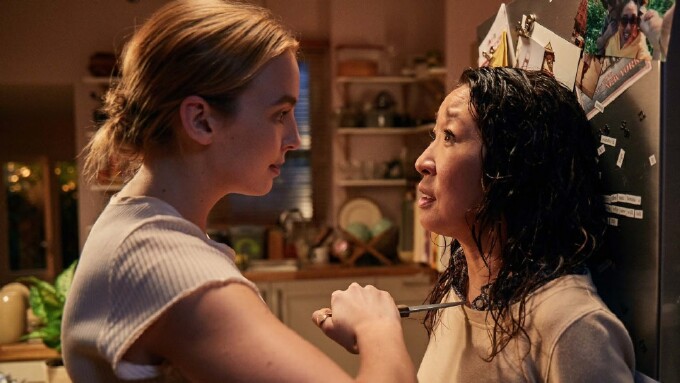 Most impressive about Killing Eve is the impeccable balancing act it manages to pull off.  Rather than taking the safer, more clichéd route, Evemakes both Eve and Villanelle real people, albeit very different individuals.  Eve is down-to-Earth as hell, driven, intelligent and super insightful.  Villanelle on the other hand is cold, calculating and has surprisingly simple motivations.  How simple?  In her words, “Normal stuff. Nice life.  Cool flat.  Fun job.”  Her desires are no different than any other twenty-something.  The only difference is that most twenty-something’s go get a job at the mall or something -- this one chose murder for hire.

The relationship between Eve and Villanelle is complicated at best, but also a shining example of how truly similar they really are.  Let’s look at the facts.  In the beginning of the season the yet-to-be-identified Villanelle was described as someone highly capable who’d been operating for a couple of years now and was probably bored of hiding in the shadows.  It isn’t until the case involving one of her victims lands on Eve’s lap that things really start to get exciting for her (which is saying a lot because she seems to really get a kick out of killing people).

The same is true of Eve.  Before getting involved in Villanelle’s madness she had a calm, seemingly uneventful life.  She’s married to a very kind Polish dude who doesn’t do much in the show other than help people and worry about Eve.  But once Eve gets involved with little Ms. Kills-a-lot things around her start falling apart.  Nothing major; just stuff like her career, her marriage and her best friend’s ability to, erm, live.  None of this, however, changes the fact that they are both, for lack of a better description, obsessed with each other.  It’s something that’s fairly obvious on Villanelle’s part (‘cause she’s nuts), but Eve’s obsession is cleverly masked by the use of another popular cliché: friendly nay-sayers.

Eve’s MI6 task force isn’t necessarily out to get Villanelle specifically; their end goal is the people she works for, whom they believe to be a shadowy group known as “The Twelve.”  In pretty much every situation Eve thinks that finding Villanelle will bring them all the answers they need, but her ideas tend to get shot down by someone around her (usually as some sort of admonishment about listening to her gut instead of the facts, which don’t always point in the direction Eve wants to go).  This gave me the feeling that her partners were being contrarian in order for there to be drama because the story called for it on a narrative level, which is, of course, was not true.

Eve and Villanelle, like Batman and the Joker, have kind of given each other’s lives purpose in a way, and like most unhealthy relationships, this one is toxic and violent.  Eve is not your run of the mill gun-toting TV cop.  She’s a cerebral person whose initial curiosity and eventual obsession with her perp causes her to leap head first into dangerous situations.  She literally enjoys the chase.

Again, the same goes for our lady killer, who is thrilled -- no, aroused -- by everything about Eve (including her perfect hair).  She even has a kind of psychotic mischievousness to her that, while being objectively terrifying in real life, is hilarious to watch and makes her kind of likable.  Everything’s a joke to her, and oddly enough, she seems like a nice person; at least up until the point where she butchers someone.

It’s kind of ironic, ya’ know?  The title of this show certainly suggests something specific, and for the first few episodes I truly thought that was a possibility, but after a certain point I just knew that Villanelle would never actually kill Eve.  She needs her too much.  Hell, they need each other too much.  She (V) already approaches her vocation (and life in general) with the carefree attitude of a bored princess, and without Eve her life would be just that: boring.

So, maybe what I just watched was just the longest, bloodiest, most unorthodox wooing ever.  Well, if that’s true then we’re about to see their first big fight because (spoiler alert) after a surprisingly calm conversation at V’s safehouse, Eve definitely (literally) stabbed her right in the gut, and then immediately regretted it.  Villanelle did not take kindly to that, and escaped, barely missing Eve with her gun.  And she’s not exactly stable.

Maybe during season two Killing Eve will finally live up to its name.  (These days no character on any series is safe; am I right?)  Hopefully not though.  I could watch these two go back and forth for years.