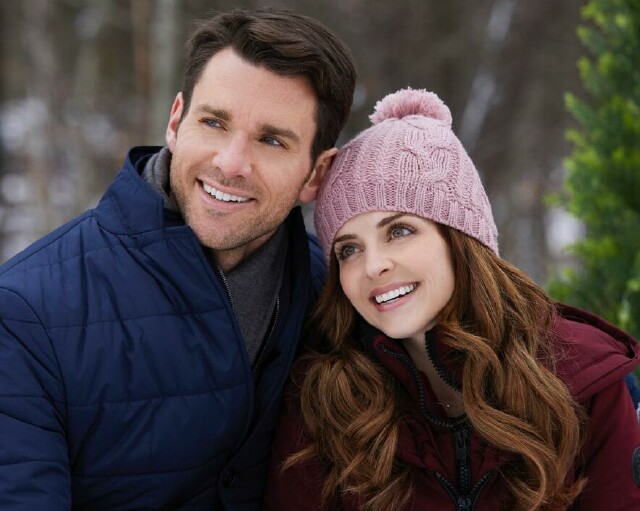 Since joining the Hallmark Channel family in 2017 -- starring in A Dash of Love – Hallmarkie favorite Jen Lilley has racked up a string of hit movies.  She adds a sixth credit to that ever-growing list this weekend with the premiere of Winter Love Story, co-starring Kevin McGarry and Mary-Margaret Humes.  (Lilley and McGarry are pictured above.)  Thanks to Hallmark, Lilley is in the enviable position of being able to do what she loves,  not just acting in projects, but also curating them.  She developed her most recent Christmas movie, Mingle All the Way, serving as an executive producer and also its star.  "I'm really flattered and honored to have my sixth [Hallmark] movie premiering," Lilley said during a recent exclusive interview with MediaVillage.

All of this is a far cry from her 2007 arrival in Los Angeles.  “When my husband and I first moved from Virginia to Los Angeles, after getting married in 2007, it was a dismal time," she recalled.  "We both had great degrees, but the economy crashed, there was a writer's strike, and finding work was hard."

Lilley took work as a non-union background actor to make ends meet.  She worked her way through the trenches, and still thanks her parents for the Costco membership card they gave her before the move.  "We would go to Costco to get the samples because we were so poor that we couldn't afford food," she said.  "On one of those Costco runs we found a 36-pound bag of rice on sale for $5.98.  I bought a giant plastic container to protect it from the roaches we lived with and without exaggeration, all we ate for seven months was this 36-pound bag of rice, eggs and onions -- that was it.  Honestly, it was to the point that if I wasn't earning $60 a day doing background work we would have died."

She survived the rice famine thanks to some lucky breaks, courtesy of people like Clint Eastwood, who moved her from background player to a plum role in The Changeling, opposite Angelina Jolie.  Fast-forward to the present day – past her popular portrayal of Theresa Donovan on Days of Our Lives and earlier Hallmark projects -- and good-natured Lilley can laugh about the days when it felt like she was a contestant on Survivor.  Her tenacity and self-study of the inner-workings of the business saw her succeed.  It’s surprising, given her tendency to exude confidence, that she is still nervous at heart.  It's a trait that helped her identify with Cassie Winslet, her character in Winter Love Story.  "I can be nervous," Lilley confided.  "[Like Cassie] I know what I'm good at, and I know what I'm terrible at.  It's something I'm vigilantly working on, so I related to her." 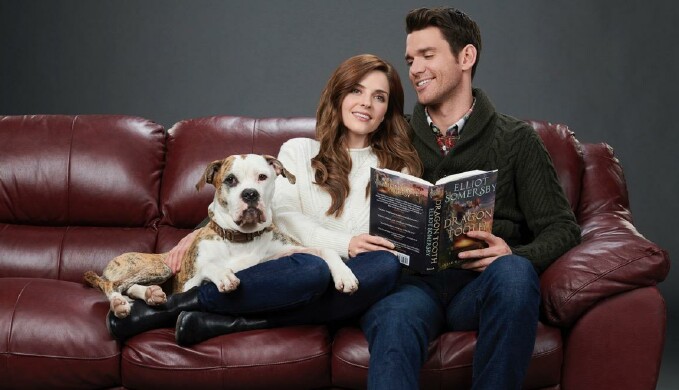 Cassie is a novelist who shares her experiences with a messy break up in her debut book.  However, her low public profile has her publicity team nervous and thinking it wise she pair up with an established author to embark on a duel book tour.  Enter Elliot Somersby (McGarry), a "nerdy dragon-book writer" currently riding a wave of success after the release of his second fantasy novel in a trilogy.  After an ambush meeting with her publishers, Cassie reluctantly embarks on a road trip/book tour with him.  Stuck on the road together, the two eventually open up to each other.  Seasoned writer Elliot becomes Cassie's support system and she realizes she may have erroneously judged him and his book, too.

"One of the huge draws for me with this movie was that the way Cassie and Elliot got to know each other was a little different," Lilley said.  "I always feel fortunate in general with the movies Hallmark [brings to] me, as I find them to be a little quirkier than usual.  I also really appreciated the witty banter between the two.  It was fun, and maybe a little more sharp-witted than some of the things I've seen in the past.  I found their whole journey uplifting."

Another huge draw for Lilley was co-starring with Mary-Margaret Humes (Dawson's Creek), who plays her mother, a successful author with whom she lives, forever in her formidable shadow.  "My first movie in Los Angeles was with her," she shared.  "I was a huge fan of Dawson's Creek, but I was actually too young to be watching it.  When my parents found out I was doing so, I was unable to keep following it!  But I was familiar with Mary-Margaret's body of work. She got the freak-out from me 11 years ago the first we time worked together.

"I loved the relationship and Mary-Margaret is extremely talented," she added. "It wasn't scripted, but she came off as this Princeton professor who was intimidating but loving.  [Cassie] was constantly comparing herself to her mother and I loved the arc she had in realizing that she's her own person and it's okay for her to write, even if she's compared to her mother.  It doesn't impact her success because you're always going to have critics.  But if you don't do what you love, then you're robbing yourself of that passion."

Lilley's other passion is singing, and she’s looking forward to the release of her second album by the end of February.  Then she's headed to work on a canine-centric movie, hopefully for Hallmark.  But it's formally finalizing the adoption of her eldest foster-child to which she is most looking forward.  "I'm excited about signing the adoption papers," she shared in closing.  "We're awaiting the official adoption court day where you say, ‘I do.’  Kind of like you're getting married.  So, legally we are now engaged.  We've signed the papers and have given him a ring.  It's been a long road and I intend to throw him the biggest party ever.  It will put all other parties to shame!"