In Praise of "Portlandia" During Its Penultimate Season 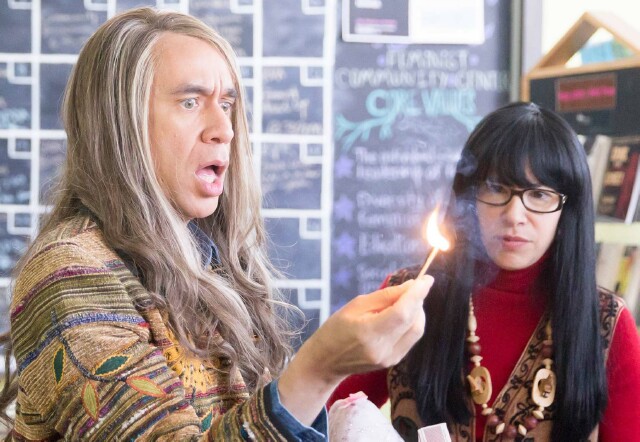 Portlandia, the IFC comedy sketch show starring genius character actors Fred Armisen (of IFC’s Documentary Now! and NBC’s Saturday Night Live and Late Night with Seth Meyers) and Carrie Brownstein (of rock band Sleater Kinneyand Amazon’s Transparent) has recently been greenlit for its eighth and final season. At the moment I’m writing this, the show is about halfway through its seventh season, and unlike most series at this stage of the game, Portlandiahasn’t lost a step.

Most shows that make it this long are usually doing themselves a disservice just by continuing to exist. More often than not, they’ve been around long enough to stop being all the things their fans originally loved about them.  Shows like Friends, Seinfeldand Sons of Anarchy have successfully navigated these waters by choosing in advance the exact time to gracefully bow out, while so many others suffered the all-too-familiar fate that comes with over-staying one’s welcome and being on just long enough to sputter to an anti-climactic end.  For sketch shows, the sweet spot tends to be about five seasons (see: Key and Peele, The Whitest Kids You Know), so for Portlandia to designate its eighth season as its last, and for that designation to feel premature, is a testament to how fresh and funny IFC’s heavy hitter has kept things over the years.

Right from the start Armisen and Brownstein (pictured at top) and fellow creator/director Jonathan Krisel nailed their slice-of-life style vignettes, bringing the hipster inhabitants of Portland, Oregon to life through a plethora of characters that are equal parts unique and entertaining, and they do so with what seems to be little to no effort. Before any semblance of monotony can even begin to occur, a new element is added -- a celebrity guest star, for instance (Kumail Nanjiani, Chloe Sevigny, Jeff Goldblum and Claire Danes, to name only a few) -- just in time to stir the pot. And if things go a little too far off the reservation, there’s also a full roster of recurring favorites to swing right back to.  It’s a masterful dance, maintaining that balance, but it’s a skill that’s allowed the trio to slide right through six and a half seasons to date and remain virtually unscathed by the usual wear and tear that this type of longevity normally implies.

Seemingly random at first, the show does have a light thread of continuity flowing throughout.  It gives Fred and Carrie the ability to flesh out this world through new (and well-known) characters in every episode, but also to follow a loose story arc based around the fictional versions of themselves who are roommates, residents of Portland, and best friends with the town’s fictional mayor (Kyle MacLachlan).

Although their friendship is as platonic as they come, the semi-husband-and-wife vibe they give off is both referenced and played off of plenty of times through situations like their same room/separate twin bed sleeping situation (a la I Love Lucy),the episode where they have sex, and Fred’s apparent habit of referring to Carrie as his wife (as seen in a recent episode). Either way, they play off of each other as easily as Laurel and Hardy, and that kind of chemistry is everything.

My only question is where will IFC’s attention go next? Their marquee programs (Maron, Comedy Bang Bang and now Portlandia) have all either ended or are ending. Maron saw a four-season run, and Comedy Bang Bang made it as a far as five seasons, which are stories of success and not failure, but with Portlandia heading in the same direction by next year’s end it makes me wonder how the network plans on filling the gap.

The aforementioned shows will undoubtedly live on via streaming services, and Comedy Bang Bangis well past the point of syndication, so we will continue to see them, but much like HBO’s teeing up of Westworld (in light of the looming post-Game of Thrones world) so does IFC need another bullet in its chamber.  Top contenders at the moment are the upcoming Brockmire (a baseball-centric comedy starring Hank Azaria and Amanda Peet) and the horror-comedy Stan Against Evil, which after a successful first season was recently renewed for a second.

Portlandiais a perfect example of the kind of irreverent, outside-of-the-box comedy that IFC drives and thrives at.  As long they keep it weird, they’ll keep me watching.

Portlandia is telecast on IFC Thursdays at 10 p.m. ET.