Insights on the Infinite Dial Report 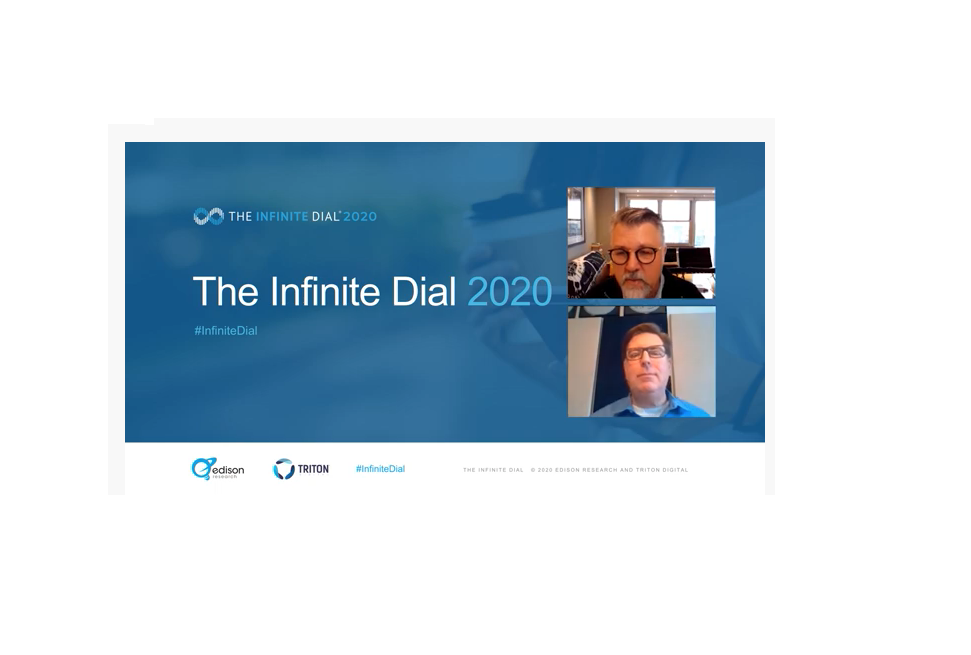 The official release of the annual Infinite Dial report, as presented by Tom Webster from Edison Research and John Rosso, president of market development for Triton Digital, has become not just a harbinger of spring, but also an anticipated reveal party. Will more people have become familiar with the term podcasting? Will any other gamer demos outside of men 12-24 show increases? (Spoiler alert for the 2020 report: yes and yes.) But, while the usually on-point trends projected for this year wouldn't have been questioned in, say, February, March has brought enough ill winds that when the 2021 version of the report is released next spring, a look back may be surprising.

Despite the required shift from streaming the presentation live from New York City's Greene Space stage to streaming via webcast, Webster and Rosso did their best to maximize the small screen and did not disappoint. Their genuine friendship and banter (even beyond the requisite question in these days of mid-shot videos: "Are you wearing pants, John?") have always added color to the research reporting. And this year's somber attendees, no doubt, appreciated it. I asked a couple of the webinar attendees, including Westwood One's chief research officer, Pierre Bouvard, and WarnerMedia Podcast Network's Tyler Moody, for their more serious takeaways.

Infinite Dial 2020 is divided by topic, including media and tech, social media, in-car media, audio, and podcasting. Overall, the survey did not hold many shockers: the use of popular social media channels, including Facebook and Pinterest, has stayed steady, with TikTok showing the biggest uptick; phone/watch purchases have leveled off; tablets have slightly declined; and Amazon Alexa devices are still the clear leader in smart speakers. What is interesting, however, is that while U.S. smart speaker ownership is at 27 percent, about 62 percent of the population actively uses voice assistants — which could be Alexa, her sister Siri, or an IoT refrigerator. 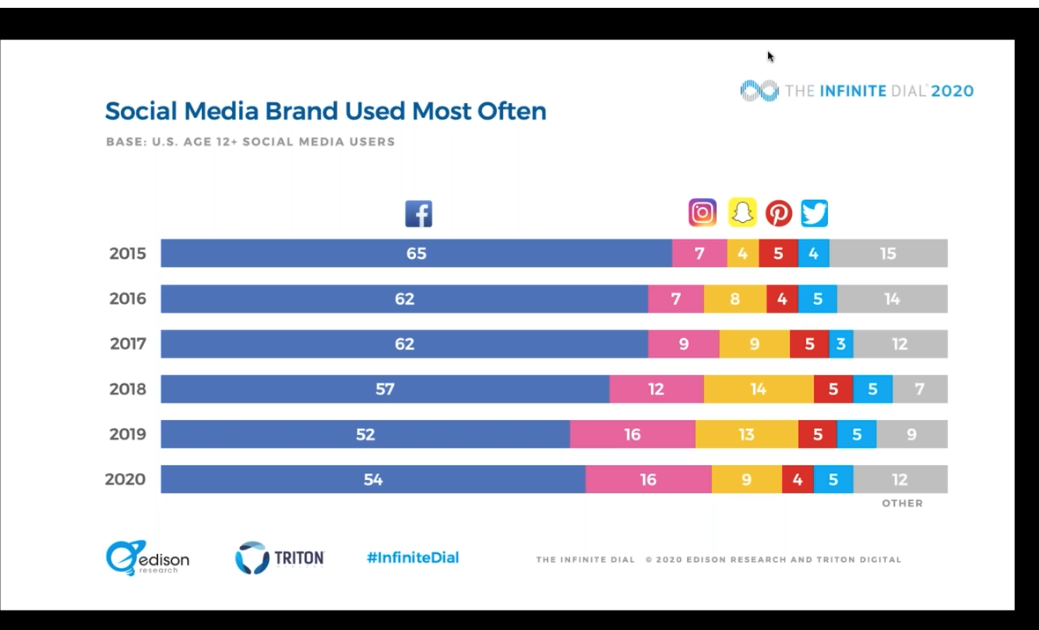 Speaking of voice, Pandora retains its lead for awareness and monthly usage by 35- to 54-year-olds, but Spotify led the pack for monthly users among the 12-34 set. The influence of smart speaker ownership also impacted a big jump in Amazon Music consumption, if still just 8 percent of the pie overall.

Bouvard was a fan of the fact that smart speakers are also bringing radio usage back into the home. "The Edison data reveals [that] 68 percent of homes have a radio, and an additional 8 percent … have smart speakers but no radio."

While in-car media was a boon for online radio — and podcasting — it will be interesting to see how homebound Americans shift media habits. Webster personally predicted that this could actually have a negative effect on podcast consumption, as our opportunities to, say, listen while driving or commuting are replaced with time entertaining or homeschooling children or being engrossed with TV news.

Webster teed up the section on podcasting with an admittedly recycled but apropos joke: "If you'd like to listen to this webinar as a podcast, just close your eyes." There were, if not eye-openers, some pleasant surprises uncovered in that realm. For Bouvard, it was "how fast the growth of female audiences to podcasting has expanded. Female audience growth is triple [that] of men." He cited the finding that monthly female podcast audiences have risen dramatically year-over-year (YoY), from 29 percent to 36 percent, a 24 percent increase. Male monthly podcast audiences have grown a modest 8 percent YoY, from 36 percent to 39 percent.

In noting that podcasting's jump in monthly listeners (from 32 percent to 37 percent) moves it past the 100 million mark, Webster says it's "certainly a medium now for advertisers to take seriously." Moody, of course, as vice president and general manager for WarnerMedia Podcast Network, has always been bullish on that, but soberly adds that the average time spent listening has leveled off — still at approximately 6.5 hours. "So, it's on everyone in the industry to continue to bring more new people to podcasting," Moody says. "There's still plenty of room for growth; there's a huge opportunity with listeners in cars that will likely require both tech improvements for frictionless access to podcasts [and] shifts in content strategy." 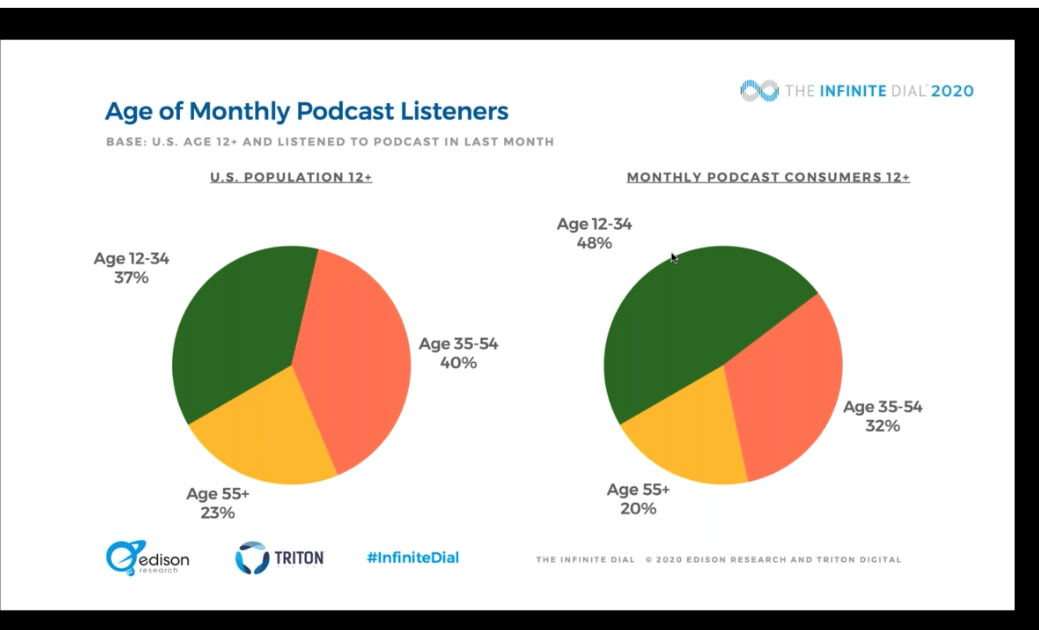 In terms of monetizing podcasts, Moody believes that just as listenership is growing, "new advertisers and categories will continue to learn the podcast space and find value with its unmatched audience engagement."

Bouvard added his own empirical back-up to that belief: "We just fielded a study of advertisers that said the tipping for brands is a 44 percent monthly reach. With the [now 104 million monthly listeners] this year, we are getting really close to that tipping point for brands."

Comparing the profiles of monthly podcast listeners to the U.S. population, listeners still skew younger and slightly (if less than before) male, and are still less diverse. However, Webster notes that next up from Edison will be the results of a study they are currently fielding among Hispanic/Latinx listeners.