Is Everything Gonna Be Okay? Ask Josh Thomas!

By Steve Gidlow March 12, 2020 Behind the Scenes in Hollywood Archives 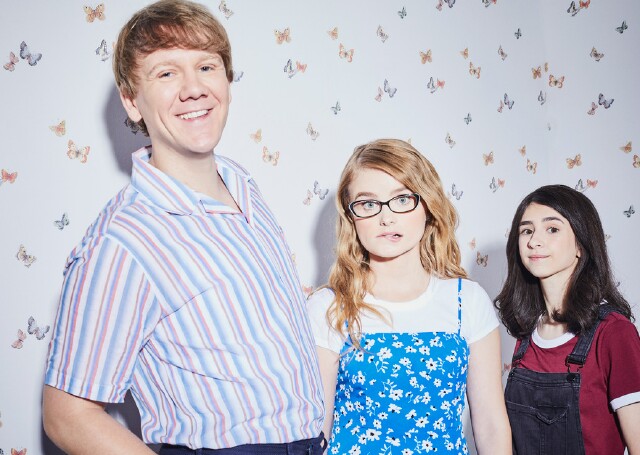 Freeform’s ground-breaking series Everything’s Gonna Be Okay concludes its initial ten-episode run this week.  The series, created, starring and written by Australian actor Josh Thomas,  covered much uncharted territory for the network, as Nicholas (Thomas, pictured top left), following the death of his father, was left to raise his two half-sisters, Genevieve (Maeve Press, top right) and Matilda (Kayla Cromer, middle), while trying to navigate commitment issues in a new relationship with his boyfriend Alex (Adam Faison).  Like Thomas’ quirky cult classic Please Like Me (now streaming on Hulu), the series has dealt head-on with some highly sensitive issues as filtered through his unique comic perspective.  Nothing has been off limits, including grief and loss, the struggle of becoming a new parent to teenagers, and the burgeoning sexual awakening of a teenaged girl with autism, unsure if she’s ready to enter college life.

Thomas says Freeform provided the perfect incubator for his series; one he knew would be edgy.  “They were actually interested in extending Please Like Me, but it didn’t work out,” he told MediaVillage exclusively during a recent interview.  “I was like, ‘If you are happy airing that, then you will be happy with what we want to do down the track.’  I know the fans would have been happy with more Please Like Me, but it just wasn’t happening, and I really didn’t want to.  Contractually it would have been impossible.

“We would have continued doing it in Australia,” he continued.  “But things never got too far and honestly, I was fine to see Please Like Me finish.  The premise was very similar to the original Party of Five– so it was sort of Party of Three.  I was excited to introduce new characters and tackle things like high school.  But we also wanted it to be heartwarming, funny and dramatic.  The fact they were excited to air [Please Like Me] did build a lot of trust for me, in that they were willing to do all this stuff and push the envelope.”

Over the past nine episodes, Everything’s Gonna Be Okay didn’t just push the envelope; it sealed, stamped and mailed it.  “The most controversial moment in the season, one that hasn’t been talked about, was when we used the word ‘faggot’ in episode two,” Thomas recalled.  “It’s probably the first time Disney has put that word on air.  There was a little back and forth on that, but I’m gay, so I was saying, ‘This is okay.  It’s a gay writer writing for a gay character.’  They said they would run it by GLAAD.  I thought that was funny.  I was like, ‘I am as gay as anyone you are going to ask at GLAAD.’  So that was a conversation.  They just wanted to make sure that we weren’t being insensitive.”

According to Thomas, the series’ two-episode “consent arc” featuring 18-year-old Matilda, who is on the autism spectrum, losing her virginity at a party -- one that raised the issue of consent versus innocence being taken advantage of -- was particularly tricky.  “There was a lot of conversation about the minutiae of how people were being represented with that,” he shared.  “So, there were collaborators on it and a lot of conversations regarding our point of view and making sure it was sound and moderating it.  I don’t think they ever said a flat-out ‘no’ to anything we wanted to do.”  (Like the character she plays, Kayla Cromer, the actress who plays Matilda, is on the autisim spectrum.)

As the series’ creator, star and showrunner, Thomas felt right at home on his first U.S. production.  “In Australia that’s normal,” he laughed.  “So, I’m used to doing everything at the same time.  We write all the scripts before shooting, which isn’t the thing to do in America.  I didn’t know that.  The scheduling of everything was interesting.  In Australia, you don’t have a lot of money, so you have to hire someone who can do it all.  Here, there are a lot more people involved.”

Thomas hopes there will be a second season of Everything’s Gonna Be Okay, and he said he would be pleased to call Hollywood his home for a while.  “I do miss Australia but I’m here for a while,” he smiled.  “I flew my 12-year-old dog here, and he’s too old to fly home, so that’s my timeline.  Hollywood is really suiting him.  He’s managed to slim down, and he loves the sun.”

The season one finale of Everything’s Gonna Be Okay will be telecast Thursday at 8:30 p.m. on Freeform.