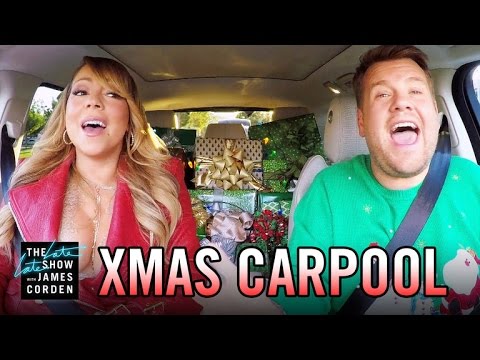 It’s only a segment of a late night talk show, but thanks to YouTube and the whole viral video thing – not to mention ratings hungry “news” and entertainment programs and content-starved celebrity driven Web sites of all kinds – the Carpool Karaoke segments on CBS’ Late Late Show with James Corden have become a formidable franchise of their own. They are the most reliably engaging part of Corden’s show, in much the same way that the Tea Time Movie, Karnak the Magnificent and Aunt Blabby segments always delivered on NBC’s The Tonight Show Starring Johnny Carson. Or to look at it in streaming terms, Karaoke is to Late Late Show what Comedians in Cars Getting Coffee is to Crackle – its best feature. What is it about famous people letting loose in automobiles that enthralls us so?

This year the biggest names in music, from Justin Bieber to Carrie Underwood, have tooled around New York City, Los Angeles and London with Corden and his crew. He has outdone himself more times than I can remember, but never so memorably as with Madonna just a couple of weeks ago. Madonna hasn’t opened up on camera like that in years, and it was wonderful watching her have so much relaxed fun as Corden drove her around Manhattan, revealing details about her personal life (including her relationship with Michael Jackson back in 1991) and performing many of her greatest hits. (Watch it below.)

More recently we had a Karaoke extravaganza, which started out modestly enough with Mariah Carey singing her holiday treasure “All I Want for Christmas Is You,” and then exploded into a celebration of the season with cuts to Elton John, Adele, Lady Gaga, Chris Martin, Demi Lovato, Nick Jonas, Selena Gomez, Gwen Stefani and the Red Hot Chili Peppers also being driven around singing that song with their host. (Watch it up top.)

Unfortunately, the non-Karaoke content on Corden’s show doesn’t seem to generate anywhere near the buzz of the franchises hosted by his fellow late-night funnymen – especially The Tonight Show Starring Jimmy Fallon,ABC’sJimmy Kimmel Live and NBC’s Late Night with Seth Meyers. However – and this is important – Late Late Show is far more entertaining and satisfying than The Late Show with Stephen Colbert, one of the great TV disappointments of modern times.  There is much more potential for late night greatness from Corden than Colbert, I’m afraid, and CBS really ought to consider moving the former up and maybe sending the latter back to cable (maybe on Showtime?) where once he thrived. Then the network ought to insist that Corden get his guests out earlier, keep them in place longer and give us the same sort of great group conversation that has for many years made the BBC’s The Graham Norton Show the best and most distinctive celebrity talk show on television. (It’s seen here on BBC America, of course.)

To end on a positive note, Corden proved to be the perfect host for the 70th Annual Tony Awards on Sunday, June 12, mere hours after the massacre at the Pulse nightclub in Orlando, the largest mass murder in this country since 9/11. Millions of people all over the world were reeling from the horror of it; fewer were wondering how a celebration of the arts could go on. (Arguably, there was greater interest in the Tonys this year than usual because of all the nominations that Hamilton had received.) Corden opened the show with a thoughtful introduction, paying respect to the victims and their loved ones, soothing the rest of us and setting the stage for the first-class presentation to come.

It had been only four years since Corden was honored with a Tony Award for Best Actor in a Play for his performance in the comedy One Man, Two Guvnors.  Pay attention, CBS – New York City seems to bring out the best in this very talented gentleman.