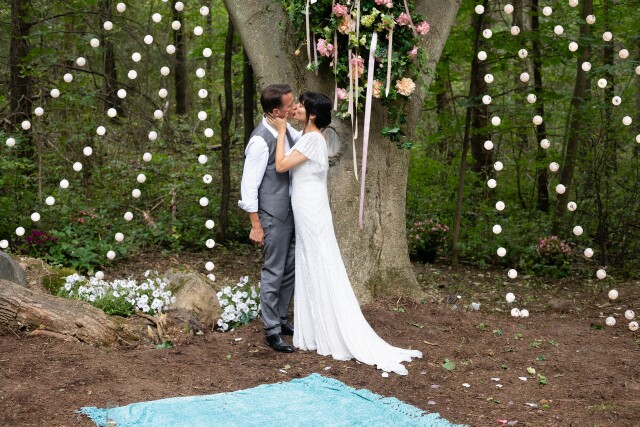 Actor James Denton is no stranger to successful runs on series television.  He spent 18 years working in Hollywood, with 16 of those a series regular on shows like NBC’s The Pretender and ABC’s Desperate Housewives.  Success is something Denton parlayed when he transitioned to Hallmark Channel, joining the current No. 1-rated show on ad-supported basic cable, Good Witch, co-starring Catherine Bell.  (The two are pictured at top.)  You might think Denton has a good eye when it comes to selecting projects, but he’ll tell you otherwise.

“I don't know if you could say that,” he laughed when MediaVillage spoke with him exclusively about his latest series. “I specifically chose Good Witch because I had faith in Catherine and the [previous] success of the movie franchise. Desperate Housewives, I almost didn't take because at the time ABC was at the very bottom of the ratings and running Who Wants to Be A Millionaire four nights a week. There were no scripted dramas and after we came along so did Grey's Anatomy and Lost, but at the time I'd done two series for ABC, Philly with Kim Delaney and Threat Matrix, which I led, that only lasted one season each. When Housewives came up, I thought it sounded like reality television and almost didn't take it. That's why I can't say my eye is really that good. 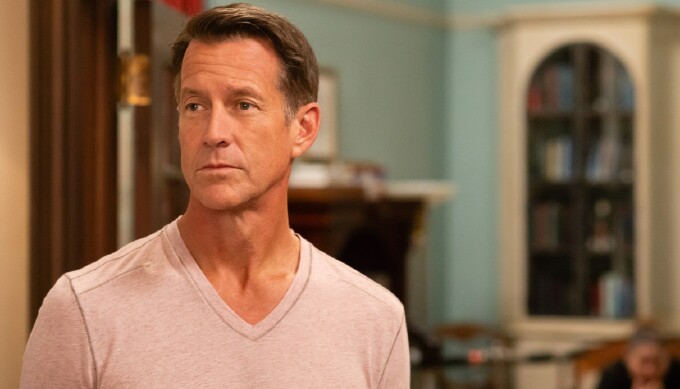 "I knew Good Witch would probably do well because the movies were so popular," he continued. “And people love Catherine Bell, so Good Witch was established, otherwise you kind of assume with a new series that it's probably going to get canceled as most of them do. I felt pretty confident that viewers would respond. Did I have any idea it would be the No. 1 show on the network? No, but it's not a shock."

With viewers firmly invested in the Cassie (Bell) and Sam (Denton) relationship, going into the fifth season viewers saw a major twist in the storyline. Already engaged, the leads finally tied the knot in the season's two-part season opener, ending any question of “will they, or won’t they?” Denton was delighted with the placement of the wedding.  "I liked that it wasn't [the season] finale," he said. But cementing the show’s central romantic relationship was a concern. "It always changes the dynamic, and it remains to be seen how it will, or won't," he shared. “Our second week we had really good numbers, so the viewers haven’t left us yet.

"On Desperate Housewives, [changing the narrative] had a very detrimental effect," he recalled.  "That five-year reset happened, and they had Mike (Denton) and Susan (Teri Hatcher) get divorced during that time, then get remarried, so it is a tricky thing. Luckily, Good Witch isn't driven by romance and Cassie has so much going on, as does everyone else on the show storyline-wise. It's not like Cheers with Sam and Diane, who were kind of driving the ship, or Moonlighting. Still, it is a concern when you put two people together, especially after keeping us apart for four years. You can't help but wonder how the audience will react.”

Thankfully for Denton, and Bell who serves as an executive producer on the show, Goodies (as fans of the show are known) are still tuning into to the fictitious town of Middleton in droves.  “It seems everything on Hallmark is doing well," Denton declared.  "The movies are doing better than ever; When Calls the Heart's numbers were up, so we can't complain. We basically have over 3 1/2 million unduplicated viewers, which is crazy for basic cable."

According to Denton, "It's a fun time to be at Hallmark." Viewer retention is at an all-time high, something Denton attributes to today's political climate. "People want something positive,” he asserted. “I think they're tired of watching people being awful to each other and they can turn on Hallmark Channel and see people treating each other well and have a happy ending. I really believe that has a lot to do with it."

These days Denton is also thankful to Hallmark Channel for his own happy ending. He relocated to the mid-west a few years ago, ready to semi-retire. However, that changed after hosting the network’s Hero Dog Awards in 2014, something he continues to do. “[Crown Media Family Networks President and CEO] Bill Abbott came to me with Good Witch after I'd hosted the awards," he recalled. “Living here and traveling to Toronto to shoot the series is fantastic, so I don't do a lot other than Hallmark now. I have two teenage kids and [the show] allows me to be here. We go back to work in August and I get to come home every weekend. I do local plays, the 12 episodes of Good Witch (including the two-hour Halloween movie) and another Hallmark movie, so that's pretty much my year.”

He still gets back to Los Angeles from time to time, occasionally performing with the all-star Band From TV he formed some years ago; one that currently includes Adrian Pasdar and The Walking Dead's Sarah Wayne Callies (to name a few) and has raised over $4 million dollars for charity to date.  He also has another Hallmark movie in the works, one that will exercise his musical talents, which he'll executive produce.

"Right now, we are very blessed, and I can't complain," he shared in closing. "There are times I miss L.A. and I do miss the commute to Universal Studios because as an actor having the same job for eight years is rare. Now I'm flying two hours for work, but there are perks -- I don't have to pay for gas and I'm getting frequent flyer miles."