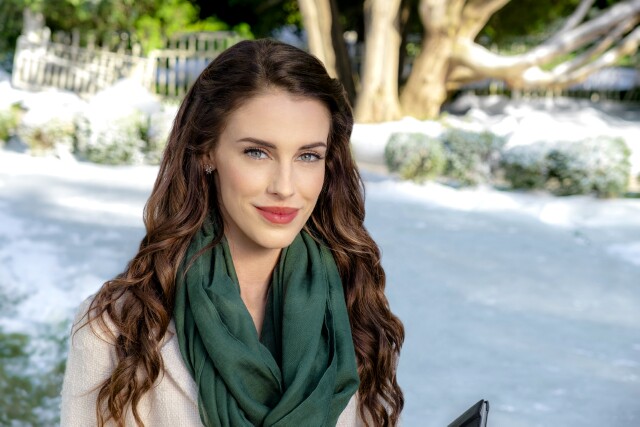 Hallmark Channel kicks off its annual Countdown to Christmas two-month programming spectacular Saturday night with Christmas at Pemberley Manor, a fresh take on the classic tale Pride and Prejudice.  There might be momentary confusion for dedicated Hallmarkies as a new Elizabeth and Mr. Darcy make their debut on the channel, but Jessica Lowndes, who portrays Elizabeth Bennett, wants it known that only the names remain similar to the characters featured in Hallmark's hugely popular movie Unleashing Mr. Darcy and its sequel, Marrying Mr. Darcy, which starred Cindy Busby and Ryan Paevey.  "I don't think people will get confused," she explained during an exclusive interview with MediaVillage.  "They are different characters in a standalone story with a different take and entirely different premise.

"It's a formula that really works and I can't get enough of that,” she continued. "My character is a party planner working for the biggest party planner in New York City, who’s given the job to go to Connecticut and help plan a Christmas festival.  It's my first time taking the lead on an event like this and that's where I meet Mr. Darcy.  He’s super-high-profile, mysterious and brooding, and has lost his Christmas spirit."

With Elizabeth there to spread the spirit of Christmas, she encounters downer Darcy, played by Michael Rady, who's in town to handle the sale of Pemberley Manor, one of the area’s historic landmarks, to developers.  When an unforeseen incident means switching the festival's venue, one last hurrah at Pemberley seems a perfect choice – as long as Christmas curmudgeon Mr. Darcy agrees.

For Lowndes, who starred in The CW's reboot of 90210, embarking on her fifth Hallmark project (and fourth Christmas movie) has become an annual thrill.  "I got my first offer to do Merry Matrimony four years ago," she shared.  "It was one of the best filming experiences of my life because you can't not smile and have a good time doing these films.  I love working with good people, and I've come out of all these movies with friends for life.  Every year I so look forward to doing another one." 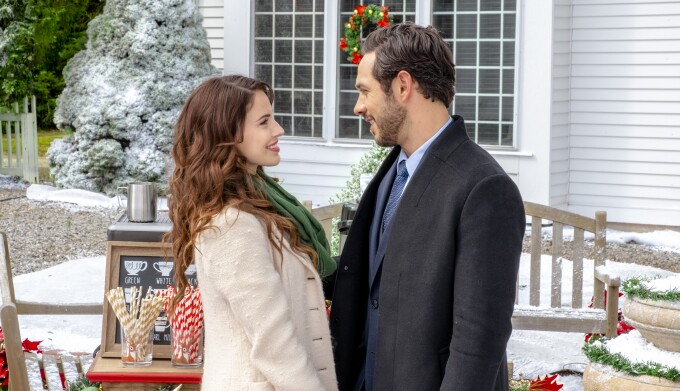 Being a part of The CW's 90210/Melrose Place experience a few years back was also exciting.  "I would see Michael (who played budding director Jonah Miller on Melrose) at events and at one point I think we shot an episode on their soundstage," she recalled.  "But we never formally met, so this was the first time!  I do love him.  He’s such a lovely person and a great actor.”  (Rady is pictured above, right, opposite Lowndes.)

There were abundant bonuses for the actress while she worked on Pemberley.  "I became such good friends with [my co-stars]," she said.  "I think two minutes after meeting Cole [Gleason], who plays my friend George, and Maddie McCormick, who plays Jane, we decided to go on a road trip to Boston, as we actually shot in Connecticut.  I got tickets to Fenway Park and we saw a game, so that was the first bonding trip.  I would highly recommend anyone doing a Hallmark movie to take a road trip together."

Another bonus was reteaming with her former 90210 co-star Elaine Hendrix. "Elaine played my 90210 character's publicist," she said.  "She plays my boss Caroline in this movie.  She invited the whole cast to come stay at her place in Brooklyn.  So, the weekend after the first road trip, we all got on a train and headed to New York.  We all just really jelled and it was this tightknit family.  That was so nice."

But the icing on the Christmas cookie was playing a character she describes as being much closer to her real-life persona.  "I'm a very happy person by nature and wake up singing every morning, happy that the sun is up and so am I," she smiled.  "Usually, I'm playing a damsel in distress and in a lot of the films I've done, and in 90210, I'm someone going through a lot.  I've played a lot of psychos and drug addicts, so in this one I felt like I just got to be myself.

"It felt great to bring my natural energy to the part," she added.  "I love Christmas, as does the character, and in the last three Hallmark Christmas movies I've done, my characters have been heartbroken or sworn off Christmas or sworn off men.  My co-stars kept mentioning my happy little ‘shrug/clap of joy,’ which is something I do all the time, and I get to do it throughout this movie!”

The biggest thrill for the accomplished singer and philanthropist (who designs T-shirts to support her MS Foundation -- Love Fights) was singing in the film.  "I was surprised that happened," she admitted.  "They'd written a singing scene after they found out I could sing and asked which Christmas Carol I'd like to perform.  ‘Oh, Holy Night’ is one of my favorites and something I'd released a few years ago, with 100% of proceeds going to the MS Foundation, [a disease] which my mom suffers from.  It's something so close to my heart, so I loved being able to include another of my passions."

Christmas at Pemberley Manorwill be telecast Saturday at 8 p.m. on Hallmark Channel.