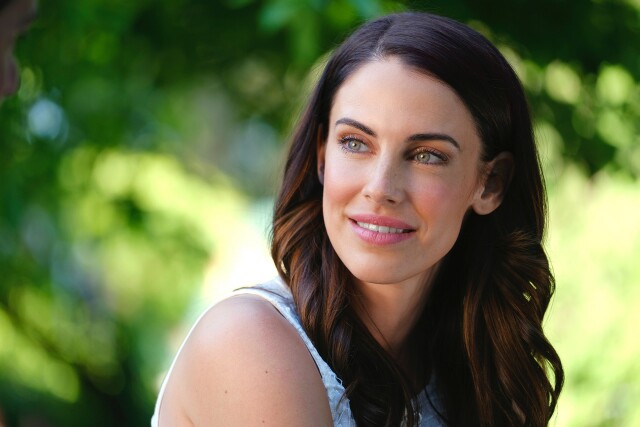 Jessica Lowndes is no stranger to Hallmark Channel or its companion network Hallmark Movies & Mysteries, racking up five films between the two since joining the Crown Media Family in 2016.  But the multi-talented entertainer entered new territory for Over the Moon in Love, her latest Hallmark Channel project, serving as the star, the screenwriter, an executive producer and music contributor, along with pretty much anything else you could think of concerning a production.  For the delightful 30-year-old, the movie brings to fruition something that she’s been preparing for since childhood.  “I've been writing my whole life,” she enthusiastically shared when MediaVillage sat down for an exclusive chat about the project.  “My introduction to that was at age 10.  I had a schoolteacher who had a currency in his class, kind of like Monopoly money, and he'd give everyone a classroom job and pay you in that currency.  He’d hold auctions and you could buy things, only he never knew what to do with me.  So, he made me the class playwright.  Every week he’d give me a lesson that he was teaching, and I would write a play, star in it, direct it and cast it around that lesson -- it was amazing.  I saw him a few years ago and he printed off those plays and gave them back to me!

“I've always loved writing,” Lowndes continued.  “When I moved to Los Angeles at 17, I was writing a screenplay, but I psyched myself out and decided to focus on acting and not spread myself too thin.  In the last couple of years, I got inspired and restarted, so after auditions or whatever, I'd go home and write.  It has now turned into me writing every day from 9 till 5 and I love it.  It makes me so happy.”

The fact Over the Moon in Love was the first screenplay Lowndes sold made the experience “the coolest,” and while the project came with its challenges, some that left her wondering if it might ever see the light of day, she says that the project overall was “the most gratifying experience ever.

“As with anything I've done, I’m used to putting in the hard work and seeing rapid results,” she explained.  “This is a very slow process.  You pour yourself into something and it could be years before you see the finished thing.  Seeing this as a whole … it just couldn't have been better.” 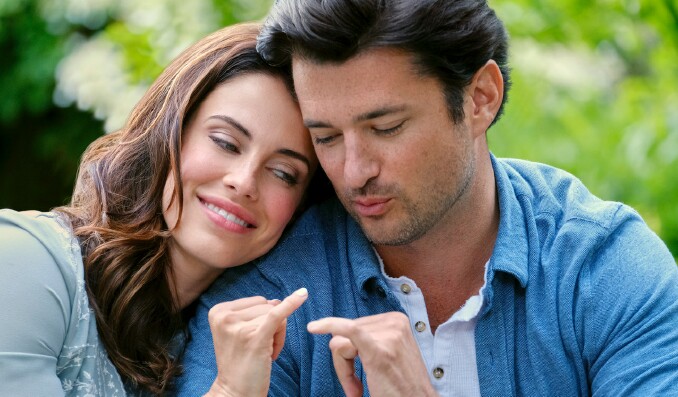 In the film (which is a twist on the classic Edmond Rostand play Cyrano de Bergerac) Lowndes stars as Brooklyn Moore, owner of Over the Moon in Love, a matchmaking agency with a stellar 100% success rate, except when it comes to finding her own perfect match.  Enter high school friend, singer-songwriter Devin Knight (Wes Brown, pictured above with Lowndes), whom she hasn’t seen in years, and with Brooklyn focused on landing her company the cover of Life/Style Magazine, she fails to see that love could be right under her nose.  Blinded by ambition, Brooklyn sets about to pair Devin and the magazine’s editor Stephanie by feeding her intel on Devin and guiding the course of their conversation.  But when the ruse begins working, Brooklyn reconsiders her feelings for Devin, and with more than just a cover story at stake, she is faced with the difficult decision to come clean and possibly lose everything.

For Lowndes, having Brown join her on the project only further fulfilled a dream, and the fact that he was already a member of the Hallmark family made it easier.  “I was so happy to be working with Wes,” she smiled.  “I’d worked with him on 90210 and he’s a dear friend of mine.  In fact, while I was writing this, I ran into him at an event and mentioned I was writing it and that he was the man I wanted for it.  He asked to read it, only it wasn't finished, but I knew it would get made!  I was putting it out there as I really needed it to be made.”

The fact both leads are accomplished musicians helped cement the all-important musical element.  “[Wes] is so talented and also a wonderful singer,” Lowndes said.  “I wrote the songs in it with a Canadian producer named Evan White, and Wes added a couple of guitar riffs in some scenes.  There’s one song I wrote the morning of my grandpa's funeral, a few years ago.  I was going through some tough times, so I sat at the piano and wrote I Can See in the Dark, about not giving up or losing sight.  I gave it to Wes, and he loved it.  Having it in the movie makes it even more special for so many personal reasons.”  (Songs from the movie will be available October 5 on iTunes.)

With her first fully helmed Hallmark project in the can, Lowndes is hard at work again on her laptop and wants to give credit to Hallmark for making her idea a reality.  “I’m so grateful,” she shared.  “Hallmark was my first home and believed in me enough that they would do this.  It's incredible to have their support.  It makes me so proud.”  She also has a message to anyone who has ever dreamed big.  “I'm a big believer in putting things out there, and not to give up or ever take no for an answer.  Where there's a will, there's a way, and I was determined to make this.  I'm so proud of it and hope it's the first of many.”

Over the Moon in Lovewill be telecast Saturday, October 5, at 9 p.m. on Hallmark Channel as part of its annual Fall Harvest programming event.