Jill Wagner on the Challenges of Filming Hallmark's "Pearl in Paradise" 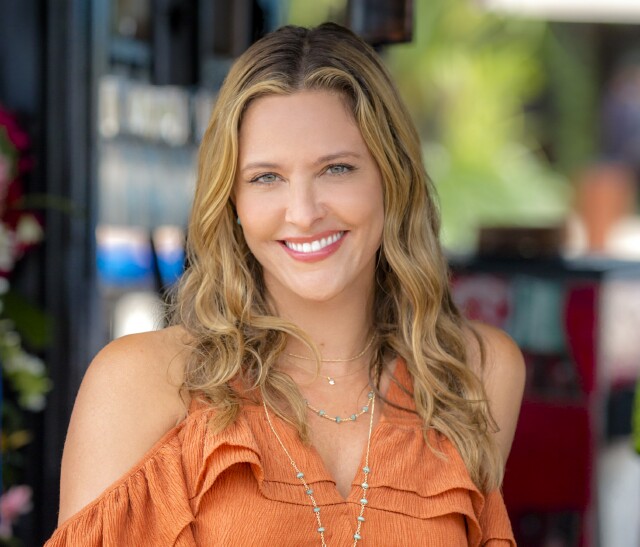 Actress and TV personality Jill Wagner is no stranger to Hallmark Channel.  Her association with the network began in 2015 with Autumn Dreams and since that time she has become a beloved regular in the growing ranks of Hallmark talent.  With the premiere this weekend of Pearl in Paradise, Wagner notches her fifth Hallmark project -- and the former co-star of MTV's Teen Wolf and host of ABC’s Wipeout (for seven seasons) still thanks her grandmother for the opportunity.  “I originally got involved with [Hallmark] because I asked my grandmother what she wanted me to do that I hadn't yet done in my career,” Wagner told MediaVillage in an exclusive interview.  “She said, ‘Hallmark movies.’  I took that to heart, called my manager and said, ‘Can we get a Hallmark movie going?’  Grandma wants a Hallmark movie; she gets one.

“He sent me two scripts,” she continued.  “I sent them to her and she called to say, ‘I want you to do this one’.  It was Autumn Dreams.  I don't think I'd have ever gotten the chance to be in a Hallmark movie had it not been for her as I never really understood how great they are and what they mean to people.”

In Pearl in Paradise, Wagner plays photographer Alex Anderson who teams with author Colin Page -- played by Kristoffer Polaha -- to search for, and photograph, the elusive blue pearl that he featured in his bestselling novel Pearl in Paradise, set in Fiji.  With a promotion promised if she succeeds, Alex has a lot riding on discovering that pearl.  As the two trek through remote parts of Fiji on their quest, Colin reveals he’s never actually seen the pearl (as stated in the forward of his book) leaving Alex to wonder if she can trust him at all, let alone act on the feelings she’s starting to develop for him.

“Fiji! It's like a character in the movie itself, in fact, possibly the lead character,” Wagner said of the film’s location.  “It's beautiful, breathtaking, magical -- all of the above.”  As lovely as it was, though, filming in some of the island’s most remote regions sometimes proved complicated.  “The first day was our biggest challenge,” she shared.  “We got there and there was a monsoon, with the worst rain in years for pretty much the entire time.  Tents were set up for shelter and we would literally run to them when it started raining.  It would rain for 30 minutes, and then in the seven minutes of sunshine following, we'd run out and hopefully get one full version of a scene.  Then it was back to the tents.

“On top of that, we had to deal with mud; people were falling left and right,” she added.  “But you can't be a diva in that situation, no egos, you have to be a team player.  Put your head down and barrel through it.  It was crazy, but it worked.”

For Wagner, who married former pro hockey player David Lemanowicz last year, heading to Fiji for the movie initially had an added bonus, only her plan didn’t come to fruition.  “I knew one of the producers so I was immediately on board and once I found out it was in Fiji -- that was the cherry on top,” she recalled.  “The only downside was I originally thought my husband could come with me, but unfortunately, he’d booked a work trip to London, Greece and Paris for the same time, which are places I would have loved to have gone to.  We didn't take a honeymoon, so we were kind of hoping it would be a little mini-honeymoon.”

With Wagner solo-honeymooning in Fiji, and her husband doing the same in Europe, she found solace in the fact she’d be with her co-star Polaha, with whom she had once shared a screen romance.  “We’d worked together about 14 years ago on a show called North Shore,” she laughed.  “We shot that in Hawaii for about three months and we played love interests!  I hadn't talked to him in 14 years and then we show up in Fiji.  I told him, ‘We only meet in tropical locations, that's it for us!’  But I got to meet his family, and they are the loveliest [people].”

Wagner said there was a lot to like about the character of Alex.  "I have to commend Hallmark for putting the spotlight on strong female characters,” she said.  “I like that Alex is smart, knows what she wants and is adventurous, as those are also parts of my personality.  I love experiencing new cultures and new things.  That stuff feeds my soul.”

When it comes to career, Wagner considers herself “lucky,” she said.  But of all her roles, she considers herself a Hallmark girl at heart, and the only thing left is to sing and dance.  “I’m producing a movie for Hallmark where I would be a singer,” she revealed.  “It’s the first film I'm producing, so there are a lot of ‘caps’ involved, from producer to writer, to singer -- and most of all my ‘nervous and fearful cap.’  But it's exciting and inspired by my own love story with my husband. So it's definitely going to have a happy ending.  But I will not dance in it!  That’s too scary!”

Pearl in Paradise will be telecast Saturday, August 18 at 9 p.m. on Hallmark Channel as a part of the network’s Summer Nights programming event.