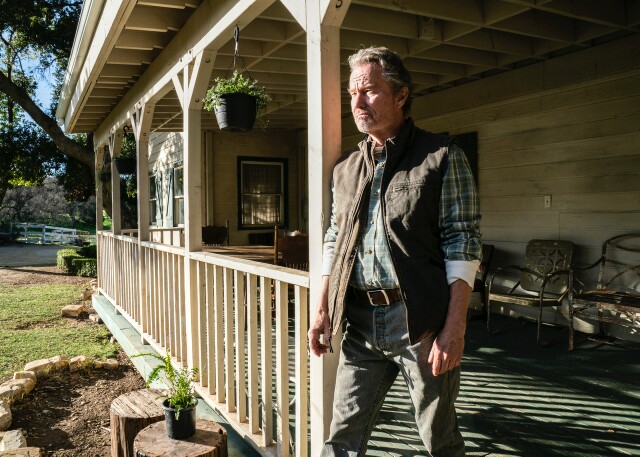 The name John Savage brings a certain amount of prestige and credence to any project he is involved in, and the esteemed actor couldn’t have been prouder to do that for CBS’ SEAL Team.  Savage completes the last of his three-episode arc this week, guest-starring as Emmett Quinn, the estranged father of Sonny Quinn (A.J. Buckley), who after being sidelined from his team for misconduct returned home to rebuild their fractured relationship.  Last week saw that come to head as the father and son endeavored to have a simple meal together, and Sonny attempted to mend fences with the man he felt has pushed him away for most of his life.  During that sequence, viewers discovered it wasn’t just a generational void separating these two, with Sonny’s intense resentment for his father providing deeper insight into his “no-frills” rebellious nature. For Savage, who has long been associated with returned veterans, being able to highlight the reality of war and its long-term consequences was a perfect fit.

“The fact I got to be a part of this storyline was an honor,” he shared in an exclusive interview with MediaVillage.  “Just to be able to show that kind of relationship to younger people.  The story on SEAL Team goes beyond an incredible representation of what’s going on with the soldiers who really serve for us in [another] part of the world.  When they do come home, they are different and changed.

“There are challenges within people that I think the three episodes I was given were good for highlighting that,” he continued.  “When young people come home [from service], sometimes it’s hard to figure out their state of mind.  So, for me, it’s an important reflection of the times.  As with this terrible disease that is affecting the whole world, we all have to [continually] change our perspective on life.  That’s the way it is.”

Savage first received critical acclaim with his break-out, Oscar-nominated role in 1978’s The Deer Hunter and continued receiving accolades with appearances in The Godfather II, Hair and The Onion Field.  He’s amassed over 300 credits and continues to entertain us with riveting performances -- just don’t tell him that’s what he’s been doing.  “The word ‘entertainment’ does make me flinch a little,” he joked.  “But it is exactly that.  Just for maybe an hour, relax and let somebody else do the world, and do life for us, so we can just watch.  Life can be really overwhelming, but the emotion and power in entertainment can be really good for us.”

Before landing the role of Emmett, Savage was aware of SEAL Team but was not an avid watcher.  His TV viewing usually consists of cop, hospital and emergency show re-runs, but a crash-course on the series brought him up to speed.  “I’d been following it, and their incredible interpretation of reality,” he revealed.  “But I [already] knew a lot because of my involvement with people and groups who are returned veterans.  I’ve visited hospitals around the country, and it’s heartbreaking.  I’ve seen people who’ve lost limbs yet are still devoted and committed to the service.  I’ve been with these guys, surrounded by family, and they’ve looked me in the eye, and said, ‘I’m going back.’”

It was an admiration for his TV son (Sonny) that really attracted him.  “I loved the Sonny character and I wanted to adopt him,” he laughed.  “A.J. is a wonderful young man, and it was kind of like dealing with my own son, yet also very different.  Sonny is a man devoted to something he’s very passionate about.  He’s willing to sacrifice for it, and that’s very tough.  Emmett also went through something he was very devoted to and lost his wife.  He threw himself into his immediate concerns -- his farm, his animals and his work.  It’s powerful and amazing stuff.

“And A.J. wasn’t at all star-struck,” he added of his TV son.  “At one point I was talking about something very intricate, my knowledge of the world and things, and he stopped me saying, ‘John, I’m just an actor.’”

Like the rest of the world, Savage is currently self-isolating and adjusting to the current Coronavirus crisis.  He’s thankful for having the technology to reach out to loved ones.  He is meditating and wisely using his time to learn to say ‘Thank you’ in as many languages as possible.  “We are all in this and a simple thank you is all we need,” he shared.  “Thank the people on the front lines in the grocery store.  We fight wars to have what we have.  We continually battle changes every single day.  Just have respect.”

With his storyline on SEAL Team open-ended, he’s also eager to return.  “Are you kidding me?” he exclaimed in closing.  “I’ll never say I’m too busy!  The writers, cast and crew are incredible.  I really want to be a part of this show.  I am grateful I was.”

SEAL Team is telecast Wednesdays at 9 p.m. on CBS.