Jonathan Chase: Hallmark's "How to Train Your Husband" is a Departure 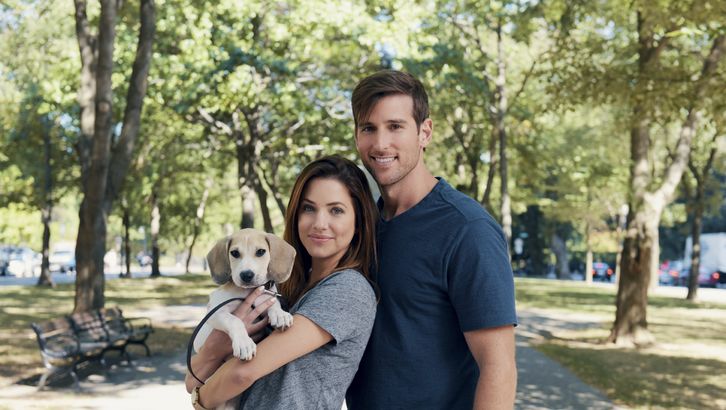 How to Train Your Husband is telecast Saturday, May 16, 9 p.m. on Hallmark Channel. Charismatic actor Jonathan Chase returns to Hallmark Channel this weekend, starring opposite Julie Gonzalo (both pictured at top) in the premiere of How to Train Your Husband. For Chase, the chance to do something dramatic, after working on the Tyler Perry/Oprah Winfrey comedy Love Thy Neighbor for the past few years, was nice. "I was a little nervous about doing a drama and I had to trust our creators and the director," he revealed during an exclusive interview with MediaVillage. "I've done a bunch of stuff for Hallmark in the past, Always and Forever, Strawberry Summer, and was busy with Tyler Perry for a while, so it was a nice surprise to find Hallmark had scheduled [the movie] now. I thought the movie was cute and really sweet. I'm so grateful to be on Hallmark Channel as I love that it's wholesome, always positive, and always tries to uplift. I love that message, and for me, it goes in line with working with Tyler and Oprah for five years, people that are just trying to better others.

"Julie and I had the best time making this," he continued. "And Andre Hall who plays my best friend Aaron, is my best friend. After working together with Tyler Perry for five years in Atlanta he's like my brother. He was actually living with my wife and me in self-quarantine until he could be with his girlfriend. He's family, and we both got cast in [this] film! So we had a great time filming it in Boston."

In the film, which is a pleasant departure for Hallmark Channel, Chase portrays adventure expedition specialist Justin James, whose marriage to Jillian (Gonzalo), a successful author and marriage therapist, is less than harmonious. As their respective careers have flourished, the spark that ignited their relationship has dimmed, and while Jillian is adept at dishing marriage advice, she's not so good at receiving it. It's while trying to figure out the secrets to a successful marriage for her new book, she comes to the realization of just how much she's taken her beau for granted, and to save her marriage, needs to make amends.

The fact viewers get to delve into the world of an existing relationship, rather than seeing a new one form, appealed to Chase. "Hallmark Channel is branching out and [that's] pretty cool," he shared. "I loved that this movie picks up in the middle of a relationship because marriage is complicated. It's portrayed early in the film that Julie's character Jillian is trying to figure out what's going on in their relationship and why the spark is missing. Those things tend to come up on their own and are a two-way street.

"Julie's character is constantly on deadline," he added. "He's running a business and she's running two, so they've moved in different directions. While people can drift apart, I think this movie shows they can also drift together and that's the take-away from it. If they'd sat still for a moment, they may have seen they had everything they needed. It's a little like now, with the whole world on pause. You have to think, how do I want to step out of this COVID-19 situation? Better? Stronger? That's kind of what Jillian and Justin are doing in this movie, trying to control a situation, and in this case, it's their marriage."

Concerning the film's title, Chase tells me, "I believe you can train anyone." And when it comes to him? "Am I trained, oh yeah," he laughed. "There are treats involved, but I'll do anything my wife asks me like I'm the cook in the house and I'll prepare anything she wants!

"But she's kind of trained too," he continued laughing. "Living with someone, getting to know them, it's all an adjustment. I remember when we first met on a dating website, and one that isn't run by humans. It's all done by computer algorithms. After our engagement, then marriage, I wrote to them telling our story, just to let people know that you can meet someone that way and I got a response that said, "Cool." It was a computer-automated response!"

With the pending birth of his first child, "A boy due any day now (at the time of writing)," Chase and his dietician wife Sarah are self-quarantining. He's trying to make the best of the situation and find a silver lining amidst the pandemic telling me, "My mom lost a family member due to COVID-19, but I'm trying to see the positive. We had a Zoom call and I got to meet two cousins I wouldn't have if that hadn't happened. The one good thing to come from our current situation is we have been forced to hit pause, sit still, and you're allowed to."

He's also looking forward to, hopefully, being back at work soon. "My character 'Brian 'The Fender' Bender from the Nickelodeon series Henry Danger appeared in the pilot of the spin-off Danger Force," he shared in closing. "I'm hoping there are more as I really want to do a kid's show. I want to play a dad as that's the space I am in, and I want to spend time with my son when he's here!"