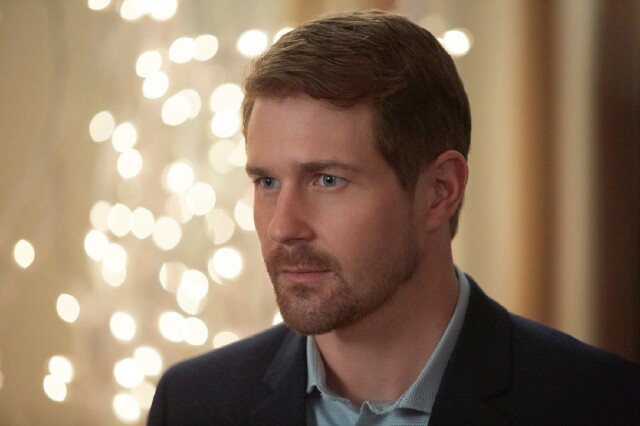 Last Christmas Hallmark Movies & Mysteries introduced viewers to the delightfully charismatic Josh Kelly when he made his network debut romancing Nicky Whelan in the heartwarming Romance at Reindeer Lodge.  Kelly returns to the channel this weekend, teaming up with Chesapeake Shores’ Emilie Ullerup, in the equally charming Christmas Bells are Ringing.  For Kelly, his annual sojourn into the wintry wonderland of Hallmark Christmases is something of a gift, and not just for him, for his family.  “I guess I'm kind of becoming the Christmas guy,” he laughed while recently chatting with MediaVillage.  “They're really fun and are also the most rewarding movies I've gotten to do.  I have done some projects that half of my family and friends like, while the other half are indifferent, but Hallmark … they all love them.  Everyone loves Christmas!

“I love how passionate people are about these projects,” he added.  “I'd never done a project before Reindeer Lodge that touched people so much.  My friends would tell me they were watching it for the fifth time and that was awesome.  I'm really proud that people accepted me, and I got to have a couple of my cousins as extras in that.  My uncle Paul and aunt Jeannie’s favorite movies are Hallmark Christmas movies, so that was like a little Christmas card to them. Their TV is always set to Hallmark, so they’re watching the movie and (surprise) got to see their kids walk by.  It’s what these movies are about, feel-good sentimental family movies.  I love that as I'm a very sentimental guy who loves family.”

Hallmark Christmas movies are a far cry from the gritty world of Lifetime’s (and now Hulu’s) UnREAL, the show that brought Kelly much attention because his character, Jeremy Caner, was involved in all manner of underhanded activities. Oddly, it was UnREAL that provided that opened the gateway to Hallmark.  “The producers of Romance at Reindeer Lodge were big fans of UnREAL and thought I was right for the part,” he revealed.  They are also far removed from his time in the military as an Army Ranger, where the lessons he learned serving his country still apply today.  “The discipline learned in the military is something you can definitely apply to acting,” he shared.  “Becoming a Ranger is very difficult, some of the tasks were challenging and a lot of people quit. But for me,  it was about not quitting.”

Kelly admitted that while each role he takes also “comes with challenges,” there was one thing about his character in Christmas Bells, Mike Phillips, that gave him pause.  “In this one I had one big obstacle looming in my head -- I can't ice skate!” he laughed.  “I had to learn how to for the movie and having conquered that obstacle, it alleviated any other stress.  I had a very traumatizing ice-skating date in high school.  I was so bad, and my girlfriend was this semi-professional figure skater, as were her two friends.  They were doing double axles and it was at that vulnerable teenage stage where you're becoming a man and these girls are asking, ‘Are you okay?’  I was just blown off the ice.

“I like confident characters and it's always good to feel good about your character,” he continued.  “[Mike] seems like a really nice guy who loves his family, but he's also trying to move on with life after going through a divorce.  They don't often show that in family movies, so to get to show true vulnerability and have a character with some depth was a lot of fun.  [In the movie] he meets up with his high school best friend Sam Rogers (Ullerup), with whom he had a summer romance when she would visit Cape Cod every summer.  In their final year of high school Mike and Sam made a pact to reconnect the following year, but Mike ended up going off with his college buddies.  Unbeknownst to him, Sam’s mother died that summer, so it's probably the one summer he should have been there for her.  Now she’s back after 13 years.”

When it comes to Christmas, Kelly says, “I'm one who’s all in.  I can imagine when I get married and have kids, I'll probably be the annoying Christmas dad.  I love it.”  He also loves that things wind down during the season and for the most part, “people seem to be a little nicer, though I understand it isn't sustainable all year.”

January will find Kelly beginning work on an action movie he said is, “very gritty and not really Hallmark.”  There’s also the 2019 release of Netflix’s What If, alongside Renée Zellweger, and he hopes to be back in the Hallmark fold again next Christmas.  “I really hope there are more Christmas movies in my future,” he shared.  “I’m trying to get a meeting to pitch a movie to them that my cousin and I are working on.  I'll be at my parents' house over Christmas and a bunch of my Ranger buddies are coming over for a Christmas viewing party.  That's gonna be fun.”

Christmas Bells are Ringing will premiere Saturday, December 22 at 10 p.m. on Hallmark Movies & Mysteries as part of its annual Miracles of Christmas programming event.