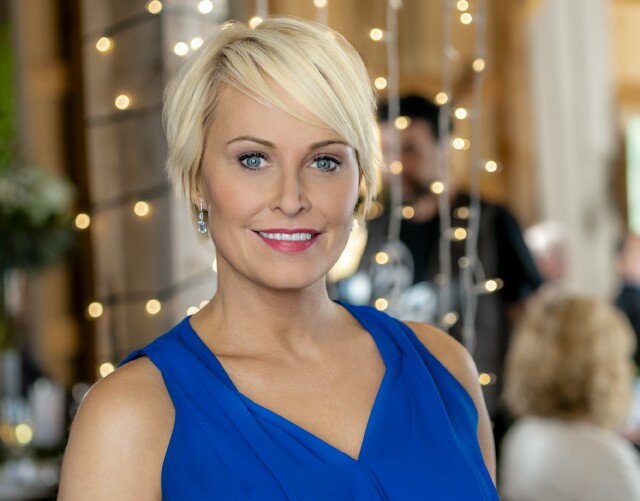 When we last saw rekindled former college sweethearts Olivia Pershing and Mick Turner in Wedding March 3: Here Comes the Bride, their relaxing Valentine’s Day plans were thwarted when family members bearing all manner of news descended on the Vermont inn they own and operate -- a dream destination for couples looking for that special place to exchange their vows.  With the premiere of Wedding March 4: Something Old, Something New this Saturday on Hallmark Channel, #hallmarkies will discover (for the most part) not much has changed.

Desperate to focus on their relationship, Mick plans the perfect romantic getaway for the couple, however, when Olivia's daughter Grace arrives unexpectedly announcing her own engagement, followed by the early arrival of the next couple to say “I do” at the inn, Mick’s plans hastily change. "I'm thinking this couple is destined to never have any alone time," laughed the movie's star Josie Bissett (pictured at top) in an exclusive interview with MediaVillage. "It really doesn't seem that way, hopefully in Wedding March 5?”

Bissett and Wagner (pictured below) told MediaVillage a year ago while promoting Wedding March 2that they were onto something special with the first Wedding March movie, but neither anticipated a Hallmark franchise would emerge.  “Who knew?” beamed Bissett of the fourth installment.  “We had no idea going into it.  I've done so many TV movies throughout my life I’d have never thought this kind of thing might happen, so it's amazing.

“I absolutely love the character of Olivia and I'm a huge fan of Canada,” she continued.  “Being a Northwest native, I can just pop over the border, work hard and come home.  I'm here on the weekends and can maintain my life here for the kids.” 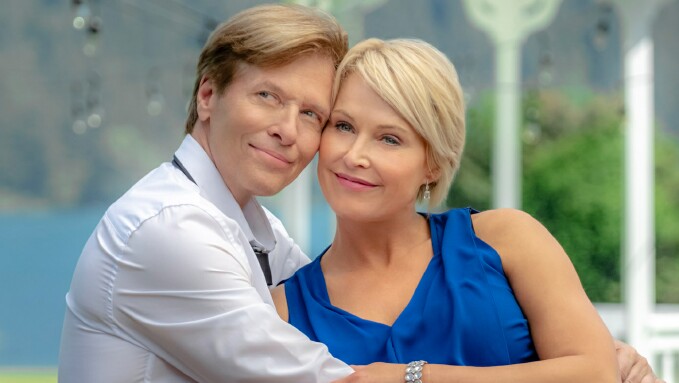 While the theme of interrupted romance remains a constant for Olivia and Mick, Bissett is quick to add that’s where comparisons to this movie and the others end.  Olivia and Mick almost take a backseat this time as the focus switches to Grace (Emily Tennant), her new fiancé Eric (Blair Penner) and newcomers Amy (Merritt Patterson) and Rob (Andrew W. Walker) as the other couple planning to wed.  “We never want the stories to repeat,” Bissett explained.  “But our characters do get to evolve and that's the major difference with this one.

“I'll admit at first we started asking, ‘what’s was going on?’” she added with a laugh. “It appeared the guest stars were working more than us!  I’ve always seen these movies as one day evolving to be kind of like The Love Boat, where couples come in and we get to host them, [and while] it's about [a new] story, our story is still there growing and evolving.”

For Bissett, getting to play Olivia a fourth time is a dream.  She admits the character “comes naturally” and is happy to do so for as long as possible.  “As a character actor you get cast in roles that definitely are in you; that might be why I really love this role so much,” she revealed.  “Obviously, Melrose Place was such a different show.  Nothing was ever based in reality so that made it kind of exhausting and after what my character Jane (Andrews-Mancini) went through, you can see why Olivia is so much fun.  She's carefree, maybe a little controlling, so I'm similar to Olivia in ways, but I am super-far from controlling.  That's just not my personality.”

She also admitted to being similar to her Melrose character Jane, and 26 years later is happy Jane stayed “mostly sweet” for Melrose’s seven-year run as it put her in good stead with Hallmark.  “The thing about [Jane] I loved was she was naïve and kind,” Bissett recalled.  “So many characters on Melrose were crazy. There were times I'd wish I gotten to play that, but in the end, I'm glad I didn't.  I’m not good at playing a bitch.  Even though Jane cried a lot, that character afforded me a lot of ad campaigns because I was considered ‘the girl next door.’  It ended up being good for my career, endorsement wise, and I liked that.  She may have been a doormat, but she was a good person and it seemed people like that, too.”

Bissett also is thrilled that through the Wedding March movies she is reunited her with former Melrose co-star Wagner on a regular basis.  “We’re good friends and both feel working together and getting to know each other on this level is so nice,” she shared.  “It's also nice to be able to trust the person you're working with and know they have your back.”

As for Olivia and Mick’s romance, Bissett is happy to let that play out for as long as possible.  “I know people want us to eventually marry but we’d love for people to be invested in new characters and new weddings, and not be focused only on Mick and Olivia,” she said.  “Of course, even if they were to get married something would come up.  It seems there's always something coming up.”

Wedding March 4: Something Old, Something Newwill be telecast Saturday, June 23 at 9 p.m. on Hallmark Channel as a part of its June Weddingsevent.