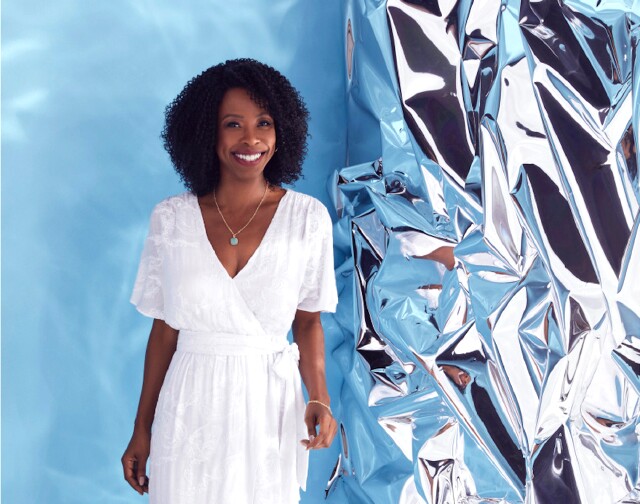 For All American star Karimah Westbrook, landing the role of Grace James on the hit CW series was a long time coming. The Chicago native has experienced success both on the big and small screens since “crashing” an audition for 2001’s Save the Last Dance, and she has also succeeded behind the scenes as a producer.  With All American entering its second season, landing a series regular gig was something she always knew would form a part of her career trajectory; she just didn’t know when.  “I didn't necessarily know how my life would look by this point,” she shared in an exclusive interview with MediaVillage.  “One of the things I set out to do was to be a series regular.  I didn't know it would take 18 years to get there, but I did keep believing it was possible and I always believed it would happen.  I just didn't know how or when.

“I think writing out my goals, along with believing in myself and sticking with it, a lot of times you have an idea of how it's all going to happen and when, but the truth is you don't know,” she continued.  “In hindsight, I don't think I would've been ready back then.   I told myself I was, but there are so many things you need to learn as a person to be able to handle certain levels of your career.  I guess I was truly ready for this when I was ready, and those life lessons were something I needed to experience and prepare me for what was to come.  I'm still learning, and I'll never stop.”

For the better part of the last two years, portraying a single mother to teenaged boys Spencer (Daniel Ezra) and Dillon (Jalyn Hall), Westbrook has done just that.  She firmly believes All American is an all-important show for our current times, and the depiction of a fractured family unit, from personal experience, has been helpful to viewers.  “Shows like this are important right now,” she said.  “They show that you're not alone and many people are dealing with real issues, no matter your class, your color, or your social and economic status.  There are heartfelt things that need to be dealt with and people struggle with.  Initially, Spencer wasn't very open, and we faced a lot of challenges, so for my character to try and figure ways to reach him was very real.  I can see it being the same for a lot of parents, especially with teams.  It's always like, ‘What do I do?’

“I love the fact we reflect those realities and offer a different perspective of looking at things,” she added.  “I love how the [football] teams on the show have their issues and learn.  For example, with the Spencer character, I feel he faces a lot of challenges, but he learns from them and then implements those lessons.  That’s something refreshing for kids to see as a lot of kids learn visually, so it's great to see that reflected.”

As the series dives into its second season, Westbrook is excited to continue her character's journey.  Last season she wanted to know everything that was happening, but this season she's taking a different approach.  “Now I really appreciate the moment-to-moment elements [of the process] because that's how it is in real life,” she revealed.  “I'm enjoying now finding things out weekly, much more than I used to.  It also comes in handy when people ask because I legitimately don't have an answer.

“But what I see, and am loving, is there is a lot of development in the characters,” she added.  “For everyone who is on this journey, it’s such a wild ride.  I actually told the writers, ‘When I get a script, I can see you guys aren’t playing around this season and I'm gonna need therapy when we're done.’  But it's a lot of fun for all the actors and the writing is fantastic.  I'm loving what's happening on the show.”

She’s also noticed many real-life parallels as the series has progressed.  “I grew up in a single-family home, except it was two girls," she recalled.  "Our father wasn't in the picture and through the show, I feel I've learned many ways of looking at things.  It's been impactful in that way but has also grounded me on the reality of raising two kids on your own and how it isn’t an easy feat.  I get so involved with my work that I really do feel the struggle of wanting your kids to be safe.  In high school, my boyfriend was a football player and my high school colors were blue and white, like Beverly High’s, and my middle school colors were gold and green, like Crenshaw High’s, so there are a few twilight zone moments within this.”

Her current success marks quite a leap from the first audition Westbrook “crashed” in Chicago all those years ago.  It’s something she recalls fondly, but in retrospect would be cautious to advocate for young up-and-comers.  “I was a lot more fearless back then,” she laughed.  “When you're younger, sometimes you don't realize and that can be good and not so good.  I just knew what I wanted and knew that I wanted to work in this business, so I just went for it.

“I'm not publicly advocating everyone do this and have all the casting directors in Hollywood upset with me,” she added in closing.  “But privately, if you ask me if you should crash an audition, I'm gonna tell you to go for it.  Just know that there could be repercussions and some backlash, but you also could have the opportunity of a lifetime.”

All Americanis telecast Mondays at 8 p.m. on The CW.