Kavan Smith on His Two Big Hallmark Premieres this Weekend 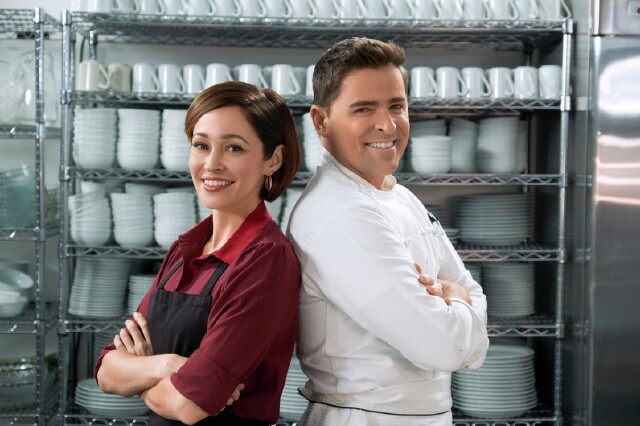 Ten years ago, when newcomer Kavan Smith walked onto the set of Growing the Big One,the moment marked his first film for Hallmark, and little did he know what a fixture he would become.  This weekend the long-established fan favorite celebrates two Hallmark events with the debut of Love on the Menu -- a movie he wrote -- and the season six premiere of a little show called When Calls the Heart, on which he’s been a series regular since season two.

“I had no clue, no clue!” Smith said of his initial outing with Hallmark during an exclusive interview with MediaVillage.  “I didn't consider myself a Hallmark actor as I'm not that classic Hollywood beauty for a guy.  But Growing the Big One ended up having some legs and a few years later I was thrown another bone and that led to When Calls. The great thing about Hallmark is the throwback to the old Hollywood studio system.  If they like you, and you work hard, you are rewarded with more work.

“It's great to have a network that is receptive and believes in you," he continued.  “I attended a Hallmark TCA event after doing maybe two seasons of When Calls; I really didn't know where the series was going and I was brought in to see if there was any chemistry with Pascale Hutton.  All of a  sudden we are six seasons in.  I'm kind of shy, and I talked with some executives at the event and afterwards thought I had zero chance of being invited back.  It turns out they are easy to talk to and if you respect their system, and deliver, there's loyalty.”

That loyalty and his chemistry with Hutton led the duo to star in The Perfect Bride and its sequel, The Perfect Bride: Wedding Bells.  However, for the role of Chef Hank Daniels in Love on the Menu, Smith found himself working opposite a new leading lady in another Hallmark favorite, Autumn Reeser -- with Hutton's blessing.  "Pascale and I were at a network meeting and it was mentioned how much they liked Love on the Menu," he laughed.  "There was a long pause, and Pascale finally said, 'It's okay!  You can compliment Autumn, I know she's good.’  Pascale's bulletproof and we have a great friendship -- so she can handle a little competition."

In the film, Smith's chef character is happily running Osteria, the Italian restaurant he and his late wife started, unaware that poor management by his brother-in-law has put them in financial ruin.  Enter Flash Frozen Foods International corporate development executive Maggie Young (Reeser) with a life-changing proposition -- a line of gourmet frozen meals created by him.  Initially unresponsive, Hank realizes this could be his only way out, especially since Osteria has lost its star rating.  As the two work on concocting the gourmet dishes, along with a restaurant makeover, Hank lets Maggie into his closed personal life.  The bond is strengthened when Maggie forms a relationship with his 15-year-old daughter Hannah (Jordyn Ashley Olson), putting love, officially, on the menu.

For Smith, the film was personal.  "One of the executives at Hallmark was on the set of another movie I did and she asked what I would like to do next.  I kind of balked, but when I got home I e-mailed her asking if she were serious.  I’d come up with an idea. Never ask an actor that question unless you really want an answer.

"I mentioned that I really liked to cook in my spare time and am fairly accomplished, so how’s about a chef?" he added.  "I wrote it as a series -- actors always want more -- but she said, 'Turn it into a movie and I think we have something.'  I didn't hear anything for about seven months, then I got a call from her saying, 'Good things come to those who wait.  We’re making your movie.'  That was thrilling."

The icing on the cake came with Reeser’s casting, as their effortless on-screen banter makes them Hallmark's modern-day Gregory Peck and Audrey Hepburn.  "After working with Pascale for so long I was nervous about working with someone new,” he revealed.  “I’ve always worked with my buddy! But Autumn and I immediately hit it off.  She is smart, fun, vivacious and I like all of that in a partner.  She’s also a strong actor and a lot of what you’ll see is us just having fun while the cameras rolled.  She was just terrific and I would work with her again any day."

Until then, Smith is hard at work on a new project with his “buddy” Hutton.  "We pitched and have signed the deal on a project being written that we'd love to shoot in an exotic location." he said.  Sadly, it won't be another installment of The Perfect Bride.  Meanwhile he's excited for Hearties to see the new season of When Calls the Heart.  "This is a big telltale season dealing with loss, grievance and new life.  I hope the fans embrace it."

Love on the Menu will be telecast Saturday, February 23 at 8 p.m., while season six of When Calls the Heart will premiere Sunday, February 24 at 8 p.m. -- both on Hallmark Channel.