Kellie Pickler on Returning to Graceland and Meeting Priscilla Presley 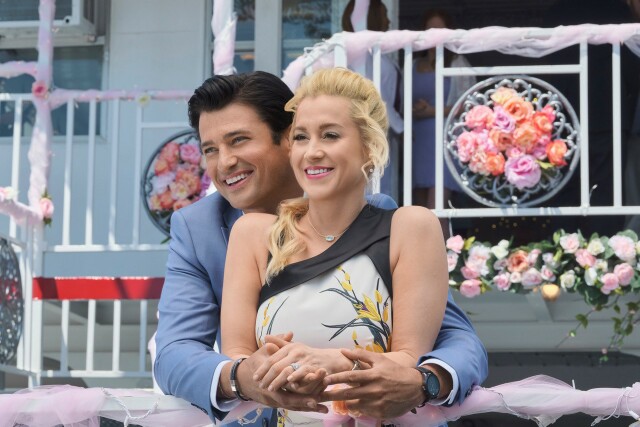 Singer, dancer, talk show host and now bonafide actress Kelly Pickler returns to Hallmark Channel this weekend in the premiere of Wedding at Graceland, the follow-up to 2018's hugely successful Christmas at Graceland.  Thirteen years have passed since Pickler roller-skated into America's consciousness as a contestant on season five of American Idol while working as a carhop at Sonic.  She didn’t win Idol, but Pickler's infectious personality and vocals made her a standout, and one of the most memorable contestants in the show's history.  It's no surprise the Albemarle, N.C. native who proudly pleaded "Pick Pickler" on Idol would eventually be picked by Hallmark to lead a movie.  She just had to conquer her own fears first.  "I was so nervous," recalled Pickler of her acting debut during an exclusive MediaVillage sit-down.  "My biggest fear in life is disappointing people.  I never want to do that.

"I'd say we're all very happy with the way it turned out," she continued.  "But I do have to give credit to Elvis Presley because I know a big part of the ratings came from Elvis’ fans.  It was wonderful and amazing that we were able to go into the studio [for the sequel] and record some of his iconic songs.  That was a lovely experience."

When viewers met Laurel Couper (Pickler) and Clay Sheppard (Wes Brown) in Christmas at Graceland, the former sweethearts hadn't seen each other in years. Their chance encounter at Graceland (Presley's former home) rekindled their relationship, which has since progressed.  So, when Clay proposes, Graceland’s chapel is the perfect venue.  But with the only available date just three weeks away, planning a wedding and making it to the altar is a bigger challenge than either imagined.

"Well, obviously there's a wedding, it's in the title,” Pickler laughed. “It’s Wedding at Graceland, so obviously Laurel and Clay are getting hitched.  I love this film so much because you really get Laurel and Clay’s back-stories and we introduce so many new characters.  You get to meet the parents.  It's very much like Meet the Parents."

According to Pickler, getting to revisit her character from the first movie made shooting this one easy.  "I was more comfortable for sure," she said.  "It wasn't my first time getting on the bull, so getting the cast back together, using the same production company and crew, along with having Eric Close direct again ... he's amazing to work with.  I was so thankful and grateful for him.  I love that he's a director who understands what the person in front of the camera is going through.  I call him 'E' and could always ask him if things were okay.  Having everyone reunite for this film, it was more relaxed, comfortable and it was great for me to get to know Laurel a little better.” 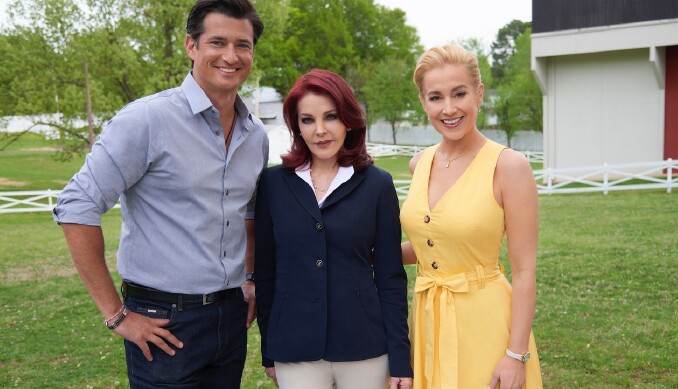 In addition to returning to Memphis, which Pickler referred to as "one of my favorite cities and filled with so much local talent," returning to Graceland would provide another surprise -- Priscilla Presley, who makes a cameo.  "Well, that was just the icing on the cake and a cherry on top!" she said of Presley.  "When Wes and I first read the script there was a mention of Priscilla and I was like, 'They mean, "The" Priscilla Presley?'  I asked Wes if he thought she'd really do it because surely they couldn't just hire an actress to play Priscilla.  It had to be her.

"I knew she didn't live there because I didn't see her the last time,” she added. “We were blown away when we learned she was a part of it.  She's just lovely and has the most incredible story.  I mean she was married to the King of Rock 'n Roll!  She carries herself with grace and is such a classy lady.  We actually talked about both of us doing Dancing with the Stars, which was an all-around wonderful experience for me.  I miss it.  Growing up in North Carolina, ballroom dancing was not a big thing, but thanks to Derek Hough, I discovered a passion for it and I'm still obsessed with it.”

As Pickler continues to spread her acting wings, she starts another movie shooting in June playing a very different character and one.  "I can't say anything about it, or I will be tasered," she laughed.  She's happy Hallmark Channel opened the door to this new phase of her career.  "Honestly, I don't know that there could have been a more safe place to do it," she said.  "They've been so good to me and have really taken care of not just me, but my heart.  And the Hallmark fans ... oh my gosh!  I had no idea how dedicated they were until I became part of the Hallmark family.

"I feel I have this army of people out there that are going to have grace for me if I fall flat on my face," she offered in closing.  "Or if I get out there and nail it, I feel they'll be there either way.  What a kind, beautiful family Hallmark is -- it's like everyone is on the same team and pulling for you."