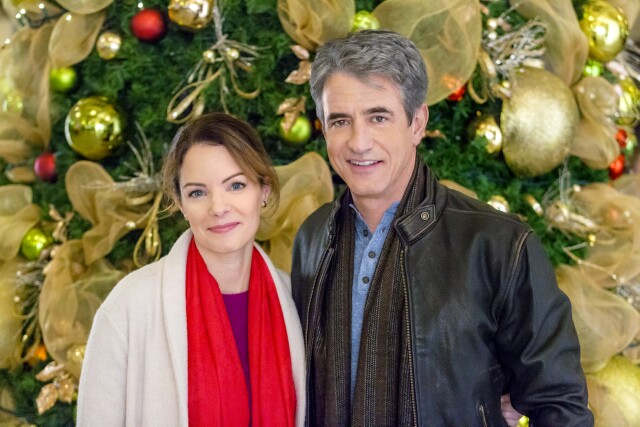 When Kimberly Williams-Paisley was paired with Dermot Mulroney for their Hallmark Hall of Fame holiday movie The Christmas Train, premiering Saturday, November 25, she was delighted to be working with someone she considered an old friend.  (The two are pictured above.)  Trouble was, Mulroney didn't quite remember things the way she did.  “I really felt like we were already friends,” Williams-Paisley told MediaVillage during an exclusive interview with the two stars.  “In fact, the first time I saw him I gave him a huge hug because we had actually met at a dinner only he didn't remember it. I was like, 'Hey, it's so good to see you!'  He was like, ‘Have we actually met?’”

“Yeah, but it did take you a long time to get where we met right,” chimed in Mulroney.  “So I might have appeared a little aloof at first, but I wanted that on the record.”  All joking aside with regard to their misremembered first encounter at a dinner, Mulroney also wanted it known that when it came to working together, their onscreen chemistry was instant.

“I already liked Kimberly,” he said.  “So I really did step into working with her like we were already friends.  I could tell just by the way she appears on screen that she was beautiful and really appealing in every way.  I knew there would be no trouble with us getting along.”

“And, we both went to Northwestern,” Williams-Paisley said with a smile.

“Although I was in a different era, [but] it was the same decade," Mulroney laughed. “I would just like to draw the distinction that they are still casting me with beautiful younger actresses.  We made the most of it in our friendship and it was really fun getting to know each other.”

That came in handy as in the movie, also starring Danny Glover and Joan Cusack, Mulroney and Williams-Paisley play former flames that encounter one another on a cross-country train ride.  Both are former foreign news correspondents, although Williams-Paisley's character has transitioned to script writing, while Mulroney has been reduced to writing fluff pieces that are a far cry from his journalistic glory days.  For both actors, getting to play journalists was something of a realized dream.

“When I was a student at Northwestern I did try to get a summer internship on The MacNeil/Lehrer Report, the Sunday news show,” revealed Mulroney.  “But they didn't hire me so I turned to acting instead.  Still, there was a moment in my college career where I could have seen myself as a TV journalist.”

“I was literally going to apply to [college] as I was quitting the business to become a journalist because I was sick of it,” added Williams-Paisley.  “I thought that might be easier.  But I got Father of the Bride and was like, ‘I guess I'm not going to be that writer.’”

Both actors admit their second outings for Hallmark couldn't have come at a better time.  (Mulroney starred in 2015’s North Pole 2: Open for Christmas, Williams Paisley in 2002's The Christmas Shoes, along with 2017’s Darrow & Darrow for Hallmark Movies & Mysteries.)  "We did choose a great time," Mulroney said.  “Not only is The Christmas Train a Hallmark Hall of Fame movie, it’s a part of the Hallmark world, and these movies are finally being reported on as something that is happening at Hallmark.

“It's not just the people who always loved Hallmark productions," he continued. "There's a whole economy out there that is finally being reported on by publications like The New York Times.  The fact Hallmark is making over 100 movies a year, nobody else is doing it.  Hall of Fame has been around for 66 years; it's the longest-running series on television with the most Emmy Awards ever won.  I find all that fascinating and the amount of work they provide actors in both countries, here and in Canada, is phenomenal news that should be reported for what it is."

In addition to acting in the film, Mulroney also provided a holiday song for its soundtrack, something Williams-Paisley was happy to plug.  “Dermot is now a songwriter!” He has The Christmas Train out on iTunes right now for $.99, it's an instant country Christmas classic that's featured in the movie.”

“I might add that Kimberly knows a thing or two about country songwriters," added Mulroney, referring to the actress' marriage to country superstar Brad Paisley.  “Our beloved director Ron Oliver incorporated it into the film and that's something I will always be grateful for.  Now it's my Christmas gift to the world.”

“He actually did bounce it off me a couple of times asking what I thought of it,” Williams-Paisley said.  “Sure enough, he recorded it himself and it ended up in the movie.  It's a really is a good little earworm.”

The Christmas Train will premiere Saturday, November 25 at 8 p.m. as a part of the Hallmark Hall of Fame series on Hallmark Channel.