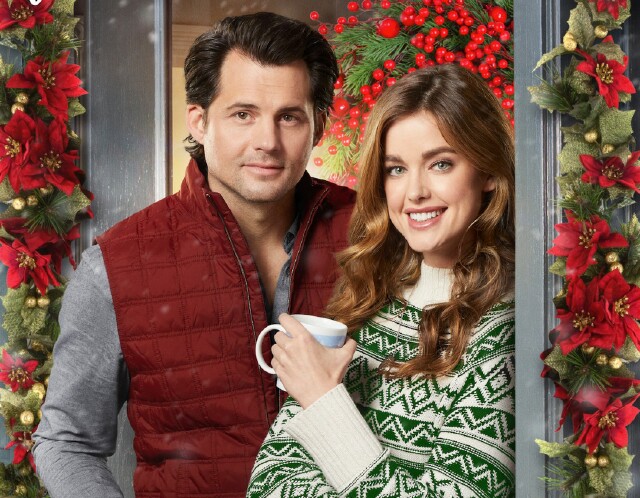 Actor Kristoffer Polaha is a familiar face on Hallmark Channel and Hallmark Movies & Mysteries.  He was last seen opposite Jill Wagner in Pearl in Paradise, and this weekend stars opposite Ashley Newbrough in the Hallmark Movies & Mysteries premiere of Small Town Christmas.  The film marks his fifth project for Hallmark, and his third Christmas movie in as many years, something Polaha is beyond grateful for, although hesitant to label a tradition just yet.  “These Christmas movies are such a blessing for me,” he recently told MediaVillage.  “This is the third year I've had one, so we will see about it becoming a tradition.  I think they usually take a little while to develop, but so far it's been really cool and the last few years have been a real treat.”

Hallmark audiences were first introduced to Polaha in 2016’s Dater's Handbook. It's an experience he’ll never forget, as it paired him with future royalty.  “I feel lucky my first [Hallmark] movie was with Meghan Markle,” he said.  “Leading up to her wedding last year, that movie was airing all over the Commonwealth, which is like 56 countries!  That was me just being lucky and in the right place at the right time.

“We were at dinner one night talking about an upcoming photo shoot she had for swimsuits or something,” he continued, reflecting on his time with Markle.  “I remember literally making a joke to her about, ‘What if you marry a royal or something?  You don’t have to do that, you're on Suits and you're good.’  She made some comment about digging a man in uniform, so when they did get married and [Prince Harry] was in uniform, I thought that was perfect.  I watched the wedding while I was in Fiji filming Pearl in Paradise, and it was a cool experience for me to be able to celebrate.  Oh, and the day their courtship went public, I did get a sweet text from her that just said: ‘Peace.  I'm out.’  Now she's in a different world and I'm so happy it worked out for her.”

In Small Town Christmas Polaha plays Emmett Turner, proprietor of Paige Turner Books, a family-owned business in Springdale, Wisconsin.  As the town gears up for the holidays, news of a pending visit by best-selling author Nell Phillips (Newbrough, pictured at top with Polaha) has the town thrilled.  All except Emmett, that is, whose history with Nell goes back years to when they were co-workers in New York.  In fact, her book, Small Town Christmas, was inspired by stories shared by Emmett. The two haven't spoken in years, and Nell is still hurt Emmett abruptly left the city and never responded to her attempts to reconnect.  Needless to say, any feelings of trepidation about the reunion are warranted.

“When I first read the script, I saw this unbridled enthusiasm [in Emmett] that really reminded me of Jimmy Stewart in It’s a Wonderful Life,” he admitted.  “I was literally like, ‘I'm just going to play Jimmy Stewart’ and told my agent that.  In my first meeting with the director I told him that also, and did something with my voice.  He was like, ‘Are you serious?’  He said he liked it but I couldn't do a straight imitation of Jimmy Stewart for the entire movie; still, there are a couple of scenes where Emmett’s voice is as high as his enthusiasm, and that's what really drew me.  These movies are written in this kind of 1940s quip; fast-paced, with a nod to adult humor while still family friendly.  This movie really spoke to me in an adult way.

“I hadn't met Ashley before,” he added of his co-star.  “We both had shows on The CW, but at different times, so we never crossed paths.  She was wonderful and so much fun to work with because she has great instincts and is really smart. I really didn't expect her to be so pretty.  When I was crafting Emmett I was thinking of making him a little more bookish, but the moment she walked in for the first table read I was like, 'Oh shoot.’  I have to rethink this and make him someone that someone like her would be attracted to.”

Polaha has just wrapped Mystery 101, another Hallmark Movies & Mysteries project (reteaming him with Jill Wagner) that’s set to debut next year, and he feels proud to be a part of Hallmark’s growing success.  “I do feel like a part of the family,” he said.  “It's amazing what’s happening culturally with Hallmark.  I remember doing the first season of Mad Men and being on set with Jon Hamm and January Jones, and no one knew what we were sitting on.  It aired and became a cultural phenomenon.  I feel the same is happening with Hallmark right now.  It's like this juggernaut, people really are paying attention and it feels like I got in on the ground floor.”

Small Town Christmaswill be telecast Sunday, December 16 at 9 p.m. on Hallmark Movies & Mysteries as a part of its Miracles of Christmas programming event.