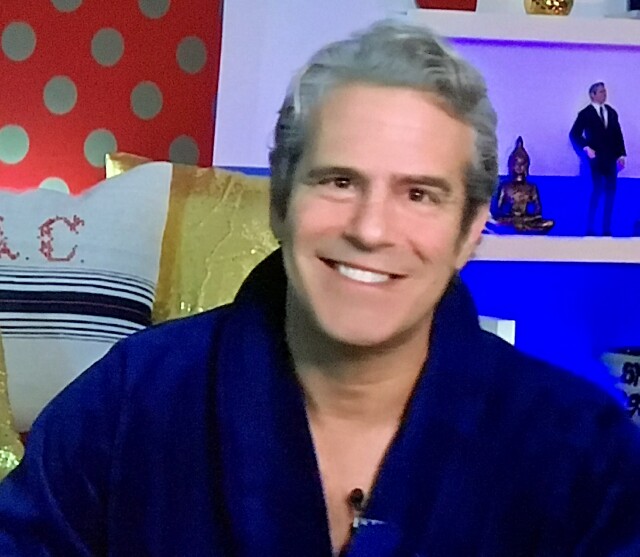 Wednesday on Bravo’s nightly talk show/party hybrid Watch What Happens Live!  host Andy Cohen (pictured above) advanced the new genre of “at-home” programming by handing out awards customized to content we have watched during the pandemic. In a nod to the idea of viewers (and to some extent celebrity talk show guests) relaxing in their own homes while watching or appearing on TV the awards were named The Golden Robes. When I first heard about them (in advance of the telecast) I briefly assumed they would honor memorable moments culled from many television talk and infotainment shows during the last seven months. It’s not a bad idea: Many of them certainly deserve recognition of some kind, if only for rapidly reinventing themselves and sharing their successes and failures for all to see.

Instead, and not surprisingly, all the nominees in the six Robe categories were stand-out moments from Cohen’s own show. But it worked, and it got me to wondering: Will legit awards organizations seek to honor @Home programs and performers in the year ahead? And on a broader level, will the perpetual changes we have seen in talk shows, especially those in late night, continue when the coronavirus pandemic finally comes to an end?

To the first question, consider Cohen’s topical categories, mostly self-explanatory: Worst WiFi Connection; Best @Home Vault Item; Best @Home Musical Performance; Most Shocking @Home Moment; Best Inspirational Moment in an Otherwise Shitty Year, and The Benjamin Allen Cohen Award for Toddler Cuteness @Home. (Vault Item refers to interesting objects or collectibles celebrities show off during at-home interviews. Benjamin Allen Cohen is Andy’s toddler and an occasional surprise guest on the show.) Theses categories may sound silly, but they largely define what the reality of hundreds of hours of at-home programming on broadcast and cable has been this year.

I was particularly taken with the Worst WiFi category, as it speaks to the fact that so many educators and local and national politicians, not to mention media executives, seemed genuinely bamboozled earlier this year by the forced realization that not all Americans can afford the latest laptops or, for that matter, an internet connection. Further, even those of us who are able to spend outrageous sums of money every month for internet access are not guaranteed reliable fast service, no matter what our providers say. Actor Jerry O’Connell, who received the Worst WiFi Connection award, lives in ritzy Calabasas, CA, and can certainly afford the finest service. (Clips of him on WWHL this year revealed that he clearly does not get what he presumably pays for.) And get this! O’Connell was on camera accepting his award from Kenya (yes, Africa), and the connection was perfect. “You have better WiFi in Kenya than you do in Calabasas!” Cohen exclaimed.

As for the second question I posed above, there are certain aspects of the “new” late-night talk-show viewing experience that I will miss when everything reverts to pre-pandemic formats. Late-night has forever been dominated by white men in business suits, all of them following the Johnny Carson model, none of them equaling the late King of Late Night as interviewers or comedians or style setters. But for a few weeks at home, and now back in their sanitized, audience-free studios, they have all loosened up considerably, and the results are much more conducive to a relaxing late-night viewing experience. Like Jay Leno did when he famously had the Tonight Showstudio remodeled to fit his own performance-space preferences, our current late-night stars are claiming their own territory.

I hate to admit it, but I think the Zoom factor has contributed to this refreshment of late night, as well. I still don’t care for it in daytime, but late at night it somehow works. There’s an intimacy to it that reminds me of the old MTV News breaks in the ‘80s when the five original VJs would invite viewers into their low-key midtown Manhattan studio for a quick download of the day’s developments in the music biz.

To cite some specific examples, I really enjoy listening to a very comfortable Trevor Noah, now sporting colorful hoodies as he gives us his take on each day’s mostly bad news from the comfort of his home. He’s more like a friend chatting with me than someone famous talking at me, and The Daily Show, the gleaming jewel of Comedy Central, is the better for it. The same goes for Jimmy Fallon on NBC’s Tonight Show. I wasn’t all that impressed with his at-home shows, which lacked his usual energy, but I now look forward to nightly visits to his new set at 30 Rock, which he shares with the socially distanced Roots but not with an audience. It’s like they are doing it all for me, rather than the people in the room. Fallon, like Noah, has switched to casual clothes, and as a result he now looks like the host he was born to be, rather than one he is playing on TV. Recently, a few guests (John Cena, Michael Che, Colin Jost) have appeared on the show in person, following strict safety protocols. Those interviews were, in a word, joyous, and the happiness was, you should pardon the expression, infectious. Isn’t it amazing how little it takes to make us smile these days?

Seth Meyers has also returned to his 30 Rock studio and is keeping it cool and casual on Late Night with Seth Meyers. I wouldn’t mind, though, if he occasionally did a show from that fancy attic (or wherever it was) that had been his work environment in recent months.

Which brings me to CBS' Stephen Colbert. He’s back in his professional place too, at The Ed Sullivan Theater, though in a room in the building rather than the theater itself. I preferred watching him from his den at home, where he conducted longish, relaxed, insightful interviews for months. Regardless, an intimate format, allowing him to play to the camera rather than the reactions of a studio audience, serves him well. I hope some semblance of 2020 Colbert carries over whenever he returns to the Ed Sullivan stage, because he is really great at engaging interesting people (especially politicians) in “extended” conversations.

Again, it’s all about the new intimacy that currently characterizes late-night talk programs. It’s something Andy Cohen knows well. Next week he will return to the famous Bravo Clubhouse (the longtime set for his show). More than any of the other late-night talk shows, his small studio filled with interesting mementoes has always been a key component of his show’s appeal. I assume he will continue to Zoom, at least some of the time, and that he will still have fun with that.