Leanne Ford and Friends “Rock the Block” on HGTV

By Steve Gidlow October 18, 2019 Behind the Scenes in Hollywood Archives 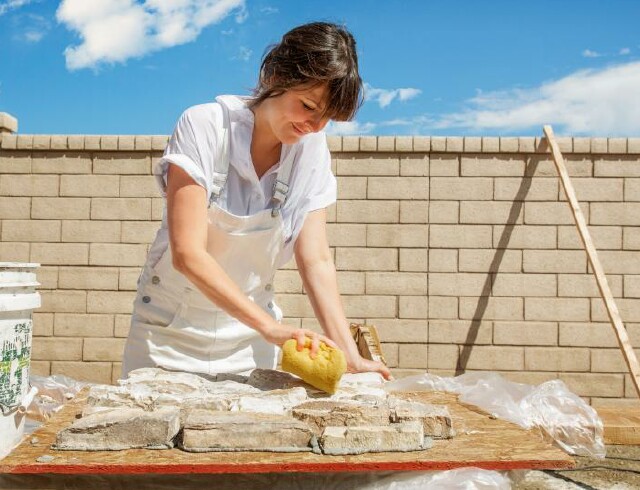 For HGTV personality Leanne Ford, participating in the network's new four-part competition series Rock the Block was an easy decision, as it marked a definitive departure from her usual gig on Restored by the Fords.

Block pits four of HGTV’s top creative talents against each other in a race to transform identical suburban homes into extraordinary spaces.  Ford, Jasmine Roth (Hidden Potential), Mina Starsiak Hawk (Good Bones) and Alison Victoria (Windy City Rehab) are each given a $175,000 budget and just seven days to remodel and boost the value of the houses.  While there is no actual prize for the winner, whoever adds the most value to their home claims bragging rights and gets a street named after them.  (Pictured below, left to right: Starsiak Hawk, Roth, Victoria and Ford.) 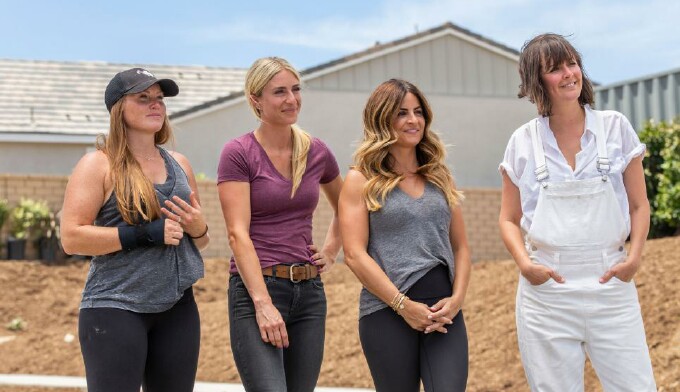 “On Restored we fix older homes and find the homes’ character,” she told MediaVillage in an exclusive interview.  “For [Block], we had to bring in the character and warmth, which was a whole new challenge and a lot of fun.

“I actually laughed when I first heard the premise of the show and was like, ‘You guys know I am not competitive, right?’” she continued.  “No one ever wants to play Monopoly with me as I'm like, ‘Here, just take it.’  I said I would do it, but I wasn't going in trying to win.  I just wanted to concentrate on making a beautiful home, so that's exactly what I did.

“The funniest thing is the other girls were all so competitive and they thought that acting like I didn't care that was my strategy, just to scare them.  It actually worked to my benefit.  As a designer, I always make it my goal to make something that I don't want to leave.  I can say, we did not want to leave that house because it was so dreamy.  The concept of getting a blank canvas was something special.”

For the series, each contestant is afforded a contractor to work with, and assisting Ford on her challenge is, of course, her brother Steve, with whom she stars on Restored.  Given how much time the siblings spend together, you might think she’d want a change of pace, but that isn’t so.  “As much as I hate to admit it, I couldn't have done this without Steve,” she laughed.  “There is a way I like to work, and I have this artisanal value to how I like to design.  I believe you are only as good as your team.  We do things unconventionally, and often in what some would say is the wrong way, so finding a contractor to do something the wrong way is a challenge.  It was good having my A-team, and Steve is definitely a part of that.”

Leanne and Steve also recently participated in HGTV’s blockbuster hit A Very Brady Renovation, something Ford is still glowing about.  “I was totally blown away by how it was received,” she said.  “The whole thing was surreal from start to finish, from getting the house, to getting the call to help, learning what the brand was, and then working with the Bradys, it was wild!  It was one of the best perks of being a part of the HGTV family.  We all love the Bradys.  I couldn't believe we got to do the kitchen (photo below).  I grew up with it, so it was just a magical experience.”  (See more photos of the renovated Brady home here.) 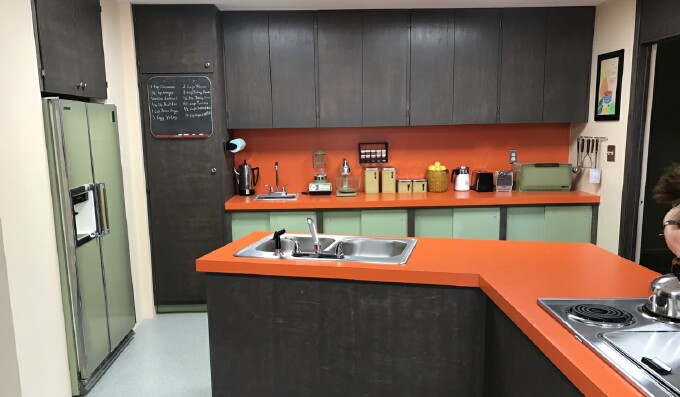 The mid-century vibe of The Brady Bunch home is something Ford admits leaning towards, as she describes her style as “minimalist/maximalist.”  While a contradiction in terms, it was a major influence in creating her dream home on Rock the Block.  “Eclectic is a go-to adjective for a lot of people,” she explained.  “[My style] is a mix of my unique flow and having a lot of stuff that clings to your eye.  I tend to stay with neutral colors with a lot of stuff.  I mix and match things like chairs, so keeping the colors cooler makes everything feel a lot cleaner.  So, it is minimalist, and then it's maximalist.  Even with a minimalist concept a home should be welcoming, always warm and cozy, even when it's clean.”

While some of Rock the Block’s participants chose to spy on their competitors, Ford preferred to keep focus.  “Steve actually [spied],” she shared.  “I wouldn't let him tell me what the others were doing.  I put my blinders on and minded my own business.  Eventually, we did get to see each other's spaces, and I couldn't believe how different they all looked.  I only ever saw [my] house in one way; as soon as I walked in I knew exactly what I wanted it to look like.”

Ford wouldn’t reveal the winner of Rock the Block, but she did tell me “bragging rights” were more important than having a street named after her.  She’d love a rematch, as she loved working with the other ladies.  She has a new book (with Steve) called Work in Progress: Unconventional Thoughts on Designing an Extraordinary Life, that will be published later this month.  “The book is about our path that led to HGTV,” she said.  “I hope the big takeaway for people is to not be afraid to fail.  The failures in life create your successes and propel you forward.  I think creativity is everything and people need to stay loose and relaxed, be creative because it's fun.”

Rock the Blockis telecast Mondays at 9 p.m. on HGTV.