Are We Losing Respect for Advanced Creative Abilities?

A couple of weeks ago The Cog Blog commented on the power of specialism and the danger in kidding ourselves that just because a media agency happens to have someone (or a team) on staff with a creative title then those people are a like-for-like substitute for a creative agency team. 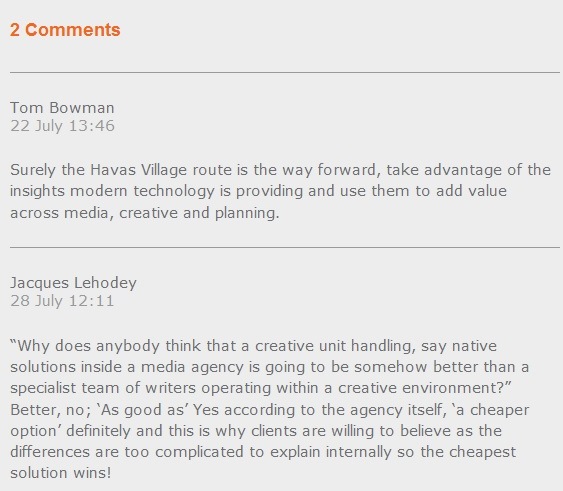 Jacques makes the point that even though creative solutions emerging from media agencies may not be better than those from creative agencies, they do tend to be cheaper: "Clients are willing to believe as the differences are too complicated to explain internally so the cheapest solution wins!"

This hits the nail on the head.  Far too many clients don't have the courage or indeed the wherewithal to explain to their colleagues that Idea A is more likely to work than Idea B. One option is to fall back on research; thus in effect passing the responsibility for the decision on to someone else. A second option is to reduce everything to cost; anyone can understand that A is cheaper than B.

We are in danger of losing respect for those blessed with advanced creative faculties. Like it or not there are people who are good at making a judgement based on an idea's potential, be that creative or business-building or (most likely) both.

The BBC recently aired a fascinating behind-the-scenes documentary on the creation of the 2012 London Olympics opening ceremony. Aside from showcasing the huge amount of work that went into the final show, the program also commented on the role played by politicians. Those who viewed the ceremony might remember a major segment celebrating the NHS, starring volunteers from the NHS. It seems that our Health Secretary, Jeremy Hunt, tried very hard to have this segment downgraded to a simple stroll around the stadium by happy smiling NHS staff.

Danny Boyle, the director, refused.  In fact he threatened to pull not only the NHS segment but all volunteers (the whole opening ceremony cast in effect) from the show. Hunt lost the argument, and the world marvelled at Boyle's production.

Hunt may have been driven by political expediency, but politicians and civil servants of all shapes and sizes were kept away from Boyle and his team by Tessa Jowell, a Labour politician charged with delivering the Olympics. Jowell was the account woman, keeping the client from interfering with the creative process and with the confidence to back her judgement in the team's ability to deliver something wonderful.

She allowed the creatives the space to create, in other words.

Back in the day, one agency I worked in, Leo Burnett, tried operating a "three-strikes-and-you're-out" rule. Clients having bought an idea were allowed to make two amendments. On the third occasion the idea was off the table and the whole process started again.

Named individuals were thus held to account for the failure of a bought idea to progress. It was a nice if crude idea which didn't last long.

There has to be a respect for creative judgement.

Tom Bowman's comment promoted the Havas Village concept (placing all Havas London agencies from all disciplines in one venue) as the modern equivalent of the old full-service model.

I wish Havas well with this, but it's not sufficient simply to put everyone in one place (although that certainly helps).

Full-service, integrated thinking, call it what you will -- but the key ingredient for success is a state of mind, a mutual respect for others' skills and abilities, whatever the discipline.

Land-grabs driven by parochial revenue chasing might be a short-term way of ensuring an internal target is hit, but they do nothing to deliver the most effective solutions to the client.