By Oriana Schwindt Conversations with the Community Archives 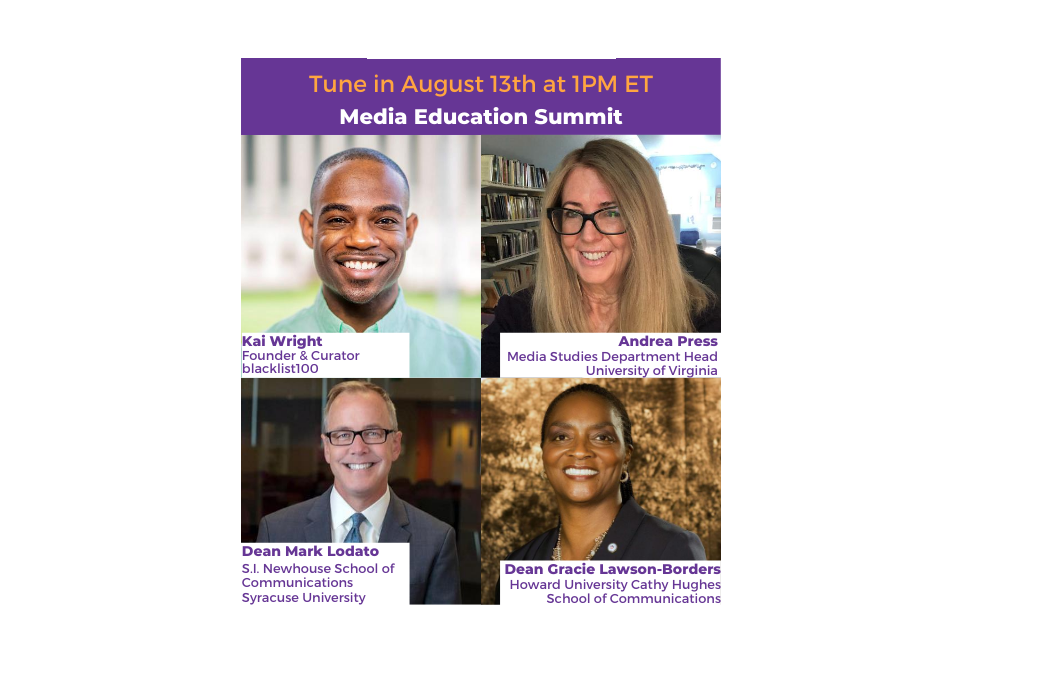 The entire media industry is at a crossroads in just about every respect: diversity, equity and inclusion efforts have had minimal success outside of entry-level positions. Higher education has had to make major changes to accommodate the safety needs of students and faculty. Economic troubles have forced massive funding and budget cuts in both private and public sectors. The First Amendment is under attack, and journalism educators like Mark Lodato, brand-new Dean of Syracuse's S.I. Newhouse School of Public Communications, are calling on industry leaders to champion the right to a free press and to combat both "fake news" and actual mis- and disinformation.

The question for the industry isn't how it gets back to normal, but how it can use these challenges to build a better, stronger, more inclusive future.

Lodato sees virtual internships as a crucial step in making opportunities in newsrooms and agencies accessible to all.

While Syracuse itself has prepared to offer its students the full in-person experience this fall, Lodato says the university is prepared to go fully remote as well, and every student will have the option of remote learning from the first day of classes.

This flexibility is similar to that Lodato would like to see from corporations, even as some of them look to go back to in-office work. Lodato comes to Syracuse from Arizona State University's Walter Cronkite School of Journalism and Mass Communications, where he said he measured success not by exclusion—i.e. an extremely low acceptance rate—but by who was being included. Offering these remote internships is a huge step toward inclusivity because it lowers the barriers to access—gone is the need for money to move, the need to find another job if the internship isn't paid, the need to find alternate family care if the intern has children or other familial responsibilities.

Institutes of higher education are often the surest way of stocking diverse pipelines, but internship partners also need to do a better job of working with higher ed to find the candidates that their organization actually needs.

"One size does not fit all," Lodato said. "What NBC News needs is different from what Univision needs from what Meredith Corp. needs." Those needs should be clearly articulated and have a clearly defined, actionable strategy for fulfilling them and for supporting the students. That requires much more work on behalf of faculty and the company, but is all the more rewarding. It also requires more outreach.

"We all need to think of doing more outreach than we're doing," said Andrea Press, founding faculty member of the University of Virginia's Media Studies department and its current head.

"One strategy we've all been pursuing is bringing successful minorities back to campus," Press said. "But it puts a lot of pressure on our successful minority graduates—they're not the only people responsible for encouraging students and bringing them in and mentoring them. We all have to take this job of mentorship a lot more seriously."

Part and parcel with expanding mentorship is figuring out what one's implicit biases are and how they're affecting the choices one makes as a mentor. Press encouraged everyone in a position to mentor to "realize that [mentorship] is a very extensive process of encouragement and amending our own biased means of evaluating people's performance productivity and potential."

Press has long understood feminism to be an intersectional movement, one that requires fighting on behalf of minority groups in order to achieve true success. Biases against female, BIPOC, or LGBTQ+ individuals don't only present themselves in the hiring or admissions processes.

Statistics about the appalling lack of diversity in the executive ranks of media companies, even while diversity in entry-level positions is improving, tells Press that there's a massive problem in how the work of minority employees and students are being evaluated. "We can actively recruit minority and female candidates," she said. But "this issue of retention has to do with how we render judgments on people's performances. We have a lot of work to do in terms of addressing biased means of rendering judgments on women and minorities."

Class bias is an issue as well, one that media coverage of events like the pandemic have only made abundantly clear. Press pointed out the absurd number of stories appearing in mainstream outlets like the New York Times that deal with the cost of private jets or real estate in the Hamptons, at the expense of stories about childcare solutions for single parents.

"We need to pay attention to the problems of working people," she said. "I would like to see [the media] show more imagination and critical thought" about solutions to problems that are really affecting large numbers of Americans.

Internships are a traditional way of stocking the talent pipeline. But there are limited internship spots—even if these internships are virtual. Another opportunity to cast a wider net is for corporations to fund research at universities, said Press.

"I'd like to see the industry partnering with our faculty on projects and investigations and large-scale endeavors that can involve our students at every level," Press said. These projects can provide valuable insights for the corporations in addition to identifying potential talent from the undergrad and grad student pools.

There are barriers to the widespread adoption of this approach. "Corporations are risk-averse," Lodato said. " We have to remember that it's okay to get out there on the ledge and you have to take risks to have real change." He acknowledged that the risk of failure will always be present, but that failure is not the bogeyman it's made out to be.

"That's innovation," he added. "Fail quickly and move on. Let's not be afraid to take some risks in finding these solutions."