Hallmark Favorite Lindy Booth Branches Out "Under the Autumn Moon" 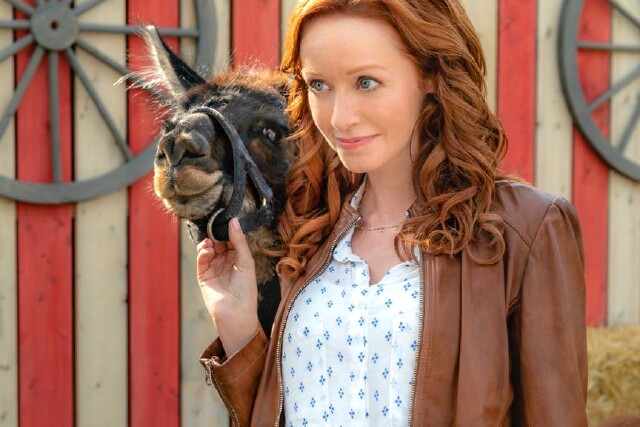 Hallmark favorite Lindy Booth has been promoted.  After starring in four Christmas-themed projects for both Hallmark Channel and Hallmark Movies and Mysteries, Booth finds herself in the midst of Hallmark’s Fall Harvest programming, starring this Saturday opposite Wes Brown in Under the Autumn Moon.  "I am really branching out!" she joked during a recent exclusive interview with MediaVillage about the seasonal switch from Christmas to fall.  "I love fall, as it's my favorite time of year, so when this one came up and I just loved the idea,” she said.  “Having the opportunity to be a part of Hallmark's Fall Harvest lineup was amazing.  I couldn't wait to be a part of it."

In Under the Autumn Moon Booth stars as Alex McKenna, a busy junior executive at Great Frontiers, the country’s leading outdoor recreational goods and gear retailer.  Alex has her eye on a major promotion, so when her boss asks her to scout out Harmony Ranch (a dude ranch), with the intent of purchasing it as a company retreat, she happily accepts the offer.  Upon arrival, she meets rancher Josh Ketchum (Brown, pictured below left with Booth), who reluctantly has to sell the ranch he calls his childhood home due to finances.  Faced with the challenge of making Josh feel comfortable with a sale, she assures him she’ll do her best to make sure the ranch’s heritage stays intact and does not become a victim of “progress.”  But when she falls in love with the ranch and all surrounding it, Alex has no idea her life is about to forever change. 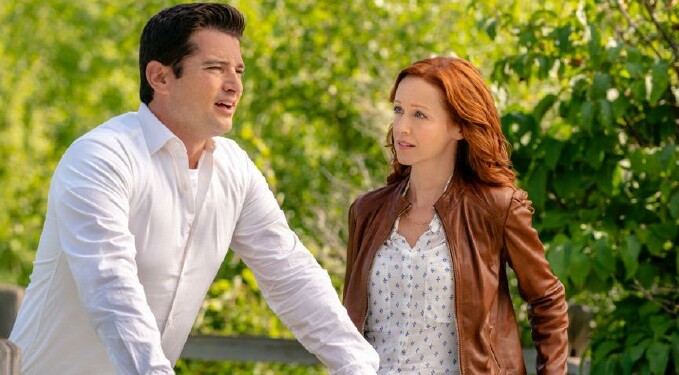 “We shot the movie just outside of Winnipeg in Canada,” Booth said.  “It was stunning.  I've worked there a couple of times.  The last time I was there it was the dead of winter and we shot all night as it was a thriller, so I will say it's far prettier in the summer than the dead of winter when it is freezing cold. I didn't have a good memory of my last stay, so it was nice to see it in it all its glory.

“And who wouldn't [fall in love there]!” she continued.  “I could have fallen in love with a goat -- [in fact] I did fall in love with one.  The goats in the film are so cute, along with the kittens and the llama.  It was just so beautiful.  In that environment, anyone could fall in love.”

Booth has a reputation for doing projects she feels passionate about, and Under the Autumn Moon ticked all the boxes.  “The movie's message of nature versus progress is always something I think about,” she said.  “It was nice to have that layer in there.  It's a very sweet movie and at the same time having that message of how important nature and the environment are to our lives was important to acknowledge.

“Actually there were a few things in this movie that excited me,” she added.  “There's a beautiful relationship in the film between Alex and her boss.  The way he brings out the best in her, and the idea that she's a devoted hard worker who has spent her whole life focused on her career going from one goal to the next, that is something I could really relate to.”

Booth saw her role as offering a new take on the standard workaholic character.  “She was working for the sake of working and getting the next job,” she explained.  “But her passion and reawakening of the outdoors, the environment, nature, horses -- all of it -- made her better at her job and that's a great message!  A million people can do any given job, but it's the passion you bring to it that makes you unique and better at it.  That's the strong and interesting message in this movie.  I really connected to that -- and I also just wanted to ride horses!”

In fact, she did all the horse riding in the movie herself, and she’s extremely proud of that.  “I did Rocky Mountain Christmas for Hallmark last year where I also got a chance to ride,” she recalled.  “Both sets had great trainers available and I took lessons.  I’ve always loved horses, only as it wasn’t financially viable as a kid, and I never got to take lessons.  But every chance I had I would ride at camp or on vacations.”

This is just one of the many things for which the actress continually thanks Hallmark.  “It's such an incredible family to be a part of,” she said of the network.  “Hallmark is supportive of its actors and talent, and that is a great feeling.  One of my favorite parts of doing these [movies] is the family interaction.  People love these movies and they become a part of people's lives and holiday traditions in a special way.  They put smiles on faces and as an artist and storyteller, being able to make people smile is one of the most important things we can do.  Being a part of someone's smile is such an amazing gift!”

Under the Autumn Moon will be telecast Saturday at 9 p.m. on Hallmark Channel as a part of its Fall Harvest programming event.