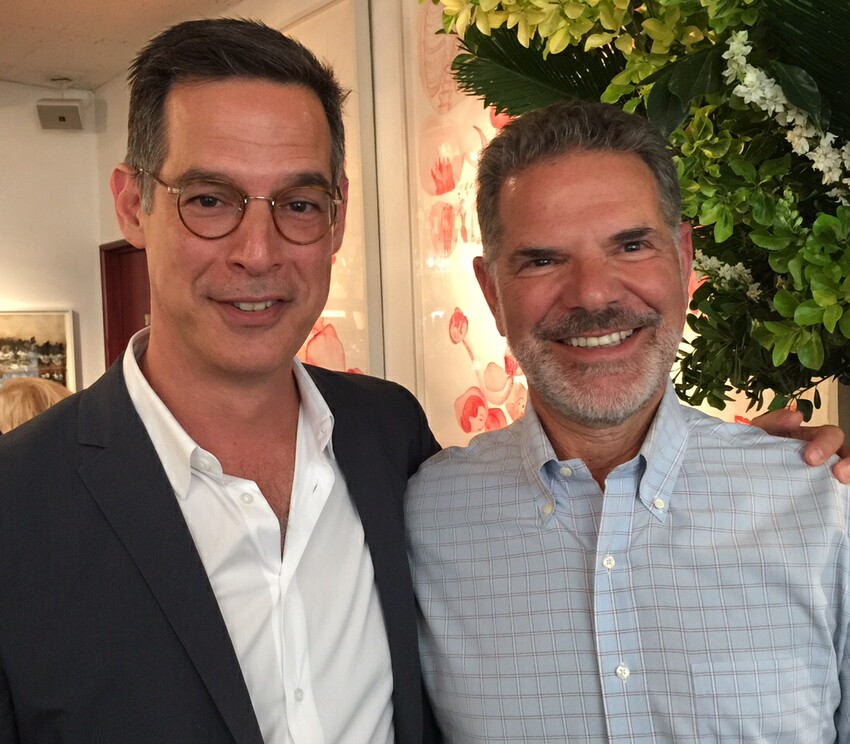 It’s not every network chief who has the luxury of at-home, demographically desirable career assistance. Tom Ascheim can count himself among the lucky ones. When he interviewed for his current position as President of Freeform (formerly ABC Family), one of the first things he did was talk to his teenage daughters -- ages 14 and 18 at the time -- about the network and its top show, “Pretty Little Liars,” which was also one of their favorites.

His daughters were already fans of the programming on Freeform before he made the move there in December 2013, Ascheim recently told Jack Myers and myself over lunch at Michael’s restaurant in New York City. Because they took an interest in the network before he did, he considers their choice to be “honest viewing,” noting that when they were in their teens they were “on the younger end of our audience, but the passionate end.”

His daughters provided “prescriptive notes about things that were good and bad,” Ascheim (pictured at top with Myers) continued. “I got the rundown of what had happened on ‘Pretty Little Liars’ when I decided I had better know a little bit more. They were really helpful.” The 14- and 18-year-old (now ages 15 and 19), he added, “are slightly different about what they like.”

Given the demographic target of the network, which concentrates on viewers in their teens and twenties, there was much talk during the lunch about Millennials, a growing group around which Ascheim’s entire life now revolves at home and at the office. (He also has a 22-year-old son.) When he mentioned that his youngest daughter is in France this summer, learning to speak French, we couldn’t help but compare and contrast the lives so many kids lead today to our own experiences when we were that age.

“I did not go to France when I was in high school,” Ascheim laughed. “I worked. I worked as an air conditioning repair man. I worked for a political candidate running for borough president in the Bronx, handing out flyers. The air conditioner repairman was the age I am now but he seemed like an old guy at the time.”

Asked to identify the primary differences between kids then and now, Ascheim instantly replied, “I didn’t live through 9/11 as a kid. My oldest daughter was in her first day at kindergarten. My son was in second or third grade. Nobody knew what to say or what to tell them. My wife was coincidentally in Washington and couldn’t get home.”

Pausing for a moment, Ascheim reflected, “We all had our day. It was a bad day, bad week, bad year. It’s core to them.

“Our histories are different,” he continued. “My history is the ‘60s. That informed a lot; the sense that young people were powerful and optimistic that the economy was going to be good for them. I think the life stage question is forever, but the context is different. Today [kids] are connected to everybody all the time.” On the subject of technology and digital adaptability, Ascheim noted that his 15-year-old is “better at it” than his 22-year-old.

The life stage to which Ascheim was referring is that with which Millennials have been long identified – the high school and college years and the often tumultuous twenties that follow. Long before he joined Freeform the network had started to focus on Millennials “because they were young and it made a ton of sense,” he said. But that was over ten years ago. Now, Ascheim noted, to somewhat bone-chilling effect, “The oldest Millennials are pushing 40.”

As noted in Freeform’s Upfront presentation, the network has as a result made a significant change in its brand identification and targeting. “We had a moment when we asked, ‘Are we going to chase or are we going to stay with the life stage?’” Ascheim recalled. “Our targets tend to be high school, college and twenties -- coincidentally the lives my children are leading. We think the biggest question people are asking themselves at that moment is, ‘Who am I becoming?’”

Hence, the network’s new name for its old target: Becomers. Young people, Ascheim said, are grappling with who they are going to be -- who they are becoming -- relative to the world around them. “They are an eternal idea,” he explained. “If we were sitting here as our younger selves we’d be talking about the firsts we’re dealing with -- first jobs, first girls, first college experiences. What is my future going to be? It’s in Shakespeare and it’s still here.”

For teenagers in particular, he said, “television is a simulation for the life not yet led. So shows like ‘Pretty little Liars’ and ‘The Secret Life of the American Teenager’ allow them in a refractory way to experience that which they haven’t tried; to kind of form their sense of self.”

Like most executives in the entertainment business, Ascheim’s career path followed the natural enthusiasm he had in his youth for movies and television. “I made little movies when I was a kid,” he said. “There was nothing more exciting to me than going to the movies. And the fall season of television. I didn’t know you could make a living at it.  The idea that maybe this thing you love could be your job was a little surprising.”

After graduating from Yale (where he was heavily into liberal arts) Ascheim became an assistant to a producer in New York City. “I wrote tons of treatments and got coffee and dry cleaning,” he recalled of the experience. “I wanted to be in the media making TV and movies. Nothing we developed while I was there got made.” His next move, working for Silver Screen Partners, brought him close to his future employer. Silver Screen “raised about a billion dollars for Disney in limited partnerships in the ‘80s,” he said. “That’s what funded Michael Eisner’s first round of movies: [Disney classics] ‘Beauty and the Beast,’ ‘The Little Mermaid,’ ‘Aladdin,’ a whole lot of stuff.”

A return to Yale followed, this time for a MBA in Business, and then “I was all of a sudden the business guy at Viacom. It was a great time to be there. I got lucky.” Ascheim honed his skills at making and marketing television for kids through his involvement there in various capacities with Nickelodeon, Nick@Nite, Nick Jr., The N and Noggin.

Before moving to Freeform, though, Ascheim made a dramatic if temporary change in his career trajectory, moving to Newsweek in 2007 as CEO. “It was an odd sideways move,” he admitted. “I had worked at Viacom during the time when the economy went [way up] and our business model went [way up] and we all felt super smart and unconquerable. The pitch to go to Newsweek was, the family is never going to sell and they understand the urgency of change. It was election time. It’s a little hard to remember how exciting the political scene felt in the summer of 2007. I wanted to see that from the front seat.”

Of course, the economy spectacularly crashed a year later. “I underestimated what happens when a business model goes bad and how fast you have to move,” Ascheim reflected. “The lesson I took away is, when you see warning signs, you need to sprint. You need to act and be decisive. When it goes bad it goes bad fast.”

Ascheim moved on to Sesame Workshop as Chief Strategy Officer and Executive Vice President of Sesame Learning, and then to Freeform in December 2013.

While most of the series on Freeform have a family at their center, or a family-like feel to their central relationships, the established brand of the network would seem to be at odds with its new focus on the pursuit of the Becomers, given that most people in their late teens and twenties are seeking to pull away from their families, explore the world and discover who and what they are. Could this mean that Freeform will follow the lead of so many other cable networks and begin referring to itself as something else entirely?

“You’re not the first person to ask this question,” Ascheim acknowledged. “The truth is we don’t know yet what we are going to do. We’ve talked about it internally. We do research with our audience. They know what the content is and they love it. I think that for people who are not yet fans of our network … it signals something that probably is incongruous with a lot of our content. So for that reason we’re going to look hard. I hope one day we’ll be able to do something about it.”

Maybe his kids can help him with that.