Lunch at Michael’s with Al Roker 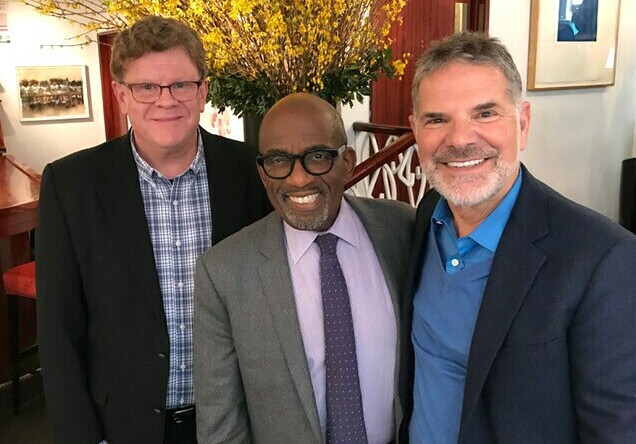 It is less than two weeks before Al Roker, inarguably the best-known weatherman in the country and the most famous that the television business has ever produced, is going to embark on the Today show’s third annual Rokerthon, in which he visits five college campuses around the country in five days with the goal of setting a new Guinness World Record at each one.  Al has famously traveled the world over during his decades at Today, but it is the Rokerthons that embed him squarely in the worlds of Millennials and Generation Z.  As it happens, he says, when it comes to the media, young people aren’t all that different from the rest of us.

“It’s funny, as much as everyone talks about new and old media -- and yes, we have smaller audiences than we did ten years ago -- I think what broadcasters and new media people are finding is that at the end of the day for a communal experience nothing beats live television,” Al mused over lunch at Michael’s restaurant in New York City with Jack Myers and me.  “The idea for the Rokerthon popped up almost accidentally because [years ago] we were doing something at Arizona State in Phoenix, and we were going to do it in just one dorm and half the school turned out.  All these young kids were telling me, ‘I grew up watching you!’ It’s part of their life and they still want to be on TV. (Today has posted highlights of Rokerthon 3, which took place March 27-31.)

“This is Today’s 65th year,” he continued. “People can be on Snapchat, Instagram, Facebook Live, Periscope … their families and friends can see them wherever, but it’s not the same as being on TV.  It’s a shared experience.”

Al’s love of broadcast television doesn’t mean he’s old fashioned. “I love doing Facebook Live, Periscope … anything interactive,” he said. “It’s part of the present and future.”  But he does have certain reservations about the media today.  “It seems odd to me that there are now bloggers at White House press briefings.  I guess it’s how the print people felt when the radio people starting showing up; how the radio people felt when the TV people started showing up.”

Still, like so many of us, he can’t help comparing the “standards” of the media today with those of the not-so-distant past.  “By the very nature of where you were there was a certain gravitas, a certain veracity to what you were doing,” he said.  “Now, the scary part is people can put the same weight on WhoevertheHellYouare.com as they do nytimes.com.  That’s a little frightening.  My mantra to my kids is, just because it’s on the Internet doesn’t mean it’s true. You’ve got to find some sort of way to verify it.”

As the devoted father of three children – Courtney, 30; Leila, 18, and Nick, 15 – Al shares many of the same concerns parents today have for the future of their kids.  It will surprise nobody that climate change is at the top of the list.  Asked if he takes a political position on the subject, he replied, “I wouldn’t call it a political position.  I don’t even accept that.  There is nothing political about it. It’s a scientific position. Climate change is a proven fact.  There’s no question that sea levels are rising, the climate is changing.  You can argue, perhaps, the extent to which human-created greenhouse gasses are impacting it. But there’s no denying it.

"To call climate change a hoax is the greatest scientific denial since folks claimed the world was flat.”

Al began his career in weather-casting in the mid-Seventies when he was a student at SUNY Oswego.  “I didn’t plan to be on TV,” he said.  “I was going to be a producer or writer. I went to SUNY Oswego in upstate New York because they met my stringent requirements: They accepted me!  At the end of my sophomore year I got the weekend weather job at WTVH-TV channel 5 in Syracuse (where his colleagues included former NBC Olympics anchor Bob Costas and future NBC Olympics anchor Mike Tirico).  The communications chairman, Dr. Lewis O’Donnell, who had once told young Roker he had “a perfect face for radio,” put him up for the job.

“I would drive back and forth between Syracuse and Oswego on the weekends,” he said.  “Just as I got the job there was that first oil embargo in 1974 and gas went from 50 cents to one dollar a gallon – if you could even get it!”

After graduation weather forecasting then took him to a two-year gig in Washington, D.C., at the independent station that would eventually become Fox 5. Then it was on to the NBC station in Cleveland for five years. “I enjoyed that,” he said.  “I really like Cleveland. I have a sister who lives there now.”

The native New Yorker returned to the Big Apple in 1982 when he took the weekend weather position at WNBC-TV.  “Dr. Frank Field was the weekday weather guy,” Al recalled. “Six months into my job here doing weekends he left to go to Channel 2 in a contract dispute and I got the Monday thru Friday gig. That was July 1984.”  In September 1987, NBC added a Sunday edition of Today.  “I started doing the weather there and simultaneously started filling in for Willard Scott on the weekday show,” Al said. The rest is modern television history.

Al grew up in New York, mostly in Brooklyn and Queens. He went to Xavier High School in Manhattan. He owns the house he grew up in, which is currently home to a niece and nephew of his.  His mother worked “for a few years” as a nursing assistant. His father was a bus driver who worked his way up to dispatcher and eventually moved into management with the MTA.

“He drove out of the 5th Avenue depot,” Al recalled. “That was the depot that Ralph Kramden drove out of on The Honeymooners. The 5th Avenue Depot in Brooklyn. They’ve torn it down and rebuilt it.  It’s now the Jackie Gleason Depot.

“We used to call our father Ralph,” he laughed. “Hey, is Ralph home?”

Our conversation turned to mentorship, prompting an especially thoughtful story from Al about his dad.  “My dad retired at 55,” he said. “He wasn’t enjoying what he was doing and said, ‘That’s it. I’m done.’  I knew what my dad did, and I knew who he was as a dad, but I didn’t know the extent of how he affected people until he passed.  At the wake, people were coming up and saying, ‘Your father saved my job. Your father did this or that.’”

Al paused for a moment, then said quietly, “You don’t know whose life you’re going to touch. My passion is just trying to touch people’s lives, to take the time to find out what’s going on with people. What do they need? What do they want?” He said he makes a point of talking to young people at his multi-media content company, Roker Media, and at the Today show. “I’ll take them out to lunch. Ask them, ‘How are you doing? Where are you going?’”

Al has written several books, most notably two cookbooks (Al Roker’s Big Bad Book of Barbecue and Al Roker’s Hassle-Free Holiday Cookbook) and a series of three murder mysteries -- The Morning Show Murders, The Midnight Show Murders and The Talk Show Murders. The latter three are currently being readied for production at Roker Media and will be telecast on the Hallmark Movies & Mysteries channel. (Roker Media has since the Nineties produced a number of television series, most notably for Food Network and The Weather Channel.)

“My main character in the novels is Billy Blessing, a bald, chunky charismatic New York chef who is also co-host of a network morning show and solves murder mysteries on the side,” Al explained. Because Hallmark “is a little more female-centric,” he said, “Billy is going to be B-i-l-l-i-e and be played by a woman.” If the movies do well, he said, “We will probably do some more novels and adapt them.” (Along similar lines, Al told us that his company is readying a new series for TLC called Girl Starter, which he described as “a female-centric Shark Tank in which the winning team gets $100,000 to jump start their business.”)

Like everyone who works with the Hallmark channels he couldn’t say enough about them.  “Hallmark Channel and Hallmark Movies & Mysteries are on fire right now,” he exclaimed.  “They are to me the HBO for Middle America.  They’ve had triple-digit ratings growth.  It makes you wonder … at some point when will some of the other networks take notice of that?  [NBC’s new hit] This Is Us speaks to that.  It's a show I can watch with my 15-year old, my 18-year old, with my wife [ABC News correspondent and anchorperson Deborah Roberts] and my 30-year old, and everybody’s fine.”

Mention of his wife prompted Al to tell us that they had their first date at the very restaurant where we were enjoying lunch.  “Michael’s had been open a couple of years at that point,” he recalled.  “It was already kind of a hot spot and I wanted to impress her. We came here for dinner.”

Such nights out are a bit easier these days, he noted.  “The kids are at least self-sufficient at this point,” he said. “We can go out to dinner and not worry about the house burning down. We’ve even gone overnight and left them by themselves.  The house is still standing.”

Al told us he was as surprised as millions of Today viewers when his colleague Hoda Kotb recently adopted a baby girl.  “We’re relatively close, but I didn’t know that she really wanted to adopt,” he said.  “She kind of intimated that ship had pretty much sailed, but God bless.  It’s wonderful.”

He can relate to becoming a parent somewhat later in life. “I will say that I don’t know if I would have the courage to start now,” he laughed.  “I’m 62.  I was 48 when Nick was born. We have a baby boom going on right now at Today.  You hear them talking about their kids and you kind of miss that a little bit. Then you don’t!

“I’m easily the oldest father in Nick’s class,” he continued.  “Even with Leila … It’s funny, you have a lot of friends that you meet through school, and I’m probably a good 10-12 years older than all of Leila’s friends’ parents.

“In a certain sense the cliché is true,” he said, laughing again.  “It keeps you young.  But it also makes you very tired.”