Lunch at Michael’s with Ben Silverman of Propagate Content 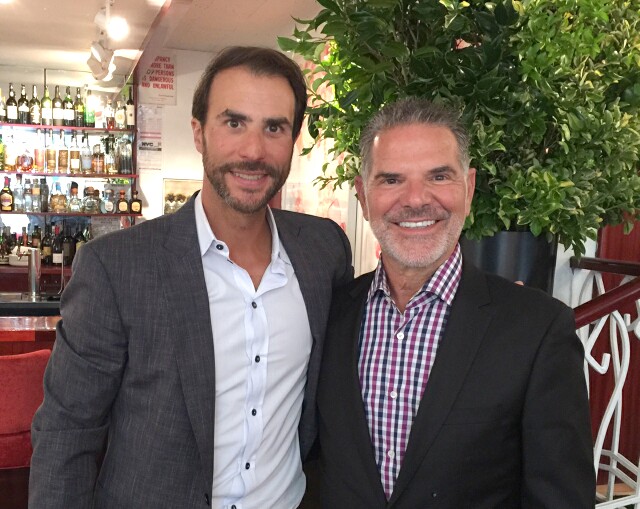 Ben Silverman has been one of the most prolific and successful producers of television series, including NBC’s The Office and The Biggest Loser, ABC’s Ugly Betty, Showtime’s The Tudors, Bravo’s The Restaurant and, at present, Marco Polo on Netflix, Running Wild with Bear Grylls on NBC and Jane the Virginand No Tomorrow on The CW.

Sometimes even a producer and executive as deeply immersed in media as Ben gets a reality check from outside the business. “I took my mom and six of her friends out to dinner on Sunday,” he told Jack Myers and me over a recent lunch at Michael’s restaurant. (Ben, left, and Jack are pictured above.) “They were asking about media. Their main point was, ‘How do we know what’s on? Where do we find it?’ They were asking about everything. Broadcast, cable, Netflix, YouTube. Where to find things. Some of them have just thrown up their hands and said, ‘I’m out. I shut it all off.’ The others are trying to navigate and then they discover different players don’t work with different platforms. It’s frustrating for all of us as consumers.”

The complexity of it all is not lost on Ben. “We’re dealing with divided demographic habits,” he said. “There is a group that’s using traditional linear TV, remote controls, watching on the couch. There’s a group in the middle that’s using Uber and Netflix. There’s a group coming that’s using Snapchat and WhatsApp. Three kinds of demographic segments. They’re more ‘habit segments’ than age-defined. There are a lot of 70 year olds on Facebook and a lot of 20 year olds watching primetime in a traditional way.”

After a brief pause to chat with Hoda Kotb, who was lunching at the next table with her Today co-host Kathie Lee Gifford and was making her way across the room to say hello to CBS Morning News anchor Gayle King, Ben talked at length about his childhood and how he knew from a very young age exactly what he wanted to do with his life.

He grew up on the Upper West Side of Manhattan; specifically, 86th Street and 7th Avenue on Central Park West -- with a “non-park, interior court yard view,” he recalled. “It was great. It was the hood back then. I got mugged. I got robbed. The projects are on 87th and Amsterdam. You literally wouldn’t go north. Out the door you never went left. You only went right. The park was scary. The doormen were my babysitters. I’d have to play just in front. I’d throw the ball against the wall -- that was my playing.

“But I did begin walking to school alone at age four,” he continued. “I knew how to navigate. My parents were divorced when I was four and I had to go to school on my own. My mom [told me] to always go to the doormen if I was scared.”

Ben told us that his mom, Mary Silverman, had been a theater producer and had worked at a company that “made interesting programs for PBS,” but “had to leave theater to pay for my private school.” A career as a “serial cable television executive” followed, taking her from USA Network to Lifetime, Hallmark Channel, Court TV and others. His dad, Stanley Silverman, is an avant-garde chamber music composer, writer and artist, so between the two of them young Ben was “always around the arts and show business.” That combination planted the seed for the career to come, which has included positions at The William Morris Agency, NBC Entertainment and Universal Media Studios and the three companies he founded: Reveille, Electus and currently Propagate Content, at which he is Chairman and Co-CEO (with Howard Owens).

“Being around them I loved entertainment and show business, but also living in New York City I loved business,” Ben explained. That came from knowing the parents of his friends, including future Game of Thrones executive producer David Benioff, whose father Steve Friedman was the Chairman of Goldman Sachs.  And then there was investment banker Herman Sandler, whose company was headquartered in the Twin Towers and “who got murdered on 9/11,” Ben added with momentary intensity.

“Herman was my self-appointed godfather, because I was best friends with his kid,” he said. “I remember going into their closets and seeing rows of shirts with monograms.” That was quite a departure from “my divorcee artist’s home,” he reflected.  “These married people were happy with multiple homes and monogrammed shirts.  I was like, okay, I want in. How do I bridge these two things? I want to be in the business of entertainment.”

After graduating from Columbia Prep, Ben went to Tufts University and had internships every summer at Warner Bros. that his mom helped him get. During spring break of his senior year he told her that he wanted to go to Los Angeles and get into the entertainment business.  “She said, ‘Okay, come to the office, Xerox my Rolodex and start calling people.’ I did that. I started calling.”

Ben made the trip to LA, driving across the country with his best friend from college, and once there stayed with another friend, sleeping on his couch. In a sign that he was fated to work in television, that friend was Don Nelson -- brother of Ozzie, brother-in-law of Harriet, uncle of Ricky and David, together the true first family of American television. Housing proved to be a bit more comfortable than transportation. In LA Ben's first car was “a horrible Honda Accord” with a broken shift and no air-conditioning. “I had to drive with my foot on the gas and the clutch at the same time,” he recalled with a laugh. “I would go to my meetings during the summer and I was sweating so much with what it took to drive this car without it breaking down … I would pull in and they would check my ID and then I would have to get changed in the parking lot. I was driving around in my underwear trying to keep cool, going from one interview to another.”

Even with all of the stress and sweating Ben said he remembers every meeting he went to back at the beginning. “Regardless of the outcome of the meeting I was going to leave with another meeting,” he said. “I still give that advice. Even if I was going to be rejected at the meeting for a possible job in that moment I always left with a referral. ‘You don’t need to say yes, but do you know anyone else who might want to hire me?’”

His first gig was at CBS in International Program Development working for a woman named Marion Davies. “There was a guy named Jonathan Levin, who was running drama development,” Ben recalled. “He liked me, and she tolerated me. He started to bring me into his world more and more and I would sit in on meetings.  I was 21 years old and I was like a pawn between them. He would make me do cooler and cooler stuff, and she would make me type more and more ‘pass’ letters and deal letters. I was a horrible typist. I was sitting outside her office with a row of assistants … before they were called assistants.”

It was “an amazing initial experience,” Ben said, but he knew it wasn’t for him, so he put out word that he was looking for a new job. He ended up working for producer Barbara Corday, then based at Warner Bros.

Corday took Ben with her when she later went to New World, only to be replaced when the legendary Brandon Tartikoff was brought on board. “She told Brandon, ‘I know you’re firing me. I’m just telling you to take care of that kid. You’ll want him near you,’” Ben recalled. “So then I was reporting to Brandon and he was taking care of me. That really launched me into the Hollywood world.”

Ben and his wife Jennifer have two children; a son, Meyer, 5, and a daughter, Madeline, 19 months. “We named Meyer after my gangster granddad,” Ben said with a smile. “I had one granddad named Max and one named Meyer. [When our son was born] I said, ‘We’re naming him after my car-wash owning, bulletproof car-driving, booze-running Grandpa Meyer, who at 6’1 and 300 pounds would break up Nazi bund rallies with baseball bats and teamsters.”

When he isn’t running Propagate Content or spending time with his family, Ben’s interests run toward helping others. “I’m very civic minded, very philanthropic across a number of causes and issues,” he told us. “I love supporting diverse voices; diversity, tolerance, openness [as is evident through his work as executive producer of Jane the Virgin and Ugly Betty and the recent feature film about boxer Roberto Duran, Hands of Stone].

“I’m doing public diplomacy work because we’re losing our global conversation and the obvious ideals of self-determination and opportunity and tolerance and not blowing ourselves up and killing ourselves,” he continued. “I’ve been to the Middle East many times over the past five or six years. I continue to support Jewish causes. I see a lot of anti-Semitism in the world, and anti-everything. I’m Co-Chairman of the Anti-Defamation League Sports and Entertainment Board with Larry Scott, who’s the commissioner of the PAC 12. We’re trying to work with the government in promoting our language and our message.

“It’s all integrated,” Ben concluded. “I always say without The Office or Jane the Virgin and Ugly Betty I don’t have the ability to have the conversations. Your currency is your currency.”