Lunch at Michael’s with Hank Azaria, Star of IFC’s “Brockmire” 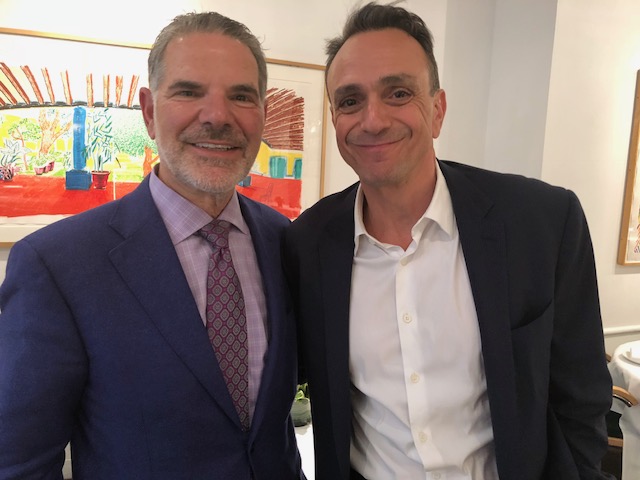 Hank Azaria has several reasons for preferring to live in New York City rather than Los Angeles.  But during a conversation over lunch at Michael’s restaurant one week before the season premiere of his IFC baseball comedy Brockmire, he shared one that hit it out of the park.  “I want to raise a Met fan,” he said with a smile.

He was referring to his eight-year-old son, who is already well on his way to following in his dad’s footsteps as a fan of the Amazins and of baseball in general.  In addition to learning the sport at The Baseball Center on 74th Street, Azaria’s son already knows Citi Field well.  Back in 2015, shortly after Azaria had moved back to New York from the West Coast – a period when, he said, he “had a lot of free time” – he attended approximately 30 games that season, which ended with the Mets in the World Series (for the first time since 1986, when they won).  “My son was with me the whole time, and he got a big kick out of how excited I was,” Azaria recalled.  “Even though that season didn’t end with a World Series win it was pretty special.” 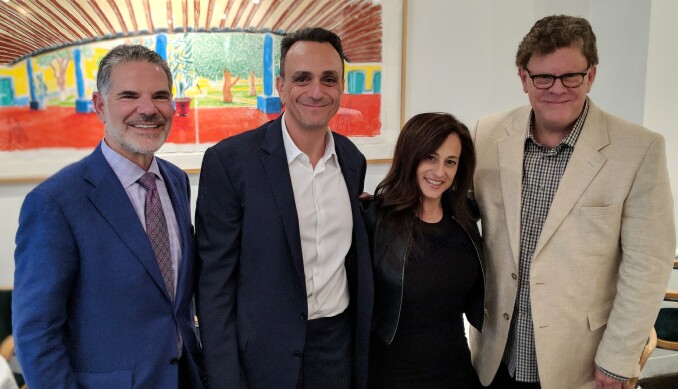 Baseball remained the hot topic on both a professional and personal level throughout the lunch, during which we were joined by IFC President Jennifer Caserta and at one point interrupted by a friend of Sir Derek Jacobi, who was dining at a nearby table and had requested an audience with Azaria, as he is a big fan.  Azaria visited with Jacobi when our lunch ended before dashing off to the Manhattan studio where he records his long-running character voices for The Simpsons.  (Pictured below, left to right: Jack Myers, Hank Azaria, Jennifer Caserta and Ed Martin.)

Brockmire – the character and the series -- was very much on everyone’s minds, as Azaria and Caserta had attended the gala event the night before celebrating the show’s sophomore season, which included a screening and panel discussion at Lincoln Center’s Walter Reade Theater and a blow-out party on the Empire Hotel rooftop.  It was a grand affair, right down to the details, which included life-sized decals of a passed-out Jim Brockmire affixed to the floors in the restrooms (see photo below).  “I didn’t know they were going to do that,” Azaria laughed.  “I went to pee last night and … I 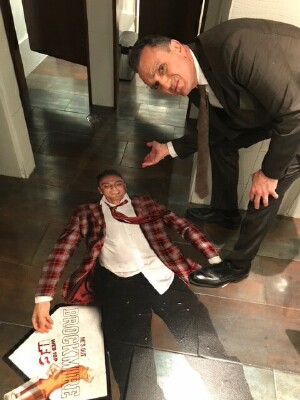 had to take a picture of it for my wife!”

“Last night was the latest I have stayed up in I don’t know how long,” Azaria laughed, noting that he had left the affair at about 10 p.m. for his home on the Upper West Side.  “Ever since my son was born I find that I want to be there, and it’s an early job!  I like to have an hour to myself before he gets up.

“I enjoy nights like that,” he continued.  “I would do more, but because I am a celebrity … not a superstar, just a celebrity … it just turns into taking selfies.  It becomes a public appearance, not a social event.”

Strangely, Jim Brockmire – a former superstar sports announcer on a long-delayed and very rocky road to redemption after a very public fall from grace – might agree.  After being out of the country and the media limelight for ten years, he found himself becoming a reluctant, nationally known podcast star during season one of the show, even though he was only calling games for a minor-league team in Morristown, PA.  Credit for that went to Morristown Frackers owner Jules James (Amanda Peet), who became his drinking companion and lover, and digital media whiz Charles (Tyrel Jackson Williams) who assisted Brockmire in the booth.  That success led to a big-time move to New Orleans for Jim and Charles, where the podcast is making a mint while Brockmire’s comeback collapses (along with his relationship with Jules).

Brockmire is one of the more layered and complicated characters on television right now, which is especially relevant at a time when thousands of characters populate hundreds of scripted series across the broadcast, cable and streaming landscape.  Much of that is due to Azaria’s fearless and fiery portrayal of a man who has gone over the edge and back again (and again, and again, and again).  But Azaria insists that the lion’s share of the credit should go to head writer and showrunner Joel Church-Cooper.

“The character is mine originally, but Joel has written it for years now much better than I could,” Azaria admitted.  Jim Brockmire began as the star of a short video on Funny or Die written by Azaria and friends.  Then Azaria started doing public appearances as Brockmire, including on the NFL Network.  “Rich Eisen wanted me to come on his show as Brockmire and do NFL takes,” Azaria recalled.  “So I called over to Funny or Die and asked if some kid over there could take a pass at writing jokes about the sports topics of the day and I would rewrite them as Brockmire.”  That “kid” turned out to be Church-Cooper.  “In two hours I had this document that was hilarious, way better than I ever could have written it, and I didn’t change a word,” Azaria said.  “It was like a movie pitch.  It was before he really started writing for TV yet.  A 28-year-old guy writing sports jokes.  He has never let us down.

“I’m not a writer.  If I could write scripts I would.  I have tried and I’ve had people say ‘this is terrible’ over and over again,” he added with a laugh.  “We didn’t even say Brockmire should be an alcoholic … we said he should have a fling with the team owner … that was it.  Six weeks later Joel came back with the Jim and Jules relationship.”

Azaria is particularly impressed with Church-Cooper’s ability to write diverse characters.  “Joel is such a woke guy that it means a lot to him to write for people of color, for women … while telling a story in a way that is fun and responsible,” he said.

As is the case with his work on The Simpsons, though, it is all about that voice ... and it seems Brockmire’s has been around for decades.  “I’ve been doing the voice since I was a teenager,” Azaria revealed.  “I always thought the baseball announcer thing was hilarious.  I’ve done it on The Simpsons for years.  They have Harry Shearer doing Vin Scully.  Every once in a while they would put someone in the booth with him.  I called it Baseball Announcer Guy.  And then Harry and I started talking over the years about how baseball announcers are hilarious because they can say whatever they want as long as the give the count.  That became the comedic premise in my brain.”

Azaria grew up in the Forest Hills neighborhood in Queens, New York, in a community he describes as very diverse.  “There were voices everywhere,” he recalled.  “My character in the 1996 Robin Williams comedy The Birdcage was based on the Puerto Rican street queens I grew up listening to.  I was always taking it in.  Forest Hills is exactly halfway between Manhattan and Long Island.  It’s very urban in some ways and very suburban in others.

“You have room to be a kid, be a little more innocent,” he continued.  “There was a serious contingency of tough kids.  Street kids.  There were very wealthy kids.  In New York you’re all thrown together.  Some of the smartest kids were the street kids.  Some of the wildest kids were the rich kids.  We all played together.  We all fought together.  Back in those days, by age 10 you were out of the house having adventures.  I wasn’t a fighter.  I was a good athlete, but the way I made my way in the world was by imitating people.  Being funny.  If I got confronted in the street by tough kids I started talking like, ‘You want sumthin’? Huh?’  It worked.  It helped.”

When he isn’t enjoying baseball or working on his show about baseball (each season of which, he said, takes about 8-9 months from writing to pre-production to production to post-production to promotion), or devoting time to his son or recording segments of The Simpsons, Azaria has been working with a group called The Haven at his alma mater Tufts University.  “It’s a group that helps kids who discover they have substance or drinking problems on campus,” he explained.  “We’re working with Tufts to establish [Havens] in New England.”

He is also working to help establish an extraordinary care facility for Alzheimers patients.  “My mother is 90 years old and lives in Miami … her mother had Alzheimers and passed away at a wonderful senior facility [under the care of] this amazing doctor, Dr. Marcus Ronan.  He’s like the country’s foremost geriatric Alzheimer’s guy.  He is raising a lot of money to start what he calls an empathic care village.  There’s one in Holland.  It goes beyond a nursing home for Alzheimers and dementia patients where they can essentially roam free and the staff is trained in how to deal with them.  It’s a place where they can engage in what interests them.  It is the kind of care you wish was available for any relative who is living with this.  I’m helping him fundraise.  He has a lot of patients dealing with old age issues, not just dementia issues.  His empathic care facility will be right in the middle of Miami.  It’s similar to what I am trying to do with Tufts; create a model.”

Of all the characters Azaria has created, including the animated ones to which he has given many voices, he says Jim Brockmire is his favorite.  “I probably had the most fun doing Spamalot [on Broadway], because I’m a Monty Python freak and Mike Nichols directed it.  The Simpsons is totally iconic.  I was on Friends and Mad About You … but my favorite is Brockmire for so many reasons,” he mused.  “I was on Friends, Mad About You … as someone who has worked in television for 30 years and has been so organically frustrated by the network TV experience, but to watch television turn into cable where you can do Brockmire [is great].  In the past I’ve had many similar ideas be put through the sausage factory and watered down.  I have ultimate respect for people who can actually find a way to be relevant and funny and real through the medium of network television.  It’s an astounding feat to me.”

He turned toward Caserta and smiled.  “I’m not blowing smoke … but IFC was the only place that would do Brockmire,” he said.  “There were others that were interested, but in the end we got ‘no’ everywhere.  We would have to reconceive it and water it down.

“Also, we assumed wherever we went we would be told that Joel would have to be paired with another showrunner, that we can’t trust a guy with his first show,” he continued.  “I was really blown away that IFC let Joel have that opportunity.  We didn’t know he was going to be that brilliant.”

Myers agreed, declaring that Brockmire is a show every baseball fan should watch.

“It should be a rule,” Azaria knowingly replied.