Lunch at Michael’s with IFC President Jennifer Caserta – in “Portlandia”! 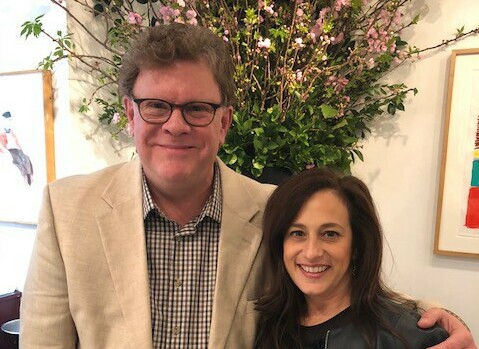 It is not unusual for the president of a network to visit the sets of his or her hottest shows. But it’s rare that such visits involve entering the world of a show altogether. That’s the norm for IFC President Jennifer Caserta, who like all good network presidents loves all of her “children” equally, but finds her trips to Portland, Oregon – where IFC’s signature series “Portlandia” is filmed entirely on location – to be something special. I felt the same way during a recent visit there: To visit Portland is to immerse oneself in the show’s title city. It’s what the locals refer to as “the ‘Portlandia’ effect.”

“My driver yesterday asked what I was in town for, and when I told him he said, ‘Oh, you’re one of those!’” Caserta (pictured with me above after a day on location) said over lunch at Nostrana, a popular Italian restaurant located in the southeast area of the city, not far from the “Portlandia” production offices. “He was actually a big fan. He did say [Portland is] at this tipping point now where there are people who want to keep [the city] the way it was, but that it’s also going in this other direction. He referenced Seattle, and I thought, ‘Wow, you’re blaming our show for that?’” she laughed.

Indeed, everyone I encountered during my trip to Portland -- from people sitting next to me on my flight to drivers to cooks at a couple of the city’s signature food shacks to folks waiting in the ever-present line at Voodoo Doughnuts -- all said the same thing: The “Portlandia” cast and crew is everywhere and everything, having become one with the fabric of the city. Almost everybody is happy to have them around, though they could do without the touristy “effect” – like bookstores referring to themselves as “Booklandia.”

“Any time we have reached out to anyone in this city they have been nothing but welcoming and wonderful, from the bookstores to the tourism board to the mayor’s office,” Caserta said. “The sense I get is that people here so appreciate the way [our show] has put a magnifying glass over the city. I see [series leads] Fred Armisen and Carrie Brownstein get stopped everywhere when I’m here.

“You can’t love and adore the show without loving and adoring what’s happening in the community,” she continued. “It’s got such a positive shine to it, the way people talk about it … as a person who doesn’t live here, it seems like [the show] has greatly benefitted the visibility [of the city]. It’s seen as a place that is interesting and unique and has fun with itself.”

Call it Portland or “Portlandia” – for Caserta the end result is the same. “When I come here I say I’ve got to move here, this is such a great place,” she said with a smile. “So look at me, I’ve fallen right into the trap myself. I want to be here!”

The funky vibe and alt-appeal of Portland is a long way from the highbrow environment of New York City’s Lincoln Center, where as a child Caserta had her first experience at providing entertainment for the public as a dancer in the New York City Ballet. Talk about starting out at the top: She performed in that organization’s world-famous production of “The Nutcracker” every year for four years. She also appeared in the Ballet’s summer performances in Saratoga Springs.

“I was knee deep into it,” she recalled. “I would do my homework backstage during performances.” She appeared in “all of the New York City Ballets that had children’s roles in them. It was a very unconventional adolescence.”

Growing up in Bergen County, New Jersey, a mere 20 miles from Manhattan, placed Caserta in close proximity to the things she loved: dance and television. (In fact, later in her teen years she worked during her summers as an extra on the ABC soap operas “All My Children” and “One Life to Live.” Her sister was a producer on the latter.) She describes herself as having been “obsessed” with television during her youth – a strong interest that extended beyond watching her favorite shows to appreciating the commercials that ran during them and the marketing campaigns that supported them. She even enjoyed learning which “media conglomerates” owned what networks.

“I had parents who allowed me to be obsessed with TV, as long as I was good in school,” Caserta recalled. “I got terrific grades. I was a dancer, a performing artist. I had an interest outside of the home and worked very hard at it, so they allowed me to indulge.”

Translation: Despite her interest in it, she didn’t sit around watching television all day.

Caserta attended the High School of the Performing Arts, where she had a lightbulb moment at a crucial time. While at that school, she “had applied to all of the arts colleges’ programs that would have been necessary to move on and pursue a career in the arts. I was close to graduation in my senior year and decided I never wanted to dance again. Then I thought, now what do I do? I didn’t get into the Tisch School of the Arts. I bombed my audition at NYU terribly. It was devastating. That would have been my safety net. None of the other programs that I applied to or was accepted into really was appropriate for anything other than a serious dance program.”

She then decided to attend Hunter College. “I was going to analyze my life and see if I was going to take dance up again and audition, see if I could make it as a Broadway star in musical theater,” she recalled. Her only other option was to “pursue the only other interest that I had and that I thought I could potentially be good at, and that was the media. I enrolled in every media studies course that I could fit into my schedule and fell in love.” Caserta became a media studies major and “abandoned dance forever.”

Plainly, the media was meant for Caserta, or vice versa. Her first job in the industry was as a marketing manager at the Food Network. A three-year stint working with Gerry Laybourne at Oxygen Media (during pre-launch and its first two years) followed. Then she moved over to Court TV, and then on to IFC as Senior Vice President of Marketing. She left briefly to be General Manager of fuse, then returned to IFC as Executive Vice President of Marketing, Scheduling, Communications and Alternative Programming … eventually moving up to her current role as President.

Caserta lives in Somers, New York, with her husband Anthony Priore and their sons, ages 6 and 10. There is no evidence to date that either boy has inherited his mother’s talent in dance. “Not at all,” Caserta laughed. “In fact, they’re wildly uncoordinated. Then again dancers are, too. Dancers are very clumsy, contrary to what people might think.”

Caserta’s youngest son has severe Autism Spectrum Disorder, which led Caserta to connect with Autism Speaks, the charitable organization founded by former NBC Universal Chairman Bob Wright and his wife Suzanne. She’s on the committee for the organization’s annual New York Chef Gala. “I contribute as much time as I can. For parents like my husband and I they are a great source of compassion and resources. What Bob and Suzanne have done is incredible. I can’t help but thank them every time I see them at one of those events as a parent.”

Getting back to IFC and “Portlandia,” Caserta noted that the success of the show has been a reflection of IFC’s decision back in 2010 to become known as an “alt-comedy” network. (It was at that time that the network transitioned from being commercial free to advertiser supported.) It’s the opposite of what has happened with many basic cable channels in recent years; time and again a network has had a hit series or two that may not have been in line with its initial identity and has shifted its focus and altered its brand simply to maximize the power of said shows.

“How many times do you see networks throw a lot of things out there and something resonates and they go, ‘Okay, that’s what we want to be?’” Caserta asked. “We’re going to be the hip hop channel, the ex-wives channel, the high school girl channel …

“But we said we want to be this, and it all came right in line with the brand. That doesn’t happen all that often.”

Part of the success of IFC in general and “Portlandia” in particular is that they attract people who don’t necessarily watch a lot of television. “[Our audience] is very discerning,” Caserta said. “They don’t watch mindless TV, which is why they like smart comedy. They’re not heavy watchers, but they are drawn to a show or an environment.

“We’ve spoken to our advertisers about it,” she continued. “Despite there being larger networks and a lot of competition, the advertising community has been so welcoming and such fans, rooting for us. They liked the notion of a brand that wasn’t conforming or slouching to the middle and one that was proudly saying we’re embracing what’s different about everybody else.”