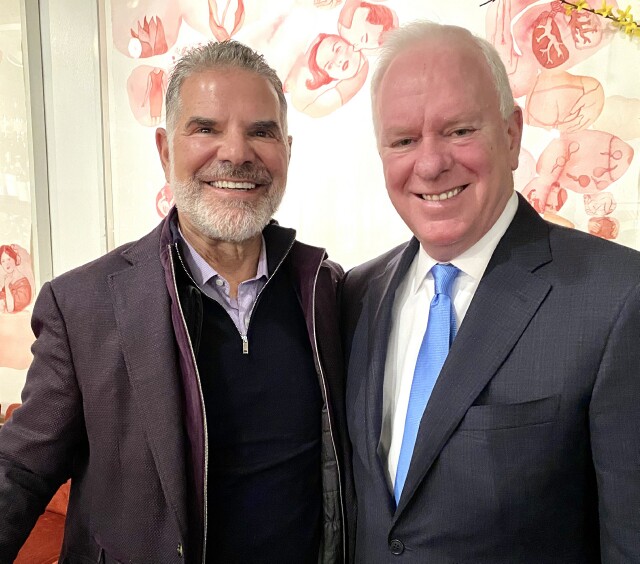 John Lansing launched a successful career spanning more than 30 years in local television two days after graduating from high school.  He then transitioned into the cable arena, where he rose to the position of president of Scripps Networks.  He went on to serve for four years as CEO and director of the U.S. Agency for Global Media (USAGM), effectively reporting at first to Barack Obama and then to Donald Trump.  He is now at the helm of NPR, where as CEO his primary goals are to grow and diversify its audience and continue building what has already become the No. 1 distributor of podcasts in the country and to continue to support and defend the NPR newsroom as they set their sights on investing in more enterprise and investigative reporting.  Over the last few years Lansing has been a vocal advocate for the critical importance of truthful, professional journalism during an era when legitimate journalists are under threat from some of the highest corners of our government.

Not bad for a man who completed his college education just ten years ago.

“I didn’t go to college in the way that most people went,” Lansing (pictured top right) told Jack Myers (top left) and me over a recent meal at Michael’s restaurant.  “I started in television when I was 17.  I graduated from high school on a Saturday in May and I started the next Monday as a studio cameraman at WPSD, the NBC affiliate in Paducah, KY.  It was across the parking lot from my high school.  There was an opening and I applied and got it.  It was minimum wage, $1.65 an hour.”

Later, after accepting a news photographer job at the NBC-affiliate in Louisville, Kentucky, Lansing attended nearby Bellarmine University at night, for six years, but ended his studies a half-year shy of graduating.  He went on to build his career, get married (to his “awesome” wife Jean) and become the father of four children.  As the kids got older, he explained, “I realized that I couldn’t send them to college with the expectation that they would graduate unless I graduated.”  So, he resumed his higher education at Bellarmine at age 53, while he was president of Scripps Networks.

Asked if his classmates hit him up for jobs at Scripps, he answered with a laugh, “Oh yeah.”

Lansing will deliver the commencement at Bellarmine this May.  He said the topic will be along the lines of the war on truth and the importance of objective, down-the-middle journalism today, and also the importance of being a smart consumer of news -- two passions that tie into his decision to move to NPR last fall.

“I feel like NPR is perfectly positioned to continue and grow as a national leader in objective professional journalism at a time when it has never been more important,” he said.  “The power of the system and the 265 member stations combined with NPR’s programming is capable of really filling a need in our country.  The media in the United States right now is so bifurcated along political dimensions, both left and right.  We need to support our democracy through fair professional objective journalism.  It’s very inspiring to me to come to NPR and work with this team.”

His appreciation of the importance of journalism comes in part from years of working on the local level of broadcast television.  The biggest takeaway from decades in that business, he said, was learning “the true value of high-quality, impactful journalism in lifting communities.  I worked at some of the best local TV stations in the country.  WCCO in Minneapolis.  WBBM in Chicago.  WXYZ in Detroit.  It was a lesson in the value of investing in great stories for communities.  It creates a sense of trust between the audience and the TV station.  That trust is really what you represent when you go to advertisers.  They want to be in an environment where they feel safe and the audience trusts the entity.”

One of his primary goals at NPR, Lansing noted, is to unify its member stations into “something stronger and more powerful.”  That ties back to what he learned earlier in his career.  “I’m a local broadcaster at heart,” he said.  “The first 30 years of my career was local broadcasting before I got into national cable, and I believe in the power of localism.  Our member stations make a great impact on their own.  It’s important for us, through them, to reach audiences at a time when there’s not a lot of high-quality, objective commercial journalism for people to rely upon with the decline of local newspapers and the consolidation of local broadcast media.  It’s combining the great work of our local member stations, with our great morning and afternoon news magazines, Morning Edition and All Things Considered, for the stations, as well as other programming that we distribute.  And our hourly newscasts, as well.

“We are losing something in the overall consolidation of commercial local broadcasting,” he continued.  “You lose a lot of the localism when decisions are being made in some central headquarters for dozens if not hundreds of broadcast properties.  Whether those decisions have a political bent or some profit motive, or even just in the sound and product quality of the individual station, it’s losing something when it’s not locally driven.  I think being a TV station general manager was a lot more fun and interesting 20 years ago, when you really were reflecting the community and not having to be responsive to a corporate plan, than it is today.

“I hope that we can harness the power of our individual member stations to create a more impactful collaboration in terms of content.  We’re working with member stations on regional journalism hubs right now to coordinate and expand local and regional reporting and generate content for NPR’s national coverage.  I believe in the power of local stations, obviously.  But I also believe in their independence and their local voice.  The power of our system is that our stations reflect their communities.”

At NPR, Lansing considers his top priority to be finding a way to reach a younger and more diverse audience.  “On radio our audience is aging,” he said.  “It has a median age of 53.  The vast majority is white and heavily male.  Our podcasting has a much younger demographic, in the low 30s, but it’s not very diverse.  Ultimately our success in the business is going to be tied to our ability to reach America where America is.  We are a diverse country.  We need to engineer our efforts in everything we do so that we are able to reach audiences that look like America.  It’s not an either/or.  We love the audience we have.  But we need to enhance this audience for the future of our business.”

During his tenure at USAGM, Lansing worked for two years under President Obama and two years under President Trump.  “USAGM is an independent agency of the federal government,” he explained.  “There are nine board members, all presidentially appointed, and Senate confirmed.  One of them is the Secretary of State.  He’s on the board as an ex officio.  The board was just like any Senate-confirmed presidential appointee.  I reported to the board, but I was essentially a direct report to the president at the end of the day on the non-cabinet level.”

While there Lansing made a few very strong comments about freedom of the press.  “I thought it was really important to set a mark given the environment for the press and given that the highest levels of the government were labelling the press the ‘enemy of the people,’” he recalled.  “I thought that was dangerous.  We saw the rise of authoritarianism around the world in former democracies … Turkey, Hungary, the Philippines, Vietnam, Cambodia.  It was spreading like a virus.  When you consider that (Washington Post reporter) Jamal Khashoggi was murdered in the consulate of a struggling democracy and a NATO ally, you’ve got to say to yourself, ‘What in the world is going on here?’  I thought our response to that as a government was lacking considering he was a journalist for an American newspaper.  I wanted to make a statement, that that was just wrong, and it should remind all of us that our press freedoms are not guaranteed unless we stand up for them and protect them and believe in them.  Nobody else was doing that.  I felt like we had to do that.”

Podcasting plays an increasingly large role in NPR’s success today and in strategies for its future growth.   “It’s evolving right before our eyes,” Lansing said.  “The interesting thing about NPR and podcasting is that we are a non-profit.  But our podcasting business competes in a commercial environment.  So, we’re competing with iHeart and all the major players.  In that part of our business we need to have a little bit more of a commercial mentality about how we produce, marketing support, talent, etc., in order not just to survive or defend but to win and continue to thrive.

“This is an important point,” he added.  “The money we make in podcasting through our sponsorships goes into the content produced for the news department to help grow our news effort for all our member stations and for our journalism across the board.  In terms of our own marketing, we do very little off our own air, because we’re a non-profit with no traditional marketing investment.  We’re going to have to shift to a more commercial strategy to compete in a commercial marketplace.  Our podcasting business is the No. 1 podcasting business in America.  We have eight of the top 20 podcasts, per the Podtrac industry ranker.  I don’t want to just protect that.  I want to grow it.  I’m a brand evangelist.  NPR is one of the greatest brands in America.  I think we can do a much better job of expanding our brand awareness around the country.”

Part of that strategy includes the NPR One app.  “NPR One really represents what could be the future of NPR in that it also unites local and national,” Lansing explained.  “You go to your local station and it shows up on NPR One as your feed of their broadcast.  It’s the digital expression of NPR with a local/national partnership, which is really the Holy Grail.”

As our time together came to an end, Lansing reflected once again on the current crisis in journalism and NPR’s efforts to bring about a change.  “The manipulation of what is true and isn’t true right now has never been worse, at least in my 40 years,” he said.  “Everyone is claiming a monopoly on the truth.   The idea is, if everything is true then nothing is true, and if nothing is true then anything goes.  We’re edging towards that.  That’s why NPR has never been more important, with our programming by our member stations, because we don’t have a political bent.  NPR is essentially a public service and a public trust.  Our bias is toward seeking, finding and reporting the truth.  That’s why I’m here and that’s what we will continue to do.”