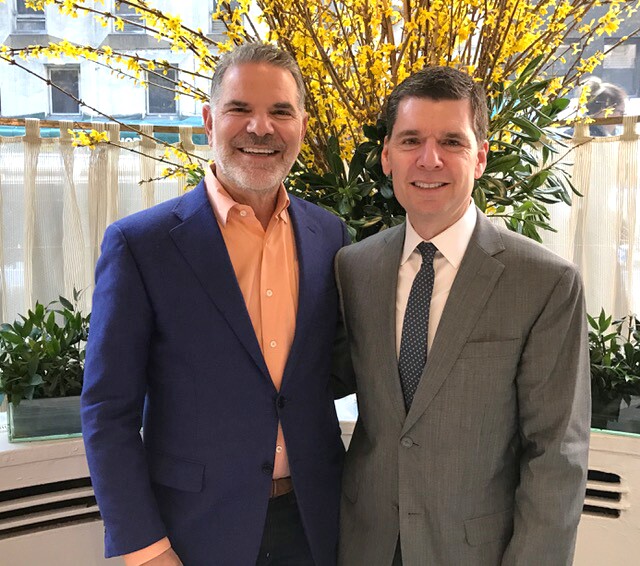 You never know when a chance encounter will set the stage for changes throughout your entire life.  For Burton Jablin, Chief Operating Officer at Scripps Networks Interactive, it happened when he was a student at Harvard in 1982.  Burton, a reporter for the Harvard Crimson newspaper, was asked by the Dean of Faculty what he wanted to do after graduation.  When he responded that he wanted to work in TV news, the dean replied, “You should speak to Frank Stanton,” the legendary former President of CBS who at that time was a consultant for the network.

“He might as well have told me that if I wanted to go into politics I should speak to the president,” Burton laughed during a recent lunch at Michael’s restaurant with Jack Myers and me.  As it happened, Stanton was on the university’s Board of Overseers and came to the Kennedy School of Government a couple of months later for a conference.  Burton (pictured top right with Myers) happened to see him come through a door and took his shot.  To his surprise, Stanton “set down his briefcase, pulled out his appointment book and said, “Meet me tomorrow morning for breakfast at the Faculty Club at 7 a.m.’”  Burton didn’t know it at the time, but he had just taken his first step on the career path that led him to where he is today.

Months later, after hearing back from Stanton, Burton found himself traveling to New York City for an interview with Eric Ober, who was then Vice President of News for CBS’ owned and operated stations. (Many years later Ober would eventually work for Scripps.)  Ober advised him to write to executives at every small TV station around the country.  One of them was Frank Gardner, the news director at WBBM in Chicago, Burton’s home town.

The late Frank Stanton may have started the ball rolling, but Frank Gardner, who is now retired, was “directly or indirectly responsible for the three jobs I’ve had at my career,” Burton said.  Those jobs included positions at WBBM, Fox station KTTV in Los Angeles and ultimately EW Scripps. Scripps Networks Interactive would eventually be spun out of the latter.

Burton started at WBBM as a research assistant for anchorman Walter Jacobson, a celebrity in Chicago.  “To start at that level in the No. 2 market in the country was beyond my dreams,” he said.  “I probably was out of my depth, but I learned really fast.”

During the next two years Burton rose through the ranks at WBBM to become a political field producer, covering the national presidential election in 1984.  “I was very ill equipped to be a field producer,” he admitted.  “I’m a little shy. To just go up and talk to people, that’s hard.”  He then became a producer, working on the overnight shift preparing local five-minute cut-ins for CBS’ national morning news program.  Then it was on to weekend producer, the 5 o’clock news producer and finally the 10 o’clock producer.

After nine years at WBBM Burton decided to take a break and left the station, opting to spend a few months in Colorado visiting his sister.  Enter Frank Gardner once again.  Burton hadn’t seen him in eight years.  “He said, ‘I’m out in LA at the Fox station and I’m putting together a team here.  Would you be interested?  It got me closer to the entertainment industry even though it was still TV news.  I ended up as executive producer of the 10 o’clock news at KTTV, which was a really struggling station back then in the summer of 1991.  It proved to be a baptism of fire.

“I loved living in LA, but it was a very fraught time there,” Burton continued.  “Crime was really high. There was a rash of people being held up at gunpoint when they got money out of ATMs.  There were car-jackings.  The Rodney King trial.  Then the riots.  And before the riots it hadn’t rained in 5 years.  There were terrible floods and mudslides.”

Burton looks back on it as a “momentous period in the news,” – especially the riots, noting that because the station was located in Hollywood “the conflict was raging right around us.”  KTTV was producing live ‘round-the-clock coverage for several days.  “We took shifts to sleep in the basement.  We were there all night.  We couldn’t really get food in.”

And then, one morning amid the madness something extraordinary happened.  “In walked [Fox owner] Rupert Murdoch and his daughter Elisabeth, who was working in programming at the station at the time,” Burton recalled. “Somehow they got in, and they brought a spread of breakfast food and laid it all out.  I just said, ‘Thank you. How did you even get here?’ He said, ‘Don’t worry about that.’  That was the last time I saw him.  It’s a lasting memory.”

“The other person I met then was Barry Diller,” he told us.  “Barry had hired Frank Gardner.  At the time Barry was in charge of the stations division.  He wanted to do a more elevated news cast.  When I got interviewed for the job I had to meet ‘Mr. Diller.’  He was big into motorcycles at the time.  He came on his motorcycle.  He was very gracious. He hired me and then left.  I never saw him again, either.”

By the fall of 1992 Burton was ready to leave KTTV.  “I was done with TV news,” he said.  He spent most of 1993 traveling to such places as New Zealand, Nepal, Europe, Bali and Thailand, and taking driving trips around the U.S.

And then Frank Gardner came calling once again!  “He was at Scripps,” Burton explained.  “We had stayed in touch.  He said that I had to meet this guy Ken Lowe, who had an idea for a TV network about homes and gardens.  I ended up taking the job there, in Knoxville.  At the time I was still living in LA.  I figured I’d stay at Scripps five years, learn something new.  Maybe that would help me get into entertainment programming, which I still wanted to do.  Well, 23 years later I’m still there.”

Another reason Burton stayed in Tennessee is that he met his husband, Barron Patterson.  “We’ve been together for a little over 12 years,” Burton told us. “We got married about a year and a half ago, when it became legal nationally.  It was expressly not legal in Tennessee until then.  Tennessee had a referendum unfortunately [a few years back] and banned gay marriage.”  Barron is a pediatrician at Vanderbilt Children’s Hospital in Nashville, about three hours from Knoxville, where he serves as Vice Chair of Pediatrics and is also an Associate Professor.  “Barron, as we say in the south, bless his heart, spends his days treating sick kids,” Burton said with a smile.

Of necessity the couple maintains homes in both cities.  In true HGTV style they also have a weekend home.  It’s in a rural area outside of Nashville.

“I’ve lived the HGTV life a little bit because we together have built two houses,” Burton laughed.  “We’ve lived the dream and the hassles that sometimes come with it.  Three homes. I’m a person who never thought he would own any homes!”

Living in three different areas of Tennessee has exposed Burton to people on all economic levels.  He is struck by “the contrast between what we see in Nashville, which is a truly vibrant, energetic city, and what we see in rural [areas].  We see why people are so angry.”

Asked if he sees a difference in the way gay couples are accepted in urban centers as opposed to Tennessee, he replied, “I think broadly, culturally, places like New York, Chicago and LA and many other big cities are matter-of-fact about gay couples or gay people in general.  I think the bigger cities of Tennessee are pretty matter-of-fact as well these days.  Certainly Nashville is.  But Tennessee is a fairly conservative state with liberal parts.  My experience over a long period of time has been good; people get to know you as a person and the rest doesn’t seem to matter.  I’ll just accept that and be happy about it.

“Our state did vote to ban gay marriage, and there are still efforts today to create what amount to restrictions on gay, lesbian and transgendered people,” he added.  “The business community in Tennessee for the most part tries to lobby for diversity and inclusion. Hopefully those efforts will prevail.”

Burton said he and Barron are “an unlikely pair” in terms of their backgrounds.  “My husband’s family is from a small town in Alabama.  I’m from a Jewish family in the suburbs of Chicago.  In terms of temperament we’re very well matched.  I go visit his family in Talladega, Alabama and we have a great time.  His family comes and visits us; they love our weekend place.  People there are friendly.  We live our lives.  Knock on wood we’ve had no problems.”

Through conversations with Barron’s students, most of them in their early to mid-20s, Burton is able to gain insights into the changing tastes and priorities of younger generations.  “Ten years ago everything was about Food Network; they were so fascinated that I worked for the company that had Food Network,” he laughed. “But within the last five years or so it has shifted to HGTV.  The guys and the gals, that’s what they want to ask about.  I think the Millennials are beginning to fill up the 25-54 demo, which is our target.  They are getting into that life stage where these things are of interest to them.

“Our median age tends to be in the middle to older range of all cable networks,” he continued.  “When we look at Millennials watching our networks we look at adults 25-34; that will of course change every year, as 34 year olds become 35 … but that Millennial audience has grown for us over the last couple of years.  The reason the median age keeps going up is because the Baby Boomers are such a large group of people, and so many turn 55 every year, that it is hard for us to bring in enough younger viewers.  We just have a math issue.  If you look within the 24-54 demo itself, which is an interesting way to look at stability among our audience, the median age has remained absolutely rock solid.”