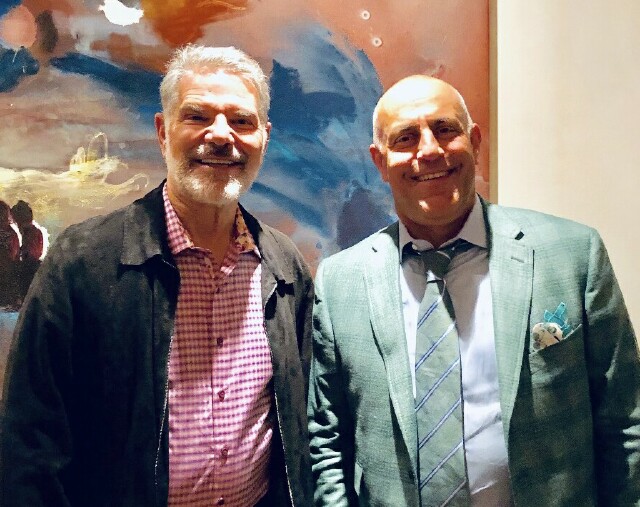 “Broadcast networks aren’t going anywhere,” ICM Partners’ Co-Managing Director Ted Chervin told Jack Myers and me during a recent dinner at Michael’s in Santa Monica.  “They’re different from what they were, but they are still a major opportunity in advertiser supported television.”

The future of television was very much on everyone’s mind during our conversation.  Upfront Week was two weeks away.  The simmering tensions between the Writers Guild of America and the Association of Talent Agents was on the verge of eclipsing the battle between the living and the dead in Game of Thrones.  The industry was still reeling from the many changes at most broadcast networks this year and wondering exactly what their messaging to Madison Avenue would be in the weeks ahead.  But Chervin (pictured top right), co-head of one of the Big Four agencies in the business, seemed unfazed by it all.

“People should stop looking at the landscape in terms of winners and losers and look at it as a landscape with a range of different options and models, all of which can co-exist,” he said.  “Over time there may be winners and losers.  People want to declare winners and losers.  It’s comfortable for them.  But I don’t think that’s really how it’s working.”  The strengths of broadcast today, he said, are “live sports, event programming, big tent reality programming like The Voice, The Bachelor and Dancing with the Stars, and a handful of scripted shows.

“Just because the blend of programming has changed doesn’t mean broadcast is going away,” he continued.  “It’s not.”  There’s premium cable, ad-supported cable and streaming, he noted, “but one doesn’t preclude the other, and they don’t have to cannibalize each other.”

Chervin is clearly as enthusiastic about working in the entertainment industry as he was about his previous career in law.  He takes the challenges seriously and relishes the rewards.  But his passion these days is his family.  He married former professional golfer Anna Rawson six years ago.  Today, they are the proud parents of an 18-month-old daughter and are expecting another daughter in the Fall.

“I lived a colorful, fun life, as a bachelor. But now that I met my wife, got married, and we have a kid with another on the way, I’m so grateful that I didn’t miss out on this,” Chervin reflected.

Chervin, whose parents were divorced when he was two, explained that his childhood and teenage years were not exactly easy, but he did acknowledge that they may have toughened him up for the two highly competitive careers that would define his professional life – federal prosecutor and agent.

He grew up in New Rochelle, New York.  He met his best friend in first grade, and they have remained best friends ever since.  “We were two of the only Jewish kids in the entire school,” he recalled.  It was difficult, but he spoke of those times with great fondness, producing a picture of his fifth-grade class from his wallet and naming almost all of the children in it.

His other sport was ice hockey, which would ultimately change his life in a big way.  “New Rochelle had a pretty good ice hockey team, so I had some structure around that,” Chervin said.  “But I always felt out of place.

“I felt like I couldn’t really be who I really was growing up,” he continued.  “I couldn’t admit my love of reading, my love of learning, because that wasn’t cool.  In my neighborhood it was all about not being seen as soft.”

Nevertheless, he was determined to pursue higher education.  “My mother and stepfather were both well-educated, and their values informed and influenced me. I applied early decision to Duke.  I got rejected fast.  There was nothing special about me.

“My stepfather went to Amherst College,” he said.  “He told me I should apply, that they like legacies.  He went there, I should try.

“Here’s where the ice hockey comes in.  The assistant director of admissions was the hockey coach!  He says, ‘You should come here. You’re a perfect student for us,” Chervin recalled.  “At the interview I got into Amherst College.  I wound up getting amazing grades. I knew I needed to make the most of the opportunity, so I thought, screw hockey, I’m going to work as hard as I possibly can, and study as much as possible. I wound up getting amazing grades, graduating in the top seven in my class, and Phi Beta Kappa.

“I wanted to be a lawyer,” he continued.  “The big win for me was, go to Amherst and then go to law school.  I got into Harvard, Yale, Stanford and Columbia.  I went to Harvard Law School from 1986-88.   At Harvard I had prestigious summer jobs at white shoe law firms in New York and Washington.  But I did not like the work they were doing at law firms.  I did an internship at the Cambridge D.A.’s office. They were doing the fun stuff that lawyers do.  They got to put bad guys in jail.  I got interested in law enforcement and trial law.  There was a guy named Nick Littlefield, Sen. Ted Kennedy’s counsel on the Hill, who taught a trial advocacy workshop.  There was a cross-examination exercise I did really well at. He recommended that I pursue the path of becoming an Assistant U.S. Attorney.  Clerk for a federal judge, and then do a couple years of litigation at a firm, and then apply.

“[Soon-to-be Director of the FBI] Louis Freeh hired me, at age 24, and I became a federal prosecutor, in the Southern District of New York, in Manhattan.  I was in a unit titled Special Narcotics, later renamed Dangerous Drugs and Violent Crimes.  We specialized in non-traditional mob cases and cartel cases.”

Then came what Chervin refers to as his “life pivot,” when despite his success he knew that he had to make a change.  “You would think that I was a great lawyer, but I wasn’t,” he explained.  “I loved interrogating witnesses.  I loved hanging out with the FBI and the DEA.  I loved looking at surveillance reports.  But I didn’t like writing briefs or legal memoranda or letters.  I didn’t like doing legal research or looking at cases.  These were boring to me.  I noticed there were people I was working with who were passionate about all that and good at it.  I thought, ‘Wow, I’m not really that good at this.  I’m good at talking.  I’m good at strategizing.  I’m a competitive guy, a bright enough guy, but I’m not what these guys are -- living and breathing law.  It really humbled me.  It also made me think of doing something else that was better suited to my strengths, that I was more interested in.”

Chervin called a friend from college, who was living in Los Angeles and working as a writer.  He invited Chervin to come stay with him for a week and offered to introduce him to his manager, his agent, his lawyer and a couple of producers that he knew, among others.  “His agent was a guy named Elliot Webb of Broder Kurland Webb,” Chervin recalled.  “He was a major TV packaging agent.  I asked Elliot what an agent does.  When he told me I thought it sounded amazing.  All the fun stuff of being a lawyer without all the technical boring stuff, and with some other creative stuff mixed in.

Chervin worked at “a cubicle in the back,” next to the man who would become his friend and future business partner, Chris Silbermann.  They brought in so many clients it wasn’t long before the company name was changed to Broder, Kurland, Webb, Chervin and Silbermann.  They sold it to a private equity firm, which merged it into ICM.  Chervin became the Head of Worldwide Television, while Silbermann became President.  After five productive but challenging years, when their non-competes were up Chervin and Silbermann told the heads of ICM that they could sell it to them or they would start a company of their own and compete with them.  They got what they wanted.

“Chris and I and several other colleagues were founding partners of the new ICM,” Chervin recalled.  “We renamed it ICM Partners.”  Today, Chervin is Co-Managing Director, and the agency has 19 departments, about 200 agents and 750 employees in four cities -- New York, Los Angeles, London and Washington D.C.”

Asked if there are any projects he was involved with in which he takes particular pride, Chervin didn’t miss a beat.  “Spin City and Scrubs,” he said.  Both series were created and executive produced by Bill Lawrence, who went on to create Cougar Town and Whiskey Cavalier, among others.  “Bill was my first client.  I’m his only agent, ever.  We are such close personal friends it extends way beyond agent and client.  I’m close with him and his wife, all his kids.  He’s very central to my life and career, personally and professionally.

“Long ago he said one of the nicest things,” Chervin continued.  “He said ‘Ted, I don’t know what life has in store for us, but I always want you to be a part of my life.  I would love for you to be [his youngest son] Henry’s godfather because then regardless of what happens in your career or my career we’ll always be connected.'

“That was a sweet, amazing thing for somebody to say,” he concluded.  “Everyone in Hollywood likes to tell you who their friends are, and it’s all bullshit most of the time.  But occasionally you make a real friend.”