Lunch at Michael’s with Van Toffler of Gunpowder & Sky 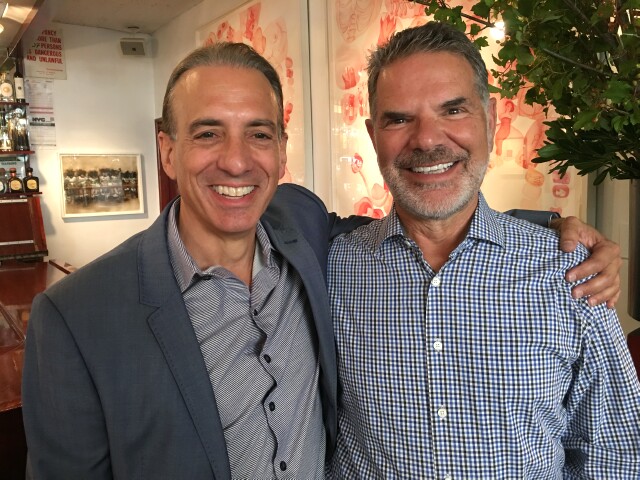 Former CEO of Viacom Media Networks Music Group Van Toffler has a favorite story about a decidedly unusual twosome: Jazz legend Louis Armstrong and President Richard M. Nixon. It’s the kind of story that has informed his new business venture Gunpowder & Sky, a studio dedicated to producing short-form content for Millennials, Generation Z and anyone else with a limited attention span.

“Louis Armstrong met Richard Nixon when he was Vice President, in a Russian airport,” Toffler told Jack Myers and me over a recent lunch at Michael’s restaurant in New York City. “Nixon goes over to Louis and says, ‘Mr. Armstrong, I’m a huge fan. I’m an amateur piano player. I’m not really good but I love your work. You’re a really great artist. If there’s anything I can ever do for you let me know. [Later] they’re landing in the States and Louis goes over to him and says, ‘At my advanced age I have trouble carrying my trumpet case. If you could carry that through customs that would be great.’ Louis was a huge pothead and smuggled his weed [in his trumpet case], so Nixon smuggled Louis’ weed into the States!”

Toffler (pictured top left with Jack Myers) described that story as one of the “great snapshot fables in music that you can tell in three minutes and they’ll be passed around,” which is the driving concept behind his new company. The corporate strategy for Gunpowder & Sky is a perfect blend for Toffler, bringing together his lifelong love of music (which figures heavily in his upcoming plans for the company), his career in cutting edge entertainment and decades in the executive ranks of the network group credited with redefining the parameters of video content.

“It felt like there was a moment to create more premium content that lives on all platforms,” Toffler said of his decision earlier this year to launch Gunpowder & Sky. “You can tell a great story in seven minutes. Music videos were three-four minutes.  They told great stories.

“Think about the attention span of young people,” he continued. “I look at my own attention span. It’s hard for me to sit through entire movies now! Even the movies that I’m going to make for TVOD or SVOD will be episodic. You can watch all 90 minutes or you can watch seven minute episodes.”

Toffler laughed. “Seven minutes may be too long for me!”

One of the great challenges he faces, Toffler told us, is how to rise above the ever-increasing noise of burgeoning content and distribution. The answer, he said, is to distribute his own content. “At a place like Netflix, no piece of content will ever rise above their apparatus and their algorithms,” he explained. “It’s all about the choice. [Gunpowder & Sky] is only four-five months old, and we’ve gone out with three projects and sold them all. The issue is that as a lot of these tech distribution companies amass eyeballs they sell at higher CPMS -- so they need content beyond cats playing the piano. They need people to stay with them for more than three, four, five minutes; [maybe] 10 minutes or 60 minutes.”

Through his partnership with Otter Media – the investment venture between Chernin Group and AT&T – Toffler intends for Gunpowder & Sky to produce content along the lines of five minute talk shows, three minute animated histories of music (like the Armstrong and Nixon “fable” recalled above) and two minute micro-movies for mobile. “That’s the way this stuff is being consumed,” he said.

Everyone wants in on the short-form phenomenon. One of the first buyers of content from Gunpowder & Sky was Spotify, which is getting into the video business, Toffler said. Other media giants in the market for such content, he continued, are Netflix, HBO, Comcast, YouTube Red and many more that are “looking for movies under a certain budget.”

By his own admission, Toffler is a leader in this area. “I’m not talking about films with a $50 million negative cost,” he laughed. “I’m the king of Jackass and Napoleon Dynamite. It’s not like I went to the Oscars every time up.”

Reflecting on the previous few months, Toffler said, “Here’s what we’re learning in our few short months of existence. We have a preponderance of content around sci-fi. It’s difficult to sell all of that stuff a la carte. Sometimes it’s better to package all of that up, sort of like what go90 is doing.  We will probably create off-shoot consumer brands that maybe will become part of a skinny bundle down the road where people pay $3.99 for the content.  But initially we’ll build the brands as consumer-facing around genres. That would be horror, sci-fi, music, animation, comedy.

“We will make an announcement soon about distribution,” he continued. “In our effort to be a genuine 21st-century studio we’re not tethered to a certain platform or format. We’re going to try to get best-in-class distribution around the world that knows how to sell stuff that may be 10 minutes long or movies that are produced for digital first that cost a million and a half. There’s the TVOD window, then the SVOD window, then the global window. Unlike studios that don’t turn the switch on unless it is a transformative franchise this will be a place that sells a bunch of stuff around the world.”

Toffler has been largely defined through the years by his love of music – in fact, prior to joining MTV Networks when he was working as a lawyer, he was famously involved in Michael Jackson’s purchase of ATV, the company that included the Beatles catalogue.

“I remember Paul McCartney and his people thought $40 million was an insane amount of money to pay for that catalogue,” Toffler recalled. “But it wasn’t just the Beatles. There was a lot of stuff in there. Old Buddy Holly stuff. Basically it saved Michael’s estate to get all those songs.  Michael surrounded himself with people who didn’t necessarily question him and say no. But he was a pretty savvy guy. It was a shame to see him deteriorate. Those songs were invaluable.  [The investment] was a good return for Michael and his family.”

Toffler would eventually serve as executive producer of countless music-focused award shows across MTV Networks, including the MTV Video Music Awards and the CMT Music Awards, which over the years have featured hundreds of performances by the top stars of multiple musical genres.

He was quick to identify the VMAs as his favorite of the countless shows he produced while in various capacities at the company -- “about 28 in total,” he said. “I love chaos and I love live television.  Musicians are uncontrollable. They’re not like actors. You can look a musician in the eye and say, ‘I need you to be at this spot in the middle of the song’ and they’ll say ‘Uh-huh’ and then do whatever they want. People would say to me, ‘Why would you keep having Kanye West back?’ I’d say, ‘Because I have no idea what he’s gonna do!’”

Another show from his past that remains top of mind is MTV’s The Real World. “That one happened unintentionally because we couldn’t afford writers and that was just such a wonderful experience. The birth of reality television was because of budget reasons! Someone told us how much writers cost -- and that was the amount we had for the whole show!” he exclaimed.

Not surprisingly, the fondly remembered acoustic music show “Unplugged” was also one of Toffler’s personal favorites. “It really brought out the great craftsmanship around music,” he said.

Interestingly, his life-long interest in and mastery of music did not extend to performing. “[Growing up] I was a horrible musician, but that didn’t stop me,” Toffler laughed. “Oh, and I was a poet, too … and when I put that horrible poetry to music …” Toffler stopped himself before completing that sentence.

He played guitar and piano, and was briefly in a band, but eventually realized the he “didn’t have it.” That didn’t dim his love of music overall. “To this day, I see two live concerts a week,” he told us. “There is nothing as fulfilling to me as the serendipity of live music when it works.”

As for his thoughts about the early years of MTV, when the brand largely ruled the media world, bringing about unprecedented change in both entertainment and advertising, Toffler recalled, “We could have an idea on Tuesday and put it on the air by Friday. Most of the ideas were horrible. But [doing that] made me better and I learned from it. We didn’t get ratings in the beginning. We got quarterly reports. We had no idea if anyone was watching this crap.

“We were fearless, and that is what I’m trying to replicate at my new company,” he continued.  “A small, fearless, creative organization.”

Reflecting on his departure from Viacom after almost 30 years, Toffler mused, “The thing that I noticed when I was leaving is, the road is not littered with fat-cat corporate executives who lived inside a system that have transformed into successful entrepreneurs. Peter Chernin may be one of the few that have done it. It requires a healthy sense of humility, and not thinking that you were ‘the chair.’ The chair was there, and you had a checkbook. It is quite humbling at times when there is someone in the other chair.

“I like to think I was an outsider living inside the system pushing the boundaries,” he concluded. “But I had the tailwind of all those resources -- the brand, the access.  It takes a different mindset to go and push stuff.  For me, we as humans suck at many more things than we’re good at, and if you surround yourself with people who complement your skill set … that’s what Peter did, and David Geffen and Clive Davis and all these guys who jumped around. I talked with them and asked, ‘What did you do?’ That’s part of the secret.”