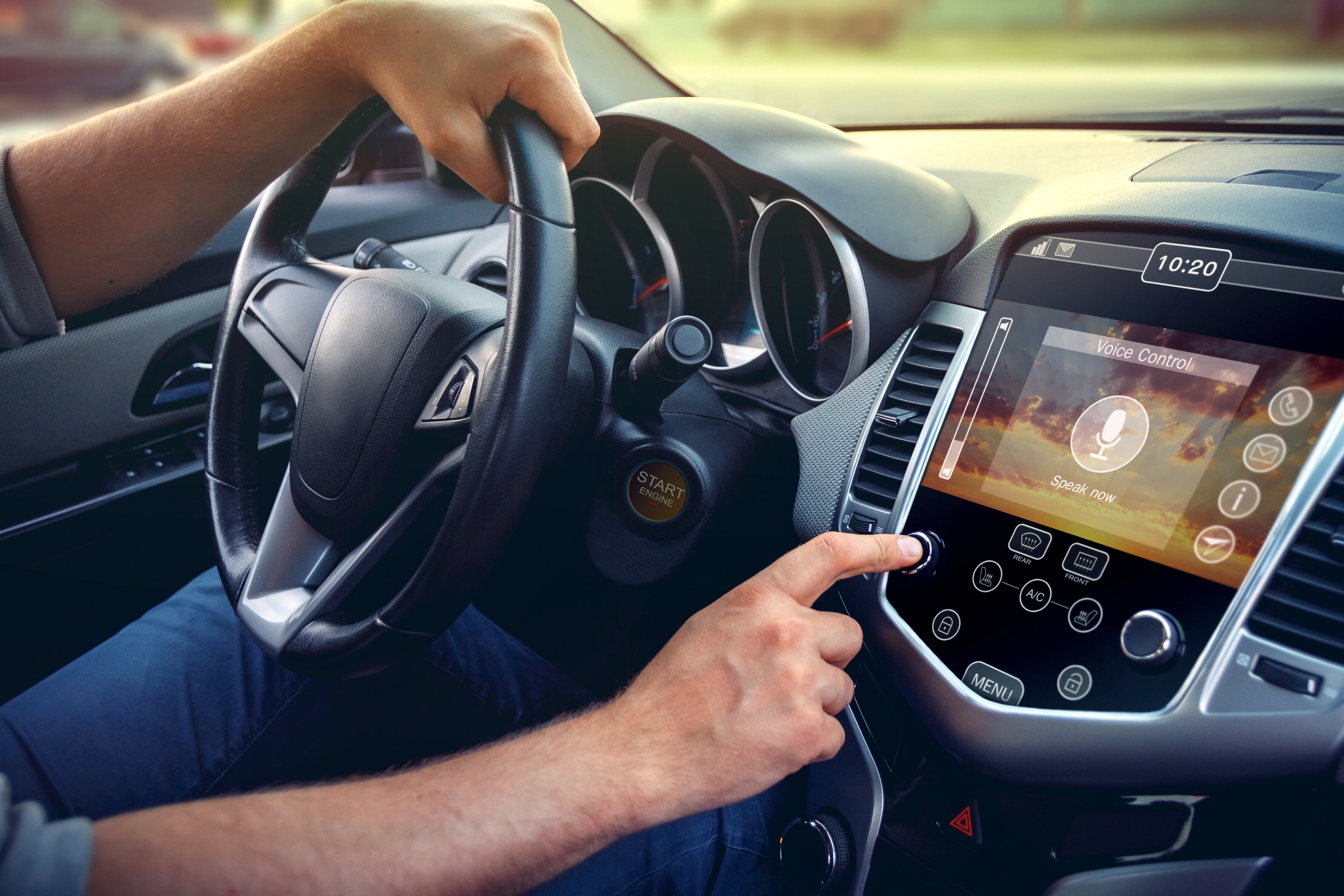 According to Rachel Williamson, regional president, Audacy, the connected car market is expected to reach 76 million units by 2023. "Is the car the new household?" she asks. "It's certainly a very important part of the identity and technology ecosphere."

Audacy, headquartered in Philadelphia, Pennsylvania, was the fourth largest broadcaster until it merged with the former CBS Radio in 2017, creating a media powerhouse with over 230 broadcast stations in 47 markets and monthly listenership of 170 million. The company is now second only to iHeartMedia in size and is the No. 1 creator of original premium audio content.

Formerly known as Entercom, the company on March 30 announced a rebranding as Audacy. "It is time to embrace a new name and brand identity which better reflects who we have become and our vision for the future," said David Field, chairman, president and CEO. At the same time, the company doubled-down on its commitment to the fast-growing podcasting division and has elevated its footprint in the rapidly growing sports betting space, including most recently via a partnership with BetMGM.

Audacy is what you're probably listening to if your local station hosts a sports talk show with all the latest on the state teams. It's the station that's playing a song you love -- forcing you to sit in your car until it's over. Although your infotainment system can play music from your phone, or connect you to Spotify, Sirius XM or their own Audacy app, it also has -- free -- AM and FM radio, and that's where a lot of the listeners are. "Audio reaches 95 percent of Americans on a daily basis," said Dan McKinney, Audacy's vice president of data and analytics. "No other medium is able to do that today."

Broadcast radio has been the soundtrack to our lives for 100 years. Has all that changed because of digital? Hardly. The advent of television led a lot of people to predict that it would kill radio broadcasting. That didn't happen. When satellite and digital radio arrived, they said the same thing. Nope. And streaming audio hasn't killed terrestrial radio, America's No. 1 reach medium, either. Long may it wave.

An Infinite Dial 2021 survey, prepared by Edison Research and Triton Digital, found that AM/FM radio still holds a commanding lead when respondents are asked about audio sources currently ever used in their cars. AM/FM radio is at 75 percent, followed by owned digital music at 48 percent, then -- trailing -- the fast-disappearing CD player, online audio, podcasts and SiriusXM. This does represent a decline -- 81 percent had listened to AM/FM in 2019 and 2020.

"Radio still has massive reach, and everyone has access to it," said McKinney. "We're heavy into talk radio, and believe we have the original social influencers. Studies show that information obtained from audio has the highest level of engagement. It's easy to buy an 'impression' on Facebook, but audio has the most intimate relationship and biggest engagement." 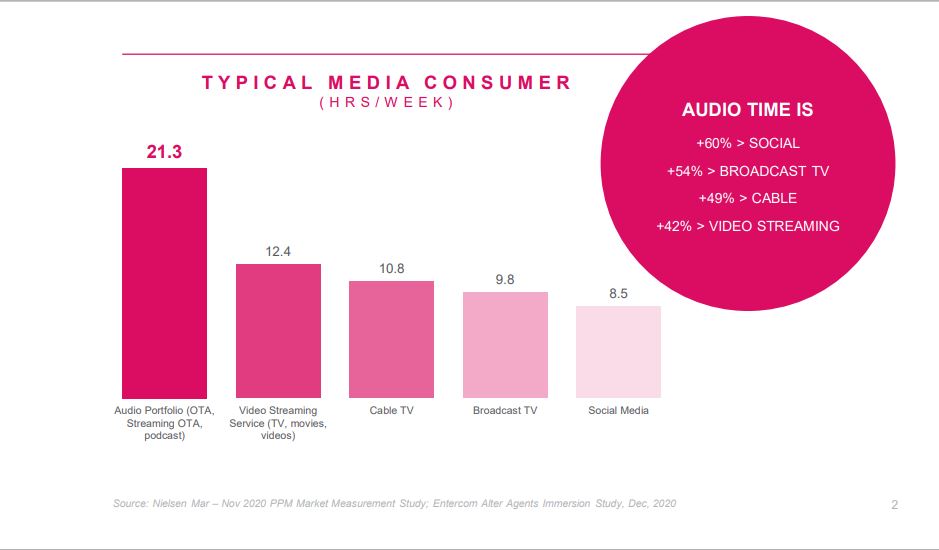 Radio is "broadcasting" in the widest sense of the word; it reaches a mass audience. The challenge is quantifying it and gathering information on its listeners in a way that will satisfy advertisers entranced by digital. Audacy thinks it has found some new ways to do that.

Working with third-party companies, member stations with call-ins, concert tickets or contests are able to harvest the phone numbers and e-mail addresses of their listeners, which the companies can then translate into data points about the audience.

The data is anonymized, so nobody gets their privacy invaded. But advertisers can get statistics about the percentage of the audience that bought a car in the last year or is planning to buy one. They can also get demographics about household income, home ownership and job status. McKinney said that in the Los Angeles area this process has yielded data and listening preferences of approximately 1.7 million listeners, which is far more information-rich than what can be collected from the 2,400 households that existing broadcasting survey companies might use.

Enter the connected car, which had 32 percent of the market in 2020 but will be at 97 percent by 2035, Audacy said. Americans spend about an hour a day in their automobiles, which are increasingly connected in many ways. The software and sensors in cars generate more than 25 gigabytes of information per hour. The future of radio might pepper the broadcast signal with personalized programming and advertising that's driven by data.

According to Audacy, "Opportunities for advertisers go beyond geo-targeted ads or customized coupons based on recent visits to a store. Brands with access to connected car data can use it to create truly personalized content and experiences. This means understanding not only where that consumer drove but using identity resolution to understand who that consumer is."

The upshot is that auto brands can be interactive with radio listeners, including ads that can be connected to voice-activated purchases. Hear an ad for a new show, and it can quickly be downloaded to a user device. A Global Web Index survey shows that 57 percent of respondents want voice command radio.

With the car serving as the new sanctuary, audio listening behind the wheel is increasing. Audacy is working with all the automakers to get them to realize the full value of data-based audience targeting and measurement. The company can identify listeners who were tuned in when a company's ad ran, and soon even the volume level on the radio. If it was a Ford ad, the data can tell if the driver later visited a Ford dealer.

Creative tactics similar to these are also used by the out-of-home (OOH) industry (including billboards), which has an equal challenge in putting data behind the impressions gained by its ads.

You know why printers are so cheap? The companies get to sell you ink for a long, long time. Something similar might happen with the automobile, claims former (2012-2014) Ford global technologist John Ellis in his book Zero Dollar Car. He says that automobiles are in a position to generate Big Data that will be so useful to marketers that they'll give you the car free in exchange for access to that information. It's a nice thought, isn't it?

The car's radio is an integral part of that developing process, as the listeners' choices yield a lot of information about them. Knowledge is power in today's media environment. And about those podcasts. Audacy, through Cadence13 and Pineapple Street Studios, is a top three publisher in the field, with more than 2,500 of them on every possible topic, and more to come.

iHeartMedia and Cumulus, also big radio station owners, are emphasizing podcasting. Audacy complemented its rebranding with the announcement of a new podcasting partnership with Demi Lovato. The star will host her first podcast with Audacy's Cadence13. More details will be released in May.

"We have high expectations for our podcasting business and believe it will be an important driver of future growth, generating significant symbiotic benefits to drive listenership and revenues across our various audio platforms," Field said.

Some 900 of the podcasts are locally oriented, but there are also 350 sports and recreation podcasts, and 100 on news, politics and business. There are 150 million monthly downloads, and 25 million unique listeners worldwide. "It's a huge growth area," McKinney said. "Audio isn't going away; it's going through a re-imagination."

New original podcasts and other projects will air exclusively on Audacy's digital platform, including new shows from WFAN 101.9 FM/660 AM morning show host Boomer Esiason, V-103 morning show host and rapper Big Tigger, and a distribution partnership with The Rich Eisen Show. A revamped Loveline with Dr. Chris Donaghue is set to debut this summer.