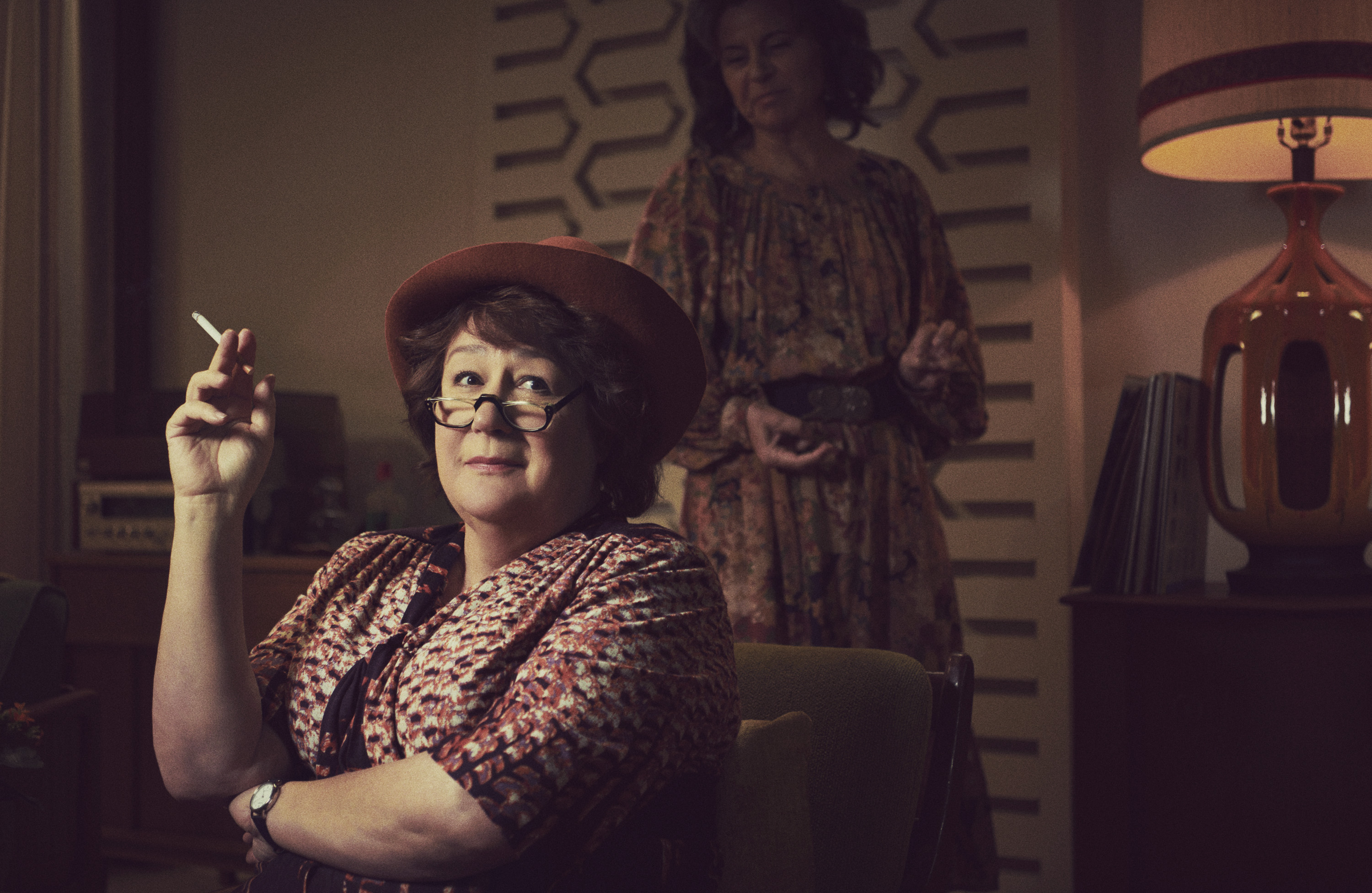 Margo Martindale's magic of making anything she appears in better is no secret. People can't hear her name without blurting, "I love her!" In Mrs. America, FX on Hulu's limited series, Martindale (pictured at top) continues her streak. The nine episodes, devoted to an in-depth examination of the women behind the fight for and against the Equal Rights Amendment, brims with sublime performances. Cate Blanchett as Phyllis Schlafly, Uzo Adaba as Shirley Chisholm, and Tracey Ullman as Betty Friedan are among them. And as Bella Abzug, Martindale shines. No small part of it is how she nailed the voice of Battling Bella, the late New York congresswoman, who relentlessly fought for gay rights, civil rights, and against the Vietnam War.

That voice, that accent, is unadulterated Bronx, which any New Yorker can tell you differs from Queens or Brooklyn accents. Further, Abzug, a first-generation American, had a cadence that carried the rhythms of her immigrant parents' Yiddish. All are enmeshed in this very specific accent. While most people might not have noticed had she done a broad New Yawk accent, Martindale would have known. She worked with three dialect coaches to perfect Bella.

"It is about the time," Martindale says. "It is a very different sound. There's some old stuff you can throw in."

As the series airs its seventh episode "Bella" Wednesday, May 13, Martindale takes center stage. Her first line in this episode proves her hard work: "No one's eating. Is someone sick?" Abzug asks as she puts out a spread including tongue and whitefish salad, which Gloria Steinem (Rose Byrne), and Midge Costanza (Annie Parisse) eschew. Costanza had been Abzug's aide and now works for President Jimmy Carter as a driving force behind the National Women's Conference of 1977.

Martindale, in her native Texan twang, happily chats with MediaVillage about the hard work she put into this role. When we spoke Friday, Martindale acknowledges she saw an early version of this episode but is watching it as it airs. For those who have a little trouble finding Mrs. America, as Martindale notes some of her friends had, she explains that viewers need to subscribe to Hulu to watch.

The limited series spans the 1970s and reveals the history many know but offers new perspectives. Rather than what might be expected, such as presenting Schlafly as some dragon, she's far more nuanced and even – shockingly – a feminist despite that she fought the movement. The anti-ERA leader prided herself on being a wife and mother of six, but one who desperately wanted to hold elected office and use her superior intellect. She frequently left her sister-in-law to mind the kids while a maid and a cook handled household chores. Executive producer and writer Dahvi Waller was determined to show all of the women as complicated, sentient beings, many of whom balanced motherhood and careers.

In a heartbreaking scene, Abzug recounts how as a young attorney, and eight months pregnant, she traveled to Mississippi to represent Willie McGee, a black man accused of raping a white woman. Abzug slept above a brothel because mobs patrolled the hotels, looking for the liberal Jewish lawyer from New York. She lost the case and the baby.

It's a stunning moment in a series made of stunning moments. Martindale lived in the same Upper West Side neighborhood as Abzug. Naturally, the actor knew who the hard-charging woman was.

"Now, I never got to meet her," Martindale says. "I probably missed her, you know, by seconds at different places. I knew that she was the loud, obnoxious woman in a hat. I knew that she made the news all the time. What I learned about her was just a whole world that I didn't know. And she was a remarkable person."

Martindale's portrayal is being noticed. Her pal, Robert Benton, the Oscar-winning director, "said he had never seen anything like this on television," Martindale relays. "He just thought it was divine. He told me, 'You told me all those years that you were from east Texas -- you lied!'"

During the six months Mrs. Americawas shot, Martindale and her co-stars became close and have remained in touch. "I'm watching as they come out, then I call the girls," Martindale says. "We talk all the time, usually as each episode comes out. I call and tell them what I think, all praise, of course."

The three-time Emmy winner -- twice for The Americansand once for Justified -- both FX shows, would not hazard a prediction on awards for this, other than the series should be nominated. While making this, Martindale learned the ERA had not been ratified.

Working on the limited series also taught her, "how on fire the women of that period were, the libbers, they were more fierce and more passionate and more bold than anything I have seen. And if you go back and watch those documentaries, and things of that period, they were more outspoken, more vocal, more demanding. It was something we might have lost a bit of."

"It makes me want to be more involved," she says. "It really does. I have never been political. I am thinking a lot."