Mariah Carey Has It Her Way at TCA 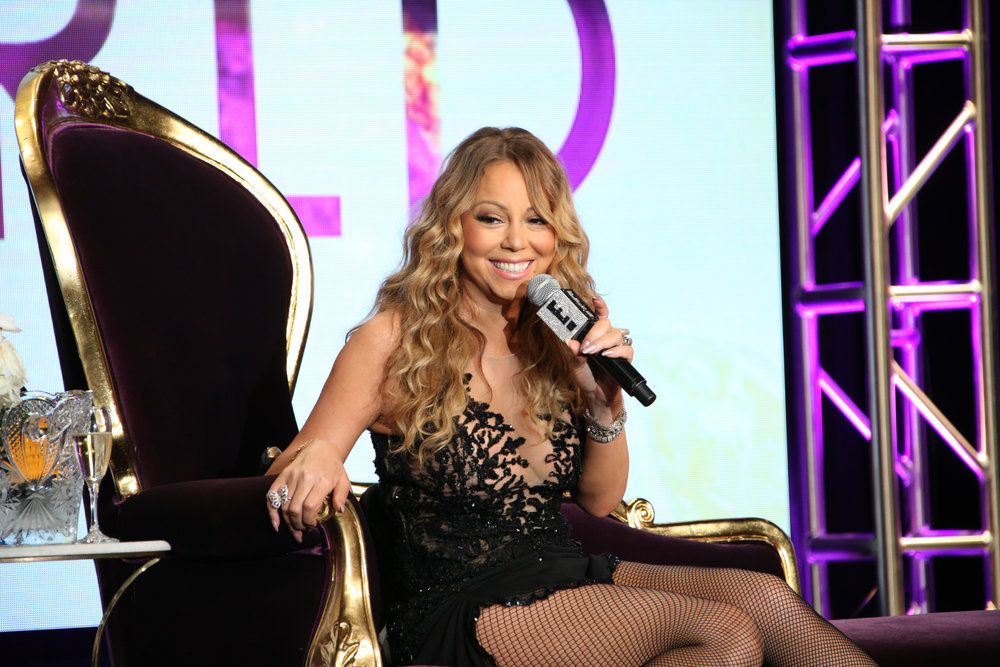 Beverly Hills, CA – Every TCA tour has a “moment” or two – from the appearance of a true superstar, to a spectacular event of some kind, to a press conference that goes way beyond the norm. Yesterday at the Summer 2016 Television Critics Association tour E! produced an unforgettable experience that combined all three and will be talked about for years to come – a fully immersive session with Mariah Carey, on hand to promote her upcoming observational reality series for the network, “Mariah’s World.”

It wasn’t Carey’s first time at this rodeo – she was here a few years back with Keith Urban, Randy Jackson, Ryan Seacrest and Nicki Minaj to talk about the notorious season of American Idol during which she served as a judge, before the notorious part kicked in. And last summer she breezed in and out of a Hallmark Channel party to call attention to the first movie she directed, Hallmark’s A Christmas Melody. But it may have been the first time she embraced her inner-diva in so winning a way, at least for the press. (“Inner” may be the wrong term, as I cannot after yesterday imagine Carey ever bottling up her personality and keeping it locked up inside her.)

The experience began almost a half-hour before she appeared, when staff from the Beverly Hilton, site of this year’s summer tour, began distributing champagne glasses to the hundreds of journalists gathered in the International Ballroom. Bottles of Veuve Clicquot followed, along with boxes of Compartes Chocolates for all (each treat inside exclusively decorated on top with the words Mariah’s World and E! News). Meanwhile, a plush oversized chaise lounge appeared on the stage, along with a small table with a bouquet of fresh white roses on top. Then the stage was bathed in a light that I thought was purple before I was corrected: It was pink, accented with a lavender hue. (It looked purple to me.)

Moments later, six shirtless, oiled hunks strolled onto the stage to strut and pose before the crowd. And then she appeared from behind the curtain, seductively attired, and made her way across the stage as the men assumed various positions and formed a man-couch, on which Carey perched to begin addressing the crowd. 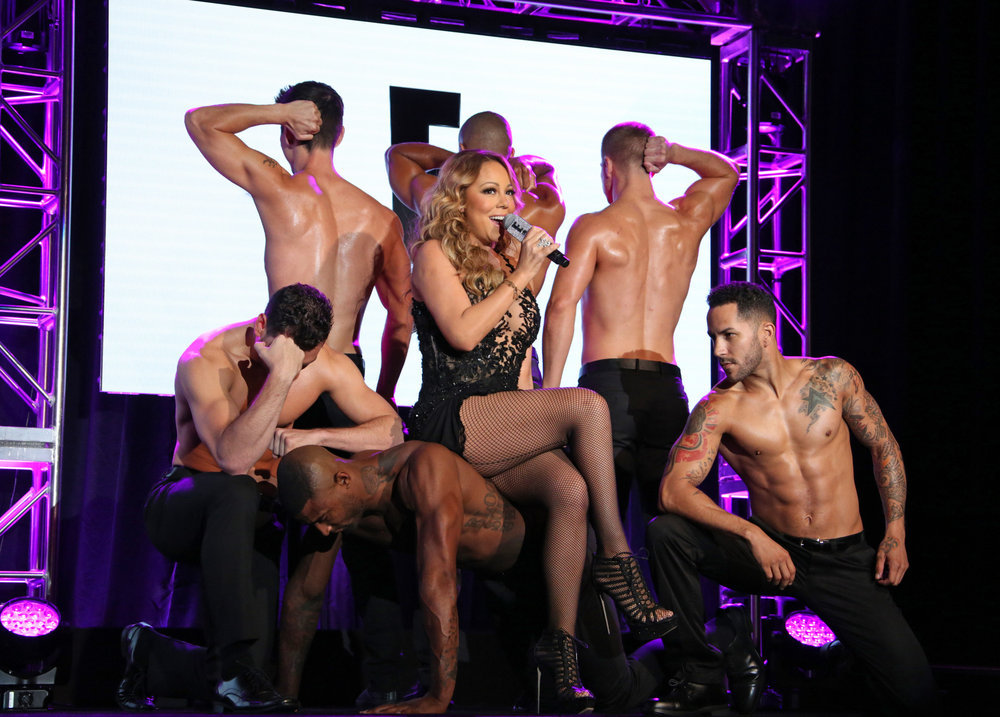 And just like that, Mariah’s World assumed a prime position on the scheduling radar of everyone in the room.

Before long Carey made her way over to the chaise while the six hunks headed out into the audience, microphones in hand, and the proper press conference began. Throughout, and to the surprise of many, she was a cooperative delight.

Her first order of business was to enjoy a “splash” of champagne.  “I want to share a splash with you guys,” she purred. “I heard you had, kind of, like, a fun day, but it was not necessarily splashes and shirtless, hot guys. Was it?” The audience laughed, and Carey continued. “You know your cues! Fabulous! Okay. Cheers, darlings! Cheers!” 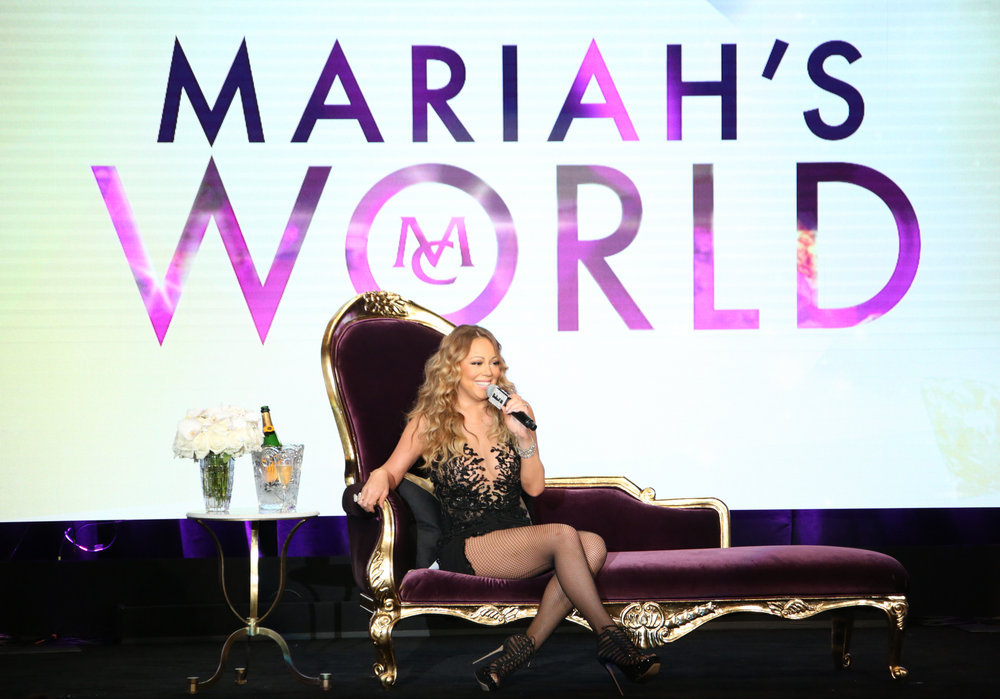 Asked why she decided to take on a reality show, Carey replied, “First of all, I don’t consider it reality, but, like, my life has always been (a circus) I wanted to document. We are going on tour, and I haven’t been on tour in Europe in at least, like, ten years -- when I was ten -- and so I figured, let’s go. I was, like, let’s just show the behind the scenes, what it really takes to do a tour, what it really takes for all these people to, kind of, get together and work together and become a family and mainly, you know, watch how the music evolves, watch the process, and watch how the different personalities interact. But it’s also my life, and I figured, if I don’t document this right now, I’m not sure when I’m going to go on tour again. I’m not sure what I’m going to do. So the reason why we call it more a docuseries is because it feels like a documentary.  There’s no way I was, like, “Ooh, let’s do some kind of reality thing.”  I don’t even watch reality. I don’t even know what reality is, literally, in terms of, like, real or not real.”

One critic wanted to know if ex-husband Nick Cannon, with whom Carey has two children, will be on the show and what he thinks of it.

“I can’t speak for what he thinks because he’s his own guy and we are not together anymore,” Carey said. “But he’s cool about being on the show and coming around with the kids and he’s very supportive.”

“So he will be on the show?” the critic pressed.

“Well, I didn’t say that, darling. I said he came around. I don’t know what makes the final cut,” Carey replied, to generous laughter.

There was even more laughter when another critic asked about her experience on American Idol and what she learned from participating in that show.

“Oh, it was the most abusive experience!” she declared, reaching for her champagne. “By the way, you’ve just driven me to drink.”

After toasting the audience once again with a flirty “cheers,” Carey said, “I need a festive moment, you guys. I’m going to have to get a touch up in a minute, too. So I’m just going to bring them out onstage if nobody cares.” Seconds later her makeup artist appeared and got down to business. “This is Kris Buckle, and he’s one of my favorite people, and Andy Lecompte. They are just here because they knew I was, like, ‘You guys, if I feel like I need a touch up, I’m just going to call you. I hope you don’t mind.’ This is part of my world.

“Anybody else want a touch up?” she asked the critics. “It’s very expensive!”

Asked if there are any female musical artists that she thinks is really killing it in the music industry at the at the moment, Carey said, “There’s a few.” But when asked to name names, she replied, “They would be lovely ladies, but it’s not their day!” More thunderous laughter and applause followed.

The session flew by, ending with Carey briefly drowning in a sea of eager reporters who rushed the stage. And then she was gone.

Wisely E! took advantage of the high energy and interest in the network generated by Carey’s appearance and followed the session with a lavish cocktail party at the hotel pool, to promote its new souped-up entertainment news studio and programming. Carey wasn’t there, but her hunks were (they are dancers from her Las Vegas show), along with two doctors from Botched by Nature who had appeared in a session immediately before Carey, as well as personalities and producers from E! News. The network’s catchy new tag line, “Be Pop Cultured,” was spelled out in  floating yellow letters in the water.

Photos courtesy of E! The opinions and points of view expressed in this commentary are exclusively the views of the author and do not necessarily represent the views of MediaVillage.com/MyersBizNet, Inc. management or associated bloggers.