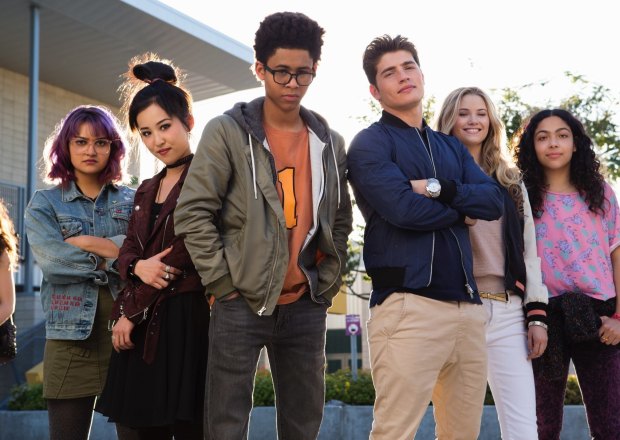 In 2017, Hulu successfully entered the ever-expanding Marvel Cinematic Universe with Runaways, a Marvel comic-book-based teen drama developed by two titans of the genre, Gossip Girl’s Josh Schwartz and Stephanie Savage.  Season one began with the simultaneous release of the first three episodes, followed by one new episode per week for the rest of its freshman run.  In a change of pace for Hulu, the sophomore season of Runaways premiered in its entirety on December 21 2018.  In addition to its casting diversity and tackling topics like LGBTQ+ relationships, father-son relationships and breaking social norms and heteronormative standards, season two raises the stakes with more fast-paced action, improved special effects and higher production values.

To quickly recap season one, the Runaways, a group of six friends, discovered that their parents were under the oversight of a mysterious man known as Jonah (Julian McMahon) running a deadly criminal organization under the veil of their philanthropic charity known as Pride.  Determined to expose their crimes and their phony charity organization, the kids united to take them down.  By the end of the first season, the villainous parents framed them for murder and the six were forced into hiding, finally earning the name "Runaways."  Season two picks up right where season one left off, with the Runaways on the lam from law enforcement and looking to regroup and figure out their next move to take down Pride.

The Runaways consist of Chase Stein (Gregg Sulkin), an engineering expert and tinkerer; Alex Wilder (Rhenzy Feliz), a tech-savvy nerd who handles the group’s defenses; Gert Yorkes (Ariela Barer), who has a telepathic connection to their parents' genetically engineered dinosaur Old Lace; Molly Hernandez (Allegra Acosta), the youngest of the group, and Gert’s younger adopted sister who can channel tremendous strength; Nico Minoru (Lyrica Ocano), a Wiccan who wields a staff that can summon dark magic, and Karolina Dean (Virginia Gardner), a half-human, half-alien with the power of flight and the ability to project beams of light.

Due to the large cast, with six Runaways and ten members of Pride, it does take some time for the plot to move along as each character is given his or her moment in the spotlight, but the showrunners and writers have been careful to leave no weak link among their burgeoing gallery of heroes and villains.  The series meticulously delves into the backstories of not just the Runaways, but of their parents as well, layering each character and fleshing out their relationships with each other and their families, as well as revealing their inner demons.

One of the many interwoven stories here explores the dynamic between parent and child, particularly between father and son.  Victor Stein (James Marsters) and his son Chase have never had a pleasant relationship, but when Victor tells Chase about his brain cancer, the two decide to mend things for the sake of Victor’s well-being during the limited time he has left.  Chase’s change of heart toward his father and Pride causes rifts in the group, particularly with Alex, who used to idolize his mother and father (played by Angel Parker and Ryan Sands, respectively).  But when he and his teammates uncovered their parents' deadly secret, he was shattered and now wants nothing more than to see them pay for their crimes.

Meanwhile, Victor’s emotionally abusive relationship with his wife Janet led to her affair with Nico’s father Robert (James Yaegashi).  Although she was reduced to the role the picturesque PTA mom and housewife due to Victor’s career, she is a brilliant scientist who will protect her son by any means necessary, even from his own father.

On The Marvel After Show, the official companion podcast featuring interviews from the cast and creative team of Runaways, Marsters spoke about his character's anger and hostility and how it has affected Victor’s relationships with Chase and Janet.   “Victor did not have a perfect childhood," he said.  "He’s had a lot of that anger his whole life.  I think that anger has served him well in his life as an engineer and industrialist ... and he’s fully convinced that it works and that it’s the best thing to do,” he said.  “His brain cancer is the last straw.  [He's] been trying to juggle all of this.  [He's] been trying to make this horrible situation work and now [he] can’t even think straight and [he's] just drowning.  [He doesn't] know what to do anymore.”

"Chase loves his dad very much and loves his family, but at the same time he’s not an idiot and knows that his parents are not who he once thought they were," said Sulkin on the podcast.  "They’re not superheroes or super parents; if anything they’re supervillains.  The main crack in his armor is when his dad reveals his health issues to him because you can dislike someone and have all this pent up anger, but if someone tells you they’re not going to be around much longer, you soon change your tune.”

While many of the actors playing the Runaways give fantastic performances, those playing the members of Pride tend to be the scene-stealers.  Two particular standouts are James Yaegashi and Brittany Ishibashi as Nico's parents, Robert and Tina Minoru, respectively.  Yaegashi portrays Robert as a tranquil, tender and loving father and husband with a sense of vulnerability that many can find relatable, especially when men in media are not often portrayed as emotional or sensitive.  He shows several acts of bravery and strength in character throughout the series, and is willing to sacrifice himself for those he loves without hesitation.  Ishibashi plays the stoic and intimidating, staff-wielding Tina to great effect.  She is by far the most powerful member of Pride and probably the most feared among the group, other than Jonah.

During the first season, Nico witnesses her mother "crack" for the first time in a heart-wrenching moment after Robert and Janet’s affair is exposed.  Ishibashi was impressive showing the sudden shift in her otherwise strong-willed and fearless character.  On The Marvel After Show Ishibashi spoke about her character’s relationship with Robert and Nico and the obstacles the Minoru family has to overcome.  “As with all the parents, we’ve been doing all of this for our families, and to save our families, and just to survive.  I don’t think we realized how far in over our heads we were.  Everything Tina has done has been to save her family.  She's almost lost everybody.  She’s trying to get back to the essence of what she’s doing it all for, and that family is the most important thing.  It was fun to work with James, to talk about what brought Robert and Tina together in the first place and building this business together and climbing this mountain together.  We get some really intimate, wonderful, quiet scenes in season two after Robert goes on his mission to do what is noble and try to stand up and protect his family in his  own way.”

Yaegashi, along with Angel Parker and Kevin Weisman, who plays Gert and Molly’s father Dale, bring an especially interesting perspective to their characters as real parents.  When asked about the climactic fight between Robert and Tina against Nico, Yaegashi said, “You can’t forget the fact that Robert has actually been trying to bring Nico back and give her the option ... at every turn she’s rejected that.  It’s a parental thing, too.  How much freedom do you give your child who maybe isn’t 100% ready to take on everything in the world as an adult?  I’m going through that with my own 15-year-old.  It’s a delicate dance because you want them to be independent.  You want them to make their own decisions.  But there are certain decisions that if they make (the wrong one) it will expose them to more danger and be more detrimental than they can handle.  At a certain point, a parent has to put their foot down.”

Season two of Runaways raises the stakes in action scenes, visual effects and overall production value, finding its footing in a fantastic balance of teen drama and superhero blockbuster.  Though it takes place in the same world as otherworldly heroes like hammer-wielding gods and super soldiers, the tone of the show is still very real and grounded.  Something I have to commend Marvel’s Runaways on is how the writers have broken the gender norms typically portrayed in film and television.  The men are smart, sensitive and unafraid to be vulnerable.  The women are strong, driven and simply put, badasses.

The budding romance between Chase, who was at one point the alpha jock in school, and Gert, a determined feminist and social justice warrior, creates an interesting dynamic.  He shows a more sensitive side, is willing to listen and not man-splain everything.  Instead, he offers a helping hand or comforting words when Gert is ailing or having a panic attack due to her anxiety.  What’s impressive about Gert’s character is that amidst her stress, her relationship problems and her struggles with Molly, she still gets the job done.  She works with the group as a total team player, showing that people suffering from a mental illness are not helpless and can still be strong.

Runaways is a massive step forward for under-represented communities with actors of Asian, Latinx and African-American descent in leading roles and LGBTQ+ individuals as primary characters.  Not only is it important for young audiences to see themselves represented onscreen, to have a superhero that looks like them, talks like them and acts like them is truly impactful.

Seasons one and two of Marvel’s Runaways are now available to stream on Hulu.