Mary-Margaret Humes: From "Dawson's Creek" to Hallmark (and Back?) 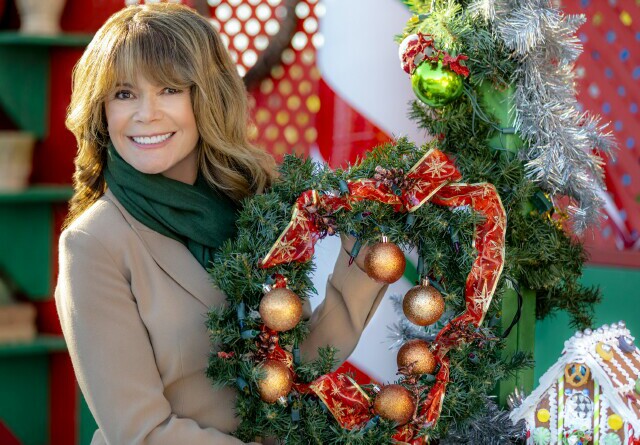 As a 10-year-old, actress Mary-Margaret Humes would sell homemade Christmas wreaths in her neighborhood to raise money to buy holiday presents.  It's a talent the ever-youthful actress found handy while filming her latest Hallmark project, Christmas in Love, premiering Sunday as a part of the network’s Countdown to Christmas programming event.  In the movie Humes, best known as the title character’s mom in the teen-angst classic Dawson’s Creek, plays Grace Hartman, a gift shop owner in picturesque White Deer, Missouri, whose husband Richard (David Keeley) and daughter Ellie (Brooke D’Orsay) are integral parts of the local Carlingson Bakery -- famous for its Christmas Kringle pastries.

Unsatisfied with her administrative position at the bakery, Ellie takes a leap of faith, following her true passion for crafting by deciding to sell her Christmas wreaths at a stall in the town's upcoming Christmas Festival.  With her inventory yet to be created, the bakery receives notice that company CEO Nick Carlingson (Daniel Lissing) will be visiting to experience its operation first-hand.  No one knows Nick wants to automate the bakery (at the cost of many local jobs), and after a forming a friendship with Ellie he decides to help her build the wreaths she needs for her new undertaking.  Ellie, of course, develops feelings for Nick, until she learns of the corporate agenda that brought him to town.

Humes was happy to lend a guiding hand on set to make the wreaths, but insists her on-screen daughter needed little guidance.  "I really didn't give Brooke any advice on making the wreaths," she laughed in an exclusive sit-down with MediaVillage.  "She actually created all of them on her own.  They were very elaborate and absolutely stunning.”  (Humes is pictured at top and below, left, opposite D'Orsay.) 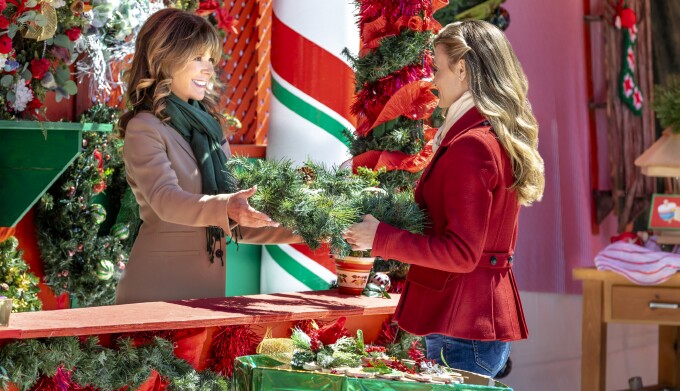 For Humes, there were many reasons to embark on her most recent Hallmark project.  "The script itself was very endearing,” she explained.  “If [automation] were to happen to a place I loved, I would be torn.  This is a family owned and operated bakery that employs many people who depend on it for their livelihood and Daniel's character wants to replace people with machines?  Brooke’s character is all about family, so these two are like oil and water.  Daniel’s character has to learn family values, while Brooke needs to take a leap of faith and go into business for herself.

“I’d seen Brooke’s work and she has a sparkle and is a bubble of enthusiasm,” she continued.  “Daniel is so charming, and I got to go to this wonderful place called North Bay in Ontario, Canada, so that was a new experience.  I was so excited to be going there."

Despite amassing a multitude of credits over her extensive career, she’s still Gail Leery to legions of Dawson’s Creek fans.  It’s something her young Hallmark co-stars (many of whom grew up watching that show) often call her out for.  “I do get, ‘You played Dawson's mom!  And now you're playing my mom!’" she laughed.  “To me, that's just wonderful.  I felt very privileged to be a part of Dawson's Creek.”

Christmas in Love was no exception.  “A few days into shooting, Brooke shared a story about me, which to me made all the difference in the world,” she recalled. “She [explained] that in an episode of Dawson's Creek I was giving advice to Katie Holmes' character [Joey] and she'd always remembered what I said.

“[Being] sequestered in Wilmington, North Carolina, out of the limelight, the [Dawson’s] kids had no idea what Hollywood glitz was,” she continued.  “We had no texting or internet and cell phones were fairly new, so we 'd sit down, look at each other and have conversations.  To me, that’s one of the most special things about my Dawson's Creek experience.  I think people crave that now.”

Hollywood glitz was something Humes was well versed in while shooting Dawson’s.  Early in her career Mel Brooks saw something special in her and cast her in his 1981 classic History of the World: Part 1.  She also almost became a glamorous TV crime-fighter, too.  "I did a Charlie's Angels spin-off pilot produced by Aaron Spelling called Velvet back in 1982,” she told me.  “I played an aerobic instructor by day and government agent by night.  It was basically the same concept, but I'm kind of glad it didn't make it."

Humes said she’s still in contact with many of her Dawson's cast mates, recently catching-up with TV son James Van Der Beek.  She sees former TV husband John Wesley Shipp, whom she calls "a kindred spirit," once a month and is planning a little "secret destination" get-away with Katie Holmes for a weekend to catch-up.

She's also not ruling out that rumored Dawson's reboot telling me.  "Never say never,” she teased.  “If there are talks, they're bound by secrecy and I'm bound to secrecy."  However, before any possible return to Capeside, Humes has a full plate of projects to complete.  She has a Hallmark Valentine's day movie to shoot and a couch to visit as Hallmark’s Countdown to Christmas continues.  "I love being a part of the Hallmark tradition and curling up on the couch under a blanket as a family to watch these movies," she smiled.  "Who wouldn’t want to be? There are smiles all around and there is always a happy ending."

Christmas in Lovewill be telecast Sunday, November 11 at 8 p.m. on Hallmark Channel as part of the network’s Countdown to Christmas event.