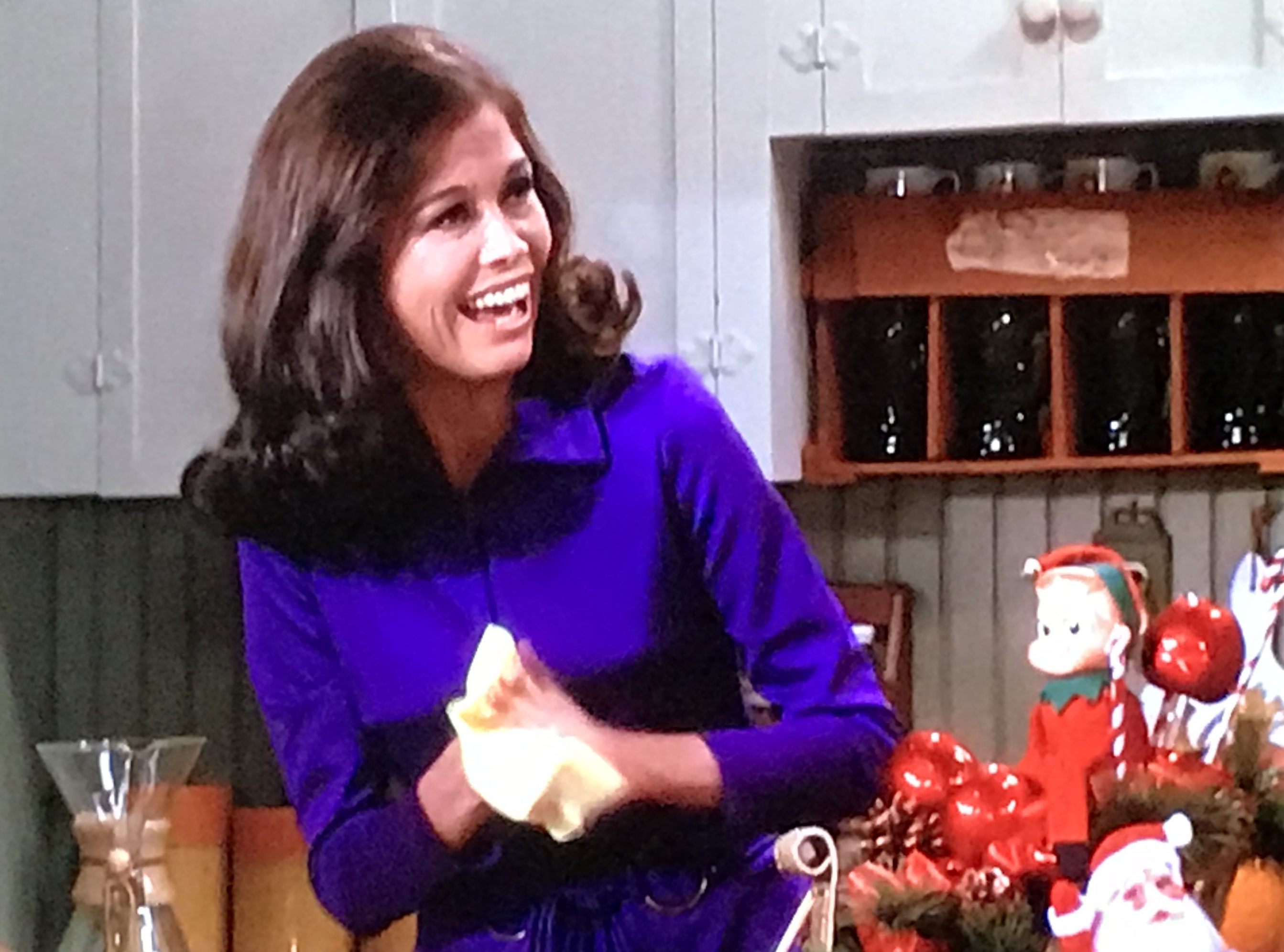 As Women's History Month continues, there's no better time to celebrate the women in television who advanced others on-screen, behind the scenes, or both -- at a time when women weren’t exactly welcome to do so. Those who come immediately to mind are the major female TV stars of the '50s, '60s and '70s whose work changed the game in one way or another. I'm struck by the fact that they accomplished so much -- often through the careful creation and protection of iconic television characters who motivated and inspired millions of women (and men, for that matter) to reach for more in life, while never failing to entertain. Sadly, there are now younger generations in place that are not familiar with them. This series will attempt to correct that.

Consider Mary Tyler Moore who, like Lucille Ball before her, is often confused with her most memorable television character, in her case WJM-TV news producer Mary Richards. It is often said that Norman Lear elevated situation comedy in the '70s with his wave of contemporary, controversial sitcoms that began with the arrival of All in the Family in 1971. But in terms of transforming a genre -- of altering basic assumptions and expectations of an entertainment format -- The Mary Tyler Moore Show, which debuted in 1970, got there first. With every one of its moveable parts remaining in perfect sync throughout its run, The Mary Tyler Moore Show became an entertainment and cultural phenomenon that remains as important now as it was then.

Ms. Moore was fresh off a career-making run as sweet and sexy housewife Laura Petrie (“Oh, Rob!”) when she took on the role of Mary Richards (“Oh, Mr. Grant …”), a single, 30-year-old woman who liked men but didn’t necessarily need to have one around (which was a good thing, since no man was good enough for “our Mary”).  She had a job that fulfilled her, demanded respect and better treatment on the job, and was able to support herself. There had never been a female character like her on television. The creators of the show wanted Mary to be divorced but CBS wouldn’t allow it. That was pushing things too far in 1970. How interesting that, seven years later in the third season of spin-off Rhoda, we watched in something approximating real time as Mary’s best friend Rhoda Morgenstern (Valerie Harper, pictured below left with Cloris Leachman, center, and Mary) struggled through a separation and divorce from the love of her life, Joe Gerard (David Groh). We had never seen that on television, either. 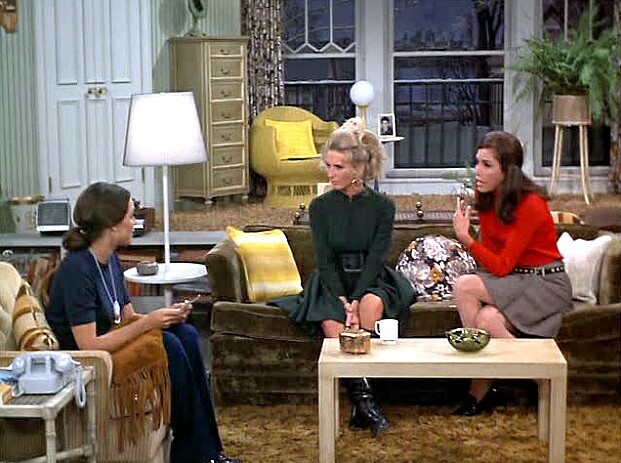 I could write thousands of words about my admiration for this show and all the people involved in it, but instead I will focus on one talking point -- something that very recently came to me. Perhaps one of the reasons people will always love Mary Richards and cherish her even more today than they did decades ago is that she was always polite -- even when she was angry. The only series to come along since this one that revolves around someone who is unerringly polite is the very new Ted Lasso on Apple TV+. Mary was a good person, which meant that she was sometimes taken advantage of; but it also meant that people loved her. Tough to get a handle on, isn’t it?

Adding to the mystique of The Mary Tyler Moore Show was the fact that CBS scheduled it on Saturday night for its entire seven-year run. In tandem with other shows that came and went from the night’s historic lineup (including All in the Family, M*A*S*H, The Bob Newhart Show and The Carol Burnett Show) it was suddenly cool to stay home on Saturdays, often referred to as "date night" or "the loneliest night of the week."  All of that was irrelevant when Mary and her friends were around.

Following, to a degree, in the footsteps of Lucille Ball, Moore parlayed her success (on The Dick Van Dyke Show) and her marriage to a television executive (Grant Tinker) into a career behind the scenes as well, helping to run the production company that bore her initials (MTM). There was a hint of Lucy on camera, too, in the unbreakable bond of friendship between Mary and Rhoda. Not since Lucy and Ethel had we watched two women support each other with such love and sincerity. We didn’t see that again until the arrival of The Golden Girls, with its four-way friendship between Dorothy, Rose, Blanche and Sophia, and then HBO’s Sex and the City with Carrie, Samantha, Charlotte and Miranda.

It seems that stories centered on strong connections between women aren’t all that easy to write. But that was never a problem on The Mary Tyler Moore Show, which throughout its run employed more female writers than had any other program in television history (including the truly talented Treva Silverman and Susan Silver). Maybe that’s why its comedy, and its heart, were so dismantling -- and why so many episodes of the show still feel utterly perfect so many decades later. To date it is an unmatched blend of sweet sophistication, smart writing and skilled silliness, the latter always in strong supply thanks to such characters as nitwit anchorman Ted Baxter, self-absorbed busybody Phyllis Lindstrom (Cloris Leachman) and Happy Homemaker Sue Ann Nivens (the incomparable Betty White). 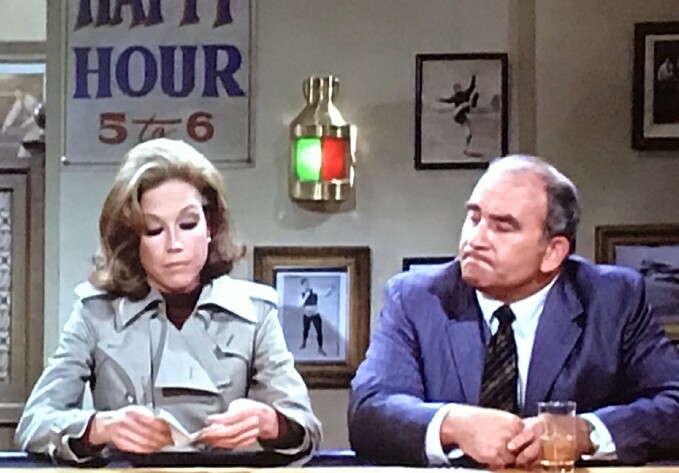 Mary, Rhoda, Phyllis, Sue Ann, Georgette (Georgia Engel) -- and Phyllis’ wise-beyond-her-years teenage daughter Bess (Lisa Gerritsen) -- could not have been more different from each other. But they were each fully developed, multi-dimensional females of their time who played off each other with dazzling dexterity. To date, The Mary Tyler Moore Show may just be the best showcase for adult actresses that television has ever given us. (I’m including recurring guest stars Nancy Walker, Nanette Fabray, Eileen Heckart, Joyce Bulifant, Priscilla Morrill, Irene Tedrow, Beverly Saunders, Barbara Colby and Penny Marshall in that memorable mix, too.)

The men -- Ed Asner (above right), Gavin MacLeod, Ted Knight, John Amos -- certainly held their own opposite those formidable women. Overall, they comprised as perfect an ensemble as television had ever seen, absolutely without equal until Frasier came along. But as strong as The Mary Tyler Moore Show was on camera and behind the scenes, it would not have worked at all without its trailblazing, tam-tossing star at center.

Also in this series: